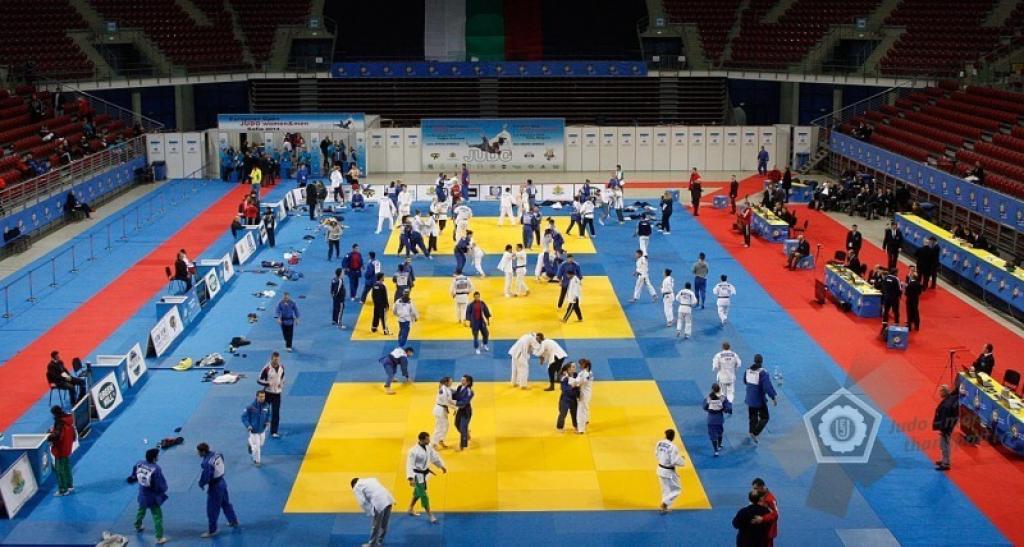 On the first day the lightweight categories came together in action and host nation Bulgaria took a gold medal in the category U60kg.

Yanislav Gerchev set the tone for the final block, cheered on by many fans and coach Georgi Georgiev, who in 2002 was the last Bugarian to win the tournament. It was a nice gift for the coach who celebrated his birthday at the day of the draw. On Saturday Gerchev proved too strong for his four opponents on his way to the gold. In the semi final he defeated Nabor Castillo of Mexico and in the final was able to overcome Artiom Arshansky of Israel. Bronze went to Michael Iten (SUI) and Mikos Salminen (NED). Israel performed well today with one gold medal and two silver medals. Golan Pollack won the U66kg category. He was the highest ranked judoka and won his second World Cup, for the last time in 2011 (Tallinn). But today Pollack proved to be among the top players in the world in this weight. He defeated Dzmitry Shershan of Belarus in the final. With 32 players this was the best seeded category. Akil Gjakova won a bronze medal and was the youngest medallist among men with his 18 years. His compatriot Distria Krasniqi delivered today with a gold medal, also she is just 18 years and the among the youngest ever winners in Sofia’s history. Only last year Sara Asahina (JPN) was 16 years when she won in Sofia. Krasniqi defeated Bulgarian hope Borislava Damyanova who caught Valentina Moscatt (ITA) by surprise with an excellent ippon. But Krasniqi defeated the young Bulgarian as well as 2012 European U20 and U23 Champion Dilara Lokmanhekim (TUR). In the men’s category, Scottish Patrick Dawson won his first ever World Cup on European ground. In the final U73kg he beat Sagi Muki, the strong Israeli. This matches his Pan American gold last March. The category U52kg was one of the most interesting categories with a good line-up. In the end it was the experience and fighting spirit of Romy Tarangul that helped her to take the gold. Tarangul fought some tough matches and the one against Junior World Champion Sappho Coban may have been the strongest opposition. After her she defeated Miranda Wolfslag (NED) and Tatyana Levytska waited in the final for a dinner for two. Levytska had to pay but won the silver, her best ever European result. Tarangul had won a gold medal for the last time in 2011 and now defeated both Coban and Kraeh in a few months time. Italian Youngster Odette Giuffrida defeated Coban for the bronze. Mariya Buyok (UKR) overcame Wolfslag. Hedvig Karakas was happy to take the gold U57kg. The Hungarian Champion won her last World Cup in 2011 and a success was welcome for the number five of the Olympic Games. Karakas defeated Dutch Carla Grol in the final. In the semi-final Karakas beat Juul Franssen (NED) who won bronze in quite a strong field where the older judoka prevailed over the challengers such as Fabienne Kocher who did reach the semi final but could not hold the pace. In the category for women U63kg no big surprises. The gold was kind of expected for Tina Trstenjak who was last year’s clear leader in the European Cup ranking, but the number five of the last World Championships showed her status by defeating strong Jennifer Wichers (NED) in the first round, Daniela Kazanoi (BLR), rival Nina Milosevic (SLO) in the semi final and strong Italian Edwige Gwend in the final. Compatriot Milosevic finished with bronze and Ekaterina Valkova (RUS) won bronze too. Tomorrow will see more action from Sofia where the men returned after an absence of 12 years. Watch See all pictures in our gallery: http://www.eju.net/media/?action=media&mode=showEvent&id=1613&index=84&eventId=1613