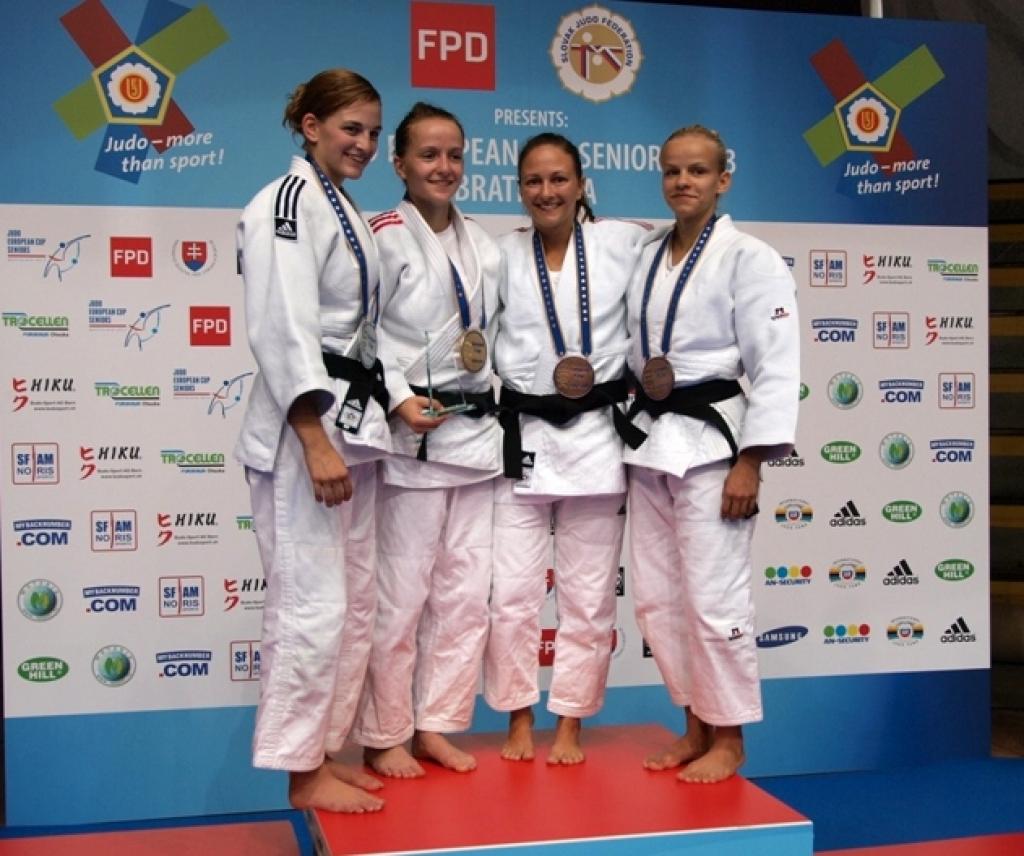 Seven different nations won a gold medal at the first day of the inaugural European Cup in Bratislava, Slovakia. Austria and Great Britain won the most medals.

Austria claimed the first gold medal in a category U48kg that was dominated by the Austrians. Nicole Kaiser, Austria’s talent in this category won gold in the final against another big talent Maria Tabea Kraft. Both judoka need an international success and both confirmed their current form. In the second minute Kaiser attacked by ouchi gari and led by yuko until the end. Even a bronze medal for Valentina Schauer, also Austrian. In March Nicola Kaiser also won the national senior championships in Austria and she also won the Junior National Championships in the final against Kraft, stating that Kaiser is the number one choice aged 18 years young, same age as Kraft. Kristina Vrsic won a bronze medal for Slovenia by osaekomi. Anna Dengg won a bronze medal for Austria U52kg but the gold was for Maria Ertl of Germany. In the final she defeated Kelly Edwards of Great Britain by -o-uchi-gari. Edwards defeated Dengg in the semi, Ertl beat Karolina Pienkowska of Poland. Both losers of the semi finals won the bronze medal. The event is a good warm-up for the European Championships for Juniors in Sarajevo from 20-22 September. A good success for Andrea Bekic of Croatia winning the gold U57kg by a great ko uchi gari for ippon. Bekic was very strong in 2011 and 2012 but needed an international success after some backdrafts, so in Bratislava she was pleased to defeated Noa Snir of Israel in the final. Connie Ramsay (GBR) won a bronze medal after she lost to Bekic in the semi. Evelyne Schopp (SUI) continued with bronze in Bratislava. In July she won bronze in Sindelfingen’s European Cup. Great Britain saw gold in the women’s category U63kg by Sarah Clark. The experienced 35-year old Clark competed at World Championships and Olympic Games and was too strong today (ippon) for Austria’s talent Magdalena Krssakova (19) who claimed a silver position. Clarks last victory dates from July 2011. Another experienced Olympian; Ioulietta Boukouvala (GRE) won the bronze, senior rookie Jemima Yeats Brown remains steady with a nice bronze medal after her loss to veteran Clark. Finnish lightweight Vadud Balatkhanov won a gold medal U60kg in the final against David Pulkrabek CZE). Pulkrabek led from the beginning Pulkrabek with one shido. In the third minute Balatkhanov scored yuko and won by shime waza. Another big talent Bernard Azinovic of Croatia won bronze, Alexandre Boucher of France joined the podium. Many Hungarian participants in Bratislava but only Gavor Hagyo was successful on Saturday, he won the gold U66kg. He’s the bronze medallist of the national U23 championships, but today he was the best among 27 participants. In the final he defeated Mathias Le Boucher of France. Farid Ben Ali (FRA) won bronze in a beautiful fight against Poliak of Slovakia. Also French Hugo Fonghetti won bronze, the third French on the podium. Italy’s Marco Maddaloni was motivated to fight again. The 28-year old brother of Olympic Champ and current coach Pino Maddaloni is still capable to win the gold U73kg. This time he was the winner, in July he won bronze in Sindelfingen. The European U23 Champion of U23 had never won a European Cup level event, so this is a party worth while. His opponent was Dutch youngster Joery Biekmann. Germany’s Julian Kolein won bronze with Czech Vaclav Sedmidubsky. The event was witnessed by the vice president of Slovakia Mr. Miroslav Lajcak who saw many ippons at the opening day. Host Slovakia was close to a medal with two fifth places, tomorrow more chances. Follow the live feed here: http://www.judo.sk/articles/2013/08/27/europsky-pohar-bratislava-2013