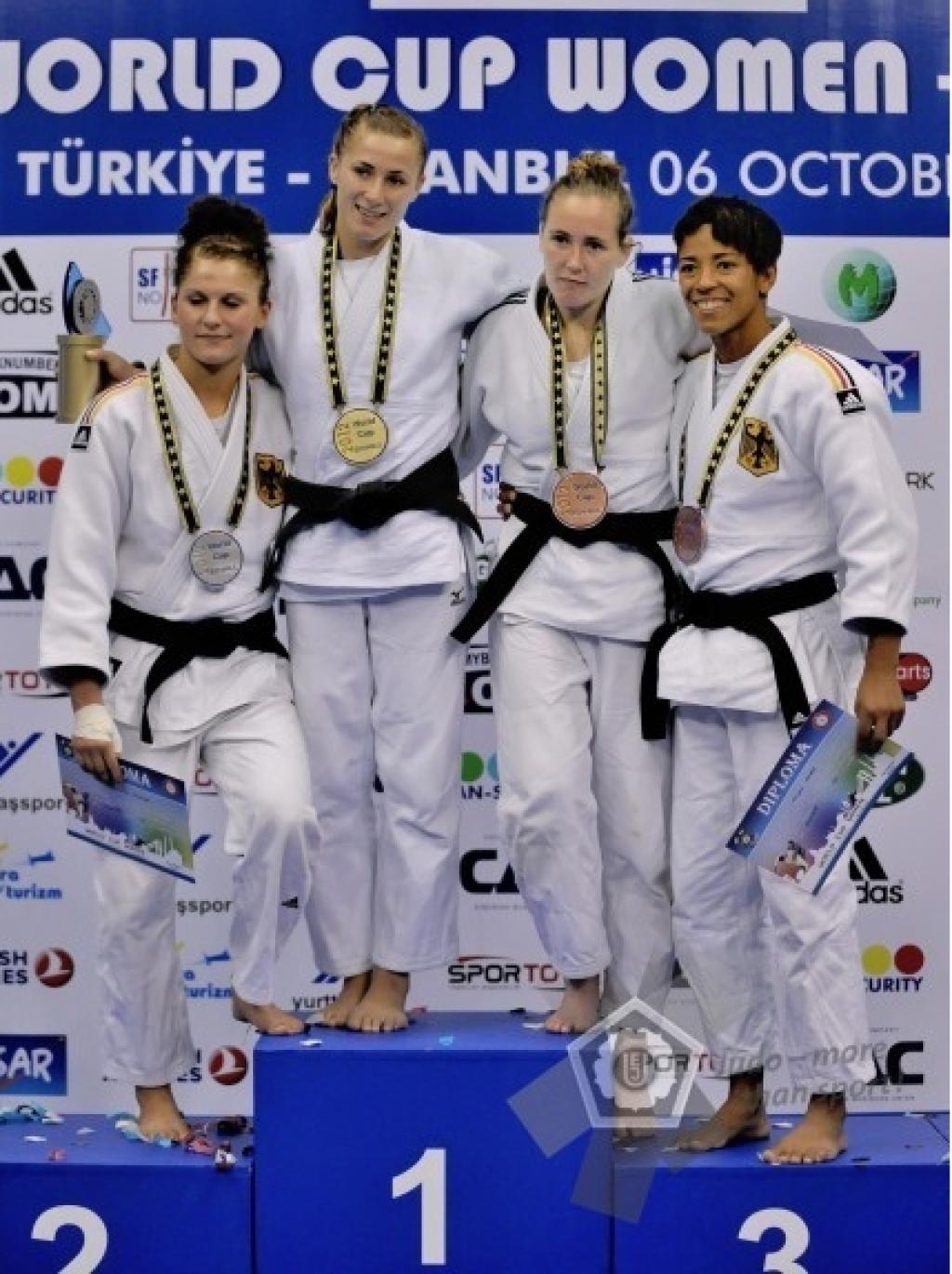 Although Germany and Turkey dominated the medal tally, the gold medals were distributed among seven different nations. The first World Cup in Istanbul was a success and Turkey celebrated the birth of a new era starting with organizing the World Cup and recently signed an agreement for the organization of the first IJF Grand Prix in Samsun. Most of all sports benefit with six medals in total for Turkey, just one less than Germany.

Turkey has a big choice in light weights. The Turkish women are building a reputation when it comes to successful lightweight women stepping out of the footsteps of junior judo. On Saturday it didn’t result in a gold medal U48kg but in silver and bronze. The gold was for Aurore Climence of France who defeated her three opponents including Turkey’s favourite Sumeyye Akkus. Akkus had to win three matches first to get to the final. Dilara Lokmanhekim, the new promising talent with the European junior title in her pocket claimed a bronze medal. Shira Rishony (ISR) won bronze as well.

The youngest winner of the weekend was Ivelina Ilieva of Bulgaria. Ilieva collected medals at European Cadet Championships and European and World Junior Championships and was successful in the seniors U23 winning bronze at the European Championships. She won two European Cups in Belgrade last year and Istanbul this year. A good experience to win as well as World Cup level in a strong field. The finalist, Johanna Mueller is in a very good shape and is Germany’s Champion in this weight category U57kg. However it was Ilieva who confirmed her first head-2-head confrontation at the U23 European Champions in Tyumen last year.
British Champion Connie Ramsay and Germany’s Olympian Miryam Roper won bronze. Ilieva states with her win she is on track for the 2016 Olympics and knocking on the doors. Next goal the European U23 title.

Tina Trstenjak is in a bloody good shape as well. The Slovenian won the World Cup in Rome and added the second consecutive win this weekend in Istanbul. Coached by Urska Zolnir Trstenjak was able to defeat Claudia Ahrens of Germany. Ahrens defeated Slovenian Vlora Bedzeti who is one of the many possible candidates to become the successor of Urska Zolnir. However she is of a special level, maybe a good level to become a good coach. At least nice to see that it results in success for Trstenjak winning all her four matches.

Germany won the gold after all. 27-year old Elisabeth Greve won the final against Iljana Marzok. Greve won silver at the World Cup in Bucharest when she lost against the later Olympic Champion Lucie Decosse. She fought the final against another German woman, Kerstin Thiele was appeared to be the one to qualify for the Olympics where Marzok was the number one choice for a long time. Luxury for Germany in this category was strong for years with German women such as Yvonne Wansart, Annett Boehm, Heide Wollert and above mentioned ladies, all at least 26 years. The more interesting to see the development of European U23 Champion Laura Vargas-Koch.

Catherine Roberge completed the Canadian success of this weekend taking a gold medal U78kg. It was four years ago when Roberge won a World Cup. The 30-year old Canadian was the oldest winner this event. Amy Cotton was 2 years older when she won the Grand Slam in Moscow this year, but not surprisingly Nicolas Gill is working on a new young team as the gap between young and old is too big.
Perfect silver medal by Ivana Maranic (CRO), her fourth international medal this year.Germany won another two bronze medals by Delorme and Tillmanns.

Not surprisingly the dessert was for Turkey with its strong women Kaya and Kocaturk. In international events was used to be Kocaturk to win. Kocaturk also went to the Olympics in London. Now it was the two year older Belkis Zehra Kaya to take the victory in Istanbul.
Thirteen medal winning nations out of 17 is a good distribution. Germany and Turkey were most represented in the finals.

Watch all photos of Minsk

or review the results: