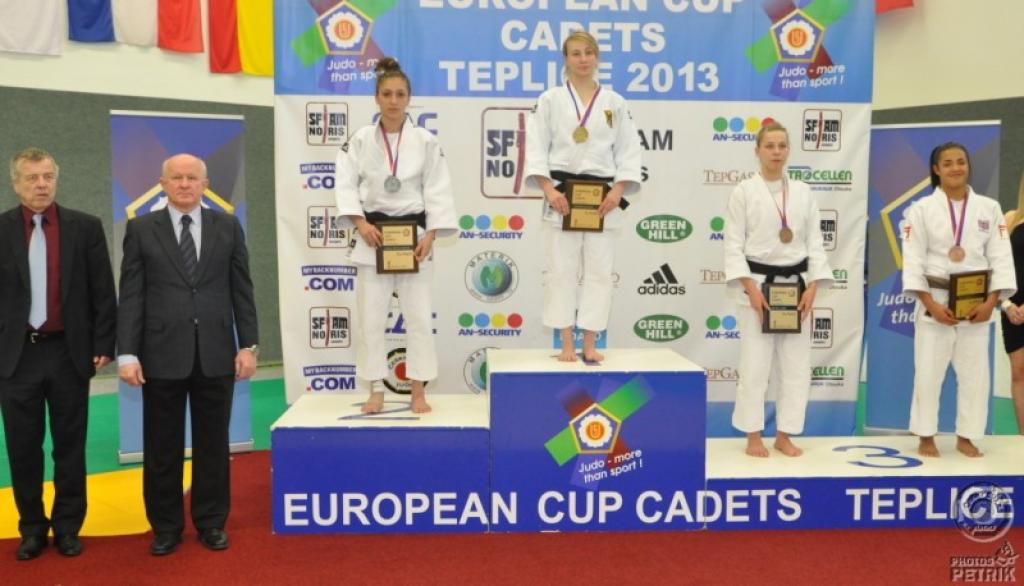 The program was divided again in two blocks and the first final block started at 2 p.m. and the home crow supported Paulusova in her bronze medal fight in +70kg category.  Although she lost the fight she is a hope of the Czech judo and did extremely well in her first cadet´s appearance.

Schwille of Germany fought Dobre of Romania in the first final of the day in -57kg. The German girl soon gained a lead with o soto gari (wazaari) and later she countered the Romanian o soto gari for ippon.

Majdov of Serbia appeared in his third final in Teplice during his cadet´s career. In 2011 he won silver in -60, the next year he won -66 kg and this year he reached the final again in -73kg. In the final he met Malic of Monte Ngro and hoped to repeat the result from Zagreb where he defeated him. But Malic took a lesson and did not give a real chance to Majdov in the final. Majdov was penalised for passivity and then Malic threw him for yuko with an ashi waza technique.  With the end approaching  Majdov put everything in attacking but Malic caught him unprepared and threw him for an ippon with a nice uchi mata.

The fifth gold from Teplice won Goshin for Germany. In the +70 kg final she defeated her team mate Bauernfeind by penalties.

The second final block started at 17:45 and Scoccimarro of Germany won the sixth gold for Germany. At the end of the first minute she threw Tintor of Serbia with a nice o soto gari.

Mircea of Romania did not need much time in the +90 kg final either. He threw Spijkers of Netherlands with  uchi mata for ippon in just  31 seconds.

in -90 kg Jayne of Great Britain defeated Nenartavicius of Lithuania. First he scored yuko with yoko shiho gatame then he threw the Lithuanian for wazari. Despite of several good attack  Nenartavicius did not score  and Jayne finally managed to score another wazaari with kami shiho gatame.

The only girl´s final Germany lost in Teplice was the -63 kg. Gercsak of Hungary who placed third last year defeated  Reiman of Germany. Gercak was clearly better during this match throwing her opponent for yuko and 2 wazaari.

Schenider of Austria won -73 kg last year. This year he moved up into -81 kg but managed to repeat his victory. In the final fight he threw de Wit of The Netherlands in 21 seconds with a beautiful soto maki komi.