SHOWTIME FOR HOLLAND ON SECOND DAY OF EUROPEAN CUP WROCLAW 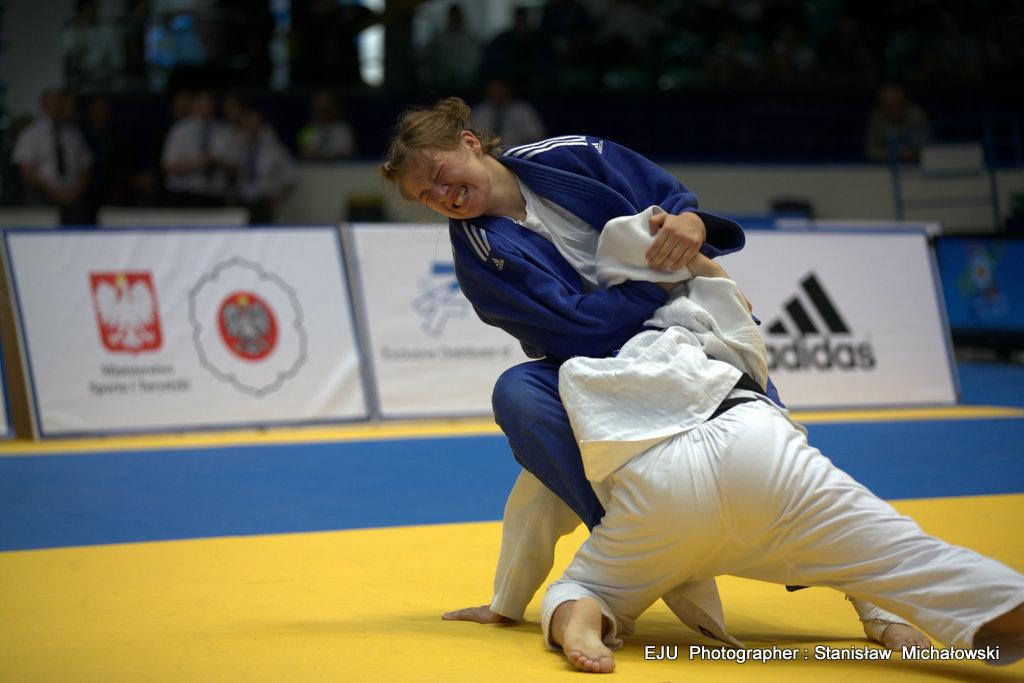 The European Cup for Juniors in Wroclaw closed on a successful note for the Dutch team, with the first 4 national anthems ringing out for the Netherlands who collected 4 gold medals on the second day. It was not quite enough for the overall victory that was captured by Germany who had already won three gold medals on day one.
In the same venue that will host the European U23 Championships, the Dutch warmed up not only for the forthcoming European Championships for Juniors in Bucharest but also the World Championships later in October in Miami.

The first victory was for current junior European and junior World Champion Do Velema NED who in the U63kg category final between two 18 year olds defeated Buga Kovac CRO. The next gold medal went to the hugely talented Frank de Wit NED who, in an exciting final against his compatriot Rico Harder, fell behind early when Harder scored with wazari. But Harder gave away the gold when De Wit caught him for wazari and followed up with osaekomi.

There was gold too for Holland’s junior sensation, Sanne van Dijke, who in her opening contest defeated Croatia’s pearl and current Junior World Champion Barbara Matic. It was not a case of Matic underestimating her Dutch opponent, but the Croatian simply couldn’t handle van Dijke today. On her way to the final Van Dijke defeated Gregor (GER) and Matniyazova (UZB). In the final Monika Burgess CAN proved a tasty last meal for the greedy Dutch fighter who hasn’t been defeated for more than a year and with Wroclaw added her seventh European Cup victory.
One of the most promising Dutch talents is U90kg Michael Korrel, who continued his success by taking gold against the surprising Robin Monteyne BEL. The Belgian can be happy with a solid performance but Korrel was clearly the best in a field of 23 rivals.

Good success too for The Ukraine winning two medals in Wroclaw, one gold medal was pretty much expected for Anastasiya Turchyn, although the tough Japanese Asian Champion Takayama Rika gave Turchyn, the U23 European Champion, a good contest. Turchyn will likely return in Wroclaw in November to defend her title. Philipp Galandi GER was the expected winner for men in the U100kg category, despite some good competition from some of his German team mates. In the final Nell Ariano Rebouka FRA had no answer to Galandi the Frenchman losing by ippon.

In the women’s heavyweight category there was gold for Germany, which proved decisive for the final medal table. Michelle Goschin overcame junior Asian champion Fujiwara Emi JPN in the final. The heavyweight men had to concede that Messie Katanga FRA was today’s best. Among twelve participants Katanga won all three matches and Sebastian Fagerhill GER was his last victim. Katanga’s first European Cup victory will likely not be his last and we will see him, and hopefully all gold medallists, next at the European Championships in Bucharest.
The Polish Judo Association invites everyone to visit Wroclaw for the European U23 Championships from 14-16 November. Poland celebrated three bronze medals at this event.

Review all medallists of day 2 and read our review of Saturday.

For the all the results please click on: http://judolive01.lb.judobase.org/www.judo-world.net/eju/european_cup/ecup_jun_wroclaw2014/tta_menue_eju.php?modus=1024&sprache=english
Watch all the photos in our photo gallery: http://www.eju.net/media/?mode=showEvent&id=1817