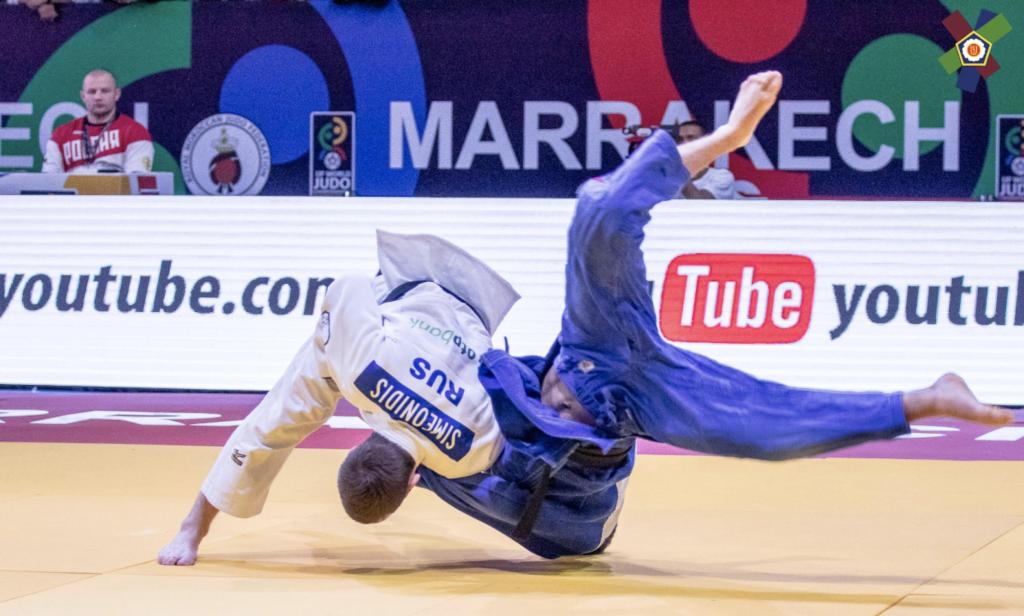 The Junior World Championships in Marrakech has officially begun, with four athletes already claiming the 2019 title in the -60kg, -66kg, -48kg and -52kg categories, yet only one European managed to reach the top of the podium. Konstantin SIMEONIDIS (RUS) who took a silver in the Junior European Championships in 2018, has now taken the most desired junior title today, and in his final year as a junior competitor, it couldn’t be better timing.

The preliminary contests didn’t put too much pressure on the 20 year-old SIMEONIDIS, however he had been apprehensive as he hadn’t come across all of his opponents previously including Joshua GILES (GBR) in the third round,

He was quite a difficult contender, I didn’t know him at all to fight but I expected something new and different and he was very strong but in the end I was better and I won.

His final contest against 2019 Junior European bronze medallist, Ahmad YUSIFOV of Azerbaijan was always going to be a tough one, both competitors securing their wins with strong seoi nage attacks throughout the morning. The same style proved an issue for the young men and took them both in to golden score as both were able to defend. Eventually, SIMEONIDIS pushed through with a seoi movement to get a reaction and overstretched for the opposite leg, attacking with o soto and driving his opponent to the ground, scoring and taking the win.

Though all of his previous contests were won by ippon, the last was the one to break his streak with the waza ari score, however this did not diminish his abilities in any way as he demonstrated a high level and variety of judo throughout the day.

All together, Europe claimed six of the sixteen available medals today and put on some incredible performances. The -60kg category was the most populated by the Europeans with the gold from SIMEONIDIS, the silver going to YUSIFOV and a bronze medal going to Salih YILDIZ (TUR).

The Turkish -60kg medallist actually took the gold medal at the Junior European Championships only last month in Vantaa, Finland. Impressively, his sister, Ozlem, took the Cadet European title this year in the -57kg category as well as the EYOF title and it looks like the pair will continue to make their mark with their fantastic skill set.

Shirine BOUKLI (FRA) managed to take another important medal in her final junior year to match her Junior European success in the -48kg category. Though a hard fought day, BOUKLI didn’t quite manage to snatch the gold medal from her Japanese opponent, KOGA Wakana, but was still elated with this tremendous achievement in Marrakech. Andrea STOJADINOV (SRB) tried to better her performance of bronze in Nassau last year but was still happy with another Junior World medal to her name as she missed out in Vantaa, defeated by todays silver medallist, BOUKLI. There is no doubting her capability though as she is still the holder of the U23 European title and has chance to defend it in Russia.

The -52kg category European women were unfortunate to miss out on the podium, the closest to a medal was Naomi VAN KREVEL (NED) who took a fifth place.

Azerbaijan was pleased to take a second medal today, this time in the mens -66kg category. Ibrahim ALIYEV also took a bronze medal in the Junior European Championships this year but stepped up today to face his opponents from around the world including Richard MARIN (USA), Andre PARICHE (VEN) and Willian LIMA (BRA). Unfortunately the latter, and eventual Junior World Champion, put ALIYEV in to the repechage which he fought through to face Lucian BORS DUMITRESCU (ROU) who was a tough opponent. Just over two minutes in to golden score the Romanian was dealt a third shido which handed the bronze medal to the Azeri.

There is much talent on the horizon tomorrow and will be interesting to see if Europe can take up a few more podium positions, though the athletes today made a great start to the overall medal haul. Tomorrow we will see the -57kg, -63kg and -73kg categories compete, with all three Junior European Champions; Eteri LIPARTELIANI (GEO), OZBAS Szofi (HUN) and Victor STERPU (MDA) all in the running for more junior success.