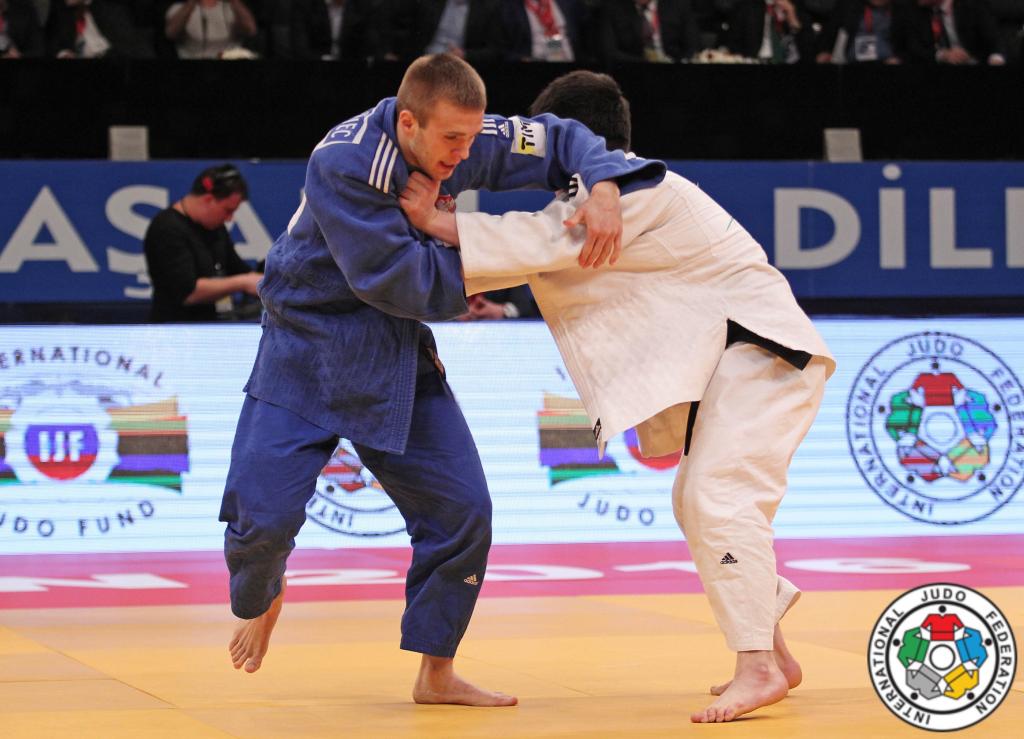 An impressive and solid display of judo by Damian SZWARNOWIECKI (POL) brought the 22 year old success in the shape of a gold medal in the -73kg category on the second day of the Samsun Grand Prix. It could all have ended before it had begun when in his opening contest Szwarnowiecki made an error whilst attempting a turn over in ne waza against Kahill REBAHI (QAT). The Qatari managed to catch Szwarnowiecki in kesa gatame before the Polish fighter wriggled free after a few seconds. Thereafter it was all Szwarnowiecki as the polish fighter took control of every exchange, particularly in ne waza, before throwing the Qatari with a neatly timed left ko uchi gake for ippon with 1:40 remaining on the clock.

Next up was Dilgam ALIYEV (TUR) who was given no chance to shine in front of his home crowd, Szwarnowiecki swarming all over the Turkish fighter in the first ne waza exchange and applying ushiro sangaku gatame from which Aliyev submitted. In the quarter final Szwarnowiecki faced Nuno SARAIVA (POR). The Portuguese fighter found it extremely difficult to cope with Szwarnowiecki’s busy style, in particular in ne waza where the Polish fighter controlled every exchange eventually securing a submission from Saraiva with sangaku jime. Szwarnowiecki’s semi final opponent was home favourite Hasan VANLIOGLU (TUR). This was a good match up with both fighters giving everything. But, toward the end of the contest, as Vanlioglu began to tire. Szwarnowiecki managed to catch the Turkish fighter first with o goshi for waza ari and then in the following ne waza encounter the Polish fighter applied ude hishigi ashi gatame from which a rather tired looking Vanlioglu submitted.

In the final final Szwarnowiecki faced (up to that point at least) arguably the player of the day in Kim Chol Gwang (PRK) who had thrown all his five opponents for ippon. But the 20 year old North Korean found Szwarnowiecki a more difficult hurdle to climb and ended being caught himself by Szwarnowiecki with ko uchi gake for waza ari and with that the gold medal went to Poland.

Asked to sum up his day, Szwarnowiecki said, “This is the best day of my competitive judo life. I started the day knowing that I needed the points. I’m hoping for more points in the coming tournaments in order that I can go to Rio and fight like I know I can.” There can be few people who at the beginning of the day would have picked Szwarnowiecki as the eventual gold medallist. “I know that my win will come as a surprise to many and I too was surprised as there were a lot of good opponents in the category. But today was my day and I defeated some good fighters,” said Szwarnowiecki.

Given his relative inexperience it is unsurprising that Szwarnowiecki is facing many of his opponents for the first time. Indeed, he had not previously come up against any of his five opponents today. Additionally, he is not alone with regard to never having faced new-comer Kim Chol Gwang of North Korea. “I did not know the North Korean but I spoke with my coach who gave me some good advice on the kind of attacks I should use. I also tried to engage him (KIM) in ne waza which I like but he had a good defence,” said Szwarnowiecki. With regard to the forthcoming Olympic Games the Polish fighter was hopeful saying, “It would be great to go to the Games as it is a dream of all sportsmen.”