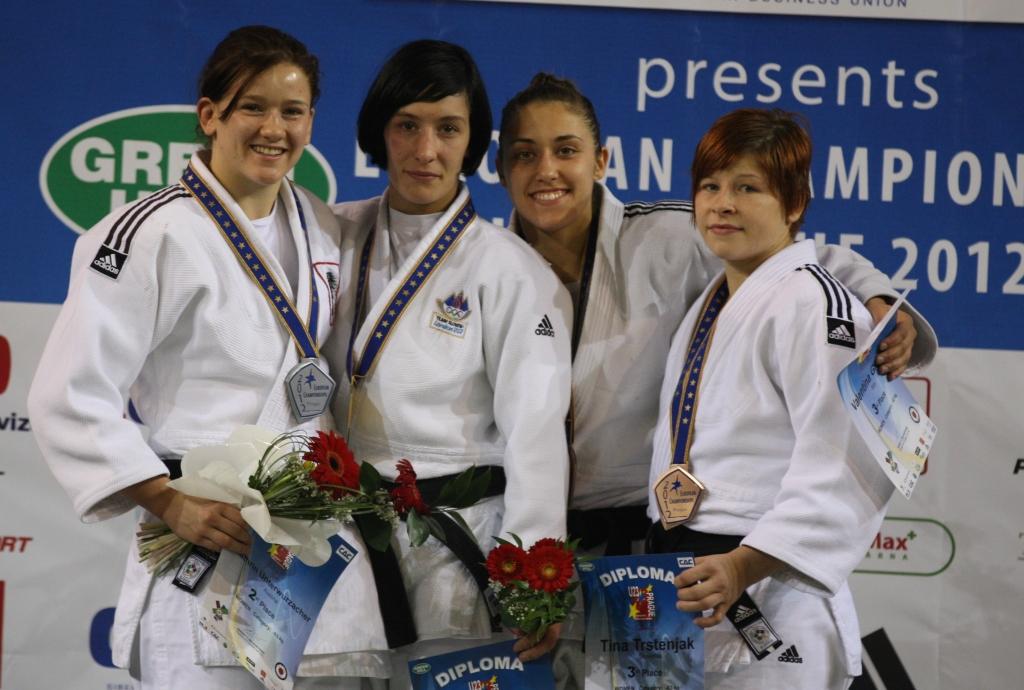 For the first time in history Slovenia claimed the European U23 title in the women’s division. Nina Milosevic was the strongest today with character judo and despite the strength of the field she was active, dangerous and deserved the victory the most.

In the final she had an experienced opponent in Kathrin Unterwurzacher who defended her U23 European title of last year.
Her opponent Nina Milosevic is in shape. She won the European Cup in Belgrade in October and collected some good medals this season. The Slovenian is one year older than Unterwurzacher and this year they both won one match against eachother.
But also Unterwurzacher is despite her age of 20 used to senior level as well. She won the Grand Prix of Abu Dhabi in October.

It was Milosevic who took the initiative in the beginning with a strong hip throw she scored a waza-ari after almost two minutes in the match.
Milosevic scored two additional yuko and didn’t give Unterwurzacher to get into the game.
An extreme strong category with just three nations in the three medal fights. Austria, Slovenia and Italy.

In the match for bronze, two Italians had the compete.21-Year old Valentina Giorgis and 22-year old Edwige Gwend. Gwend is the Olympian, former U23 Champion and vice European Champion of 2010 but she lost in her semi final against the strong Nina Milosevic. Giorgis lost against Unterwurzacher in the quarter final but came back in the repechage. Against Gwend Giorgis took the lead and didn’t gave it away against Gwend who seemed mentally empty after her exhausting match and loss against Milosevic.

Tina Trstenjak of Slovenia won the second bronze when she claimed the victory against Magdalena Krssakova of Austria. Trstenjak scored first but in the last minute Krssakova scored the equalizer.In the golden score Krssakova reveived her second penalty which meant the bronze for Slovenia.
Strong nations in this championship Slovenia, Italy and Austria. What a success for Slovenia taking two medals in this category where Urska Zolnir is the current Olympic Champion. The olympic vibe seems to have its effect in Slovenia.