SMYTHE-DAVIS BACK TO WINNING WAYS WITH GOLD MEDAL IN BRASILIA 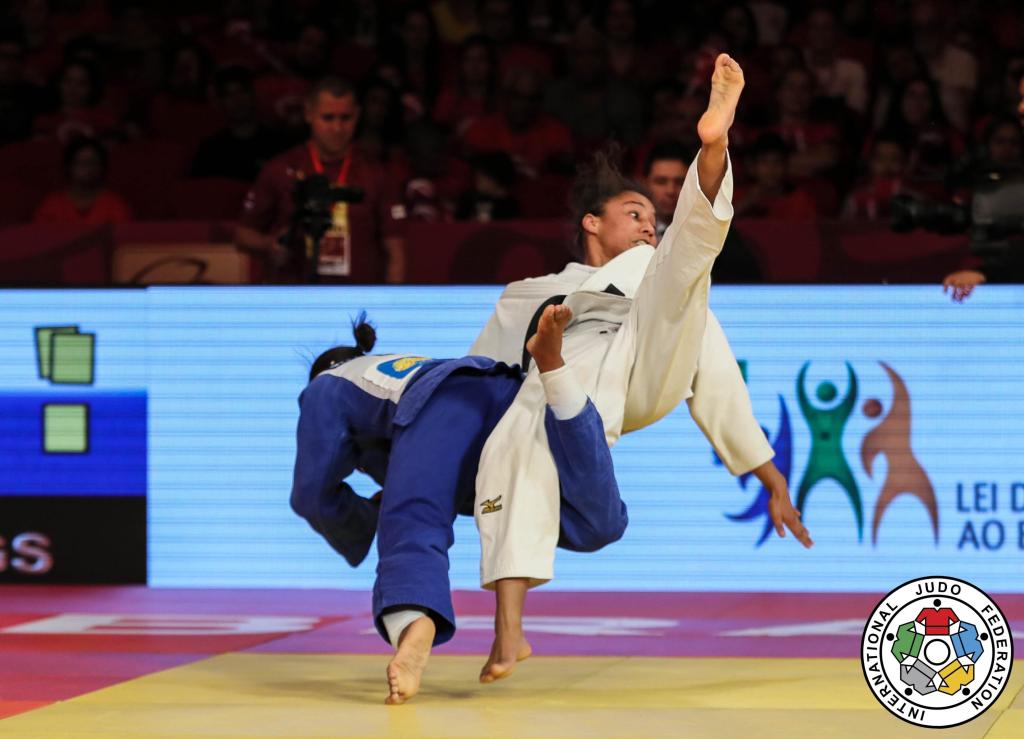 The opening day of the Brasilia Grand Slam saw Nekoda SMYTHE-DAVIS (GBR) take the gold medal in the -57kg category. As number three seed Smythe-Davis had the benefit of a first-round bye. In round two Smythe-Davis faced Pan-American championships silver medal winner, Tamires CRUDE (BRA). Unfortunately, it was not the best of contests from the Brazilian who ended up collecting three shidos and bowing out of the competition rather tamely. This put Smythe-Davis into the quarter final where she faced Olympic bronze medallist Telma MONTEIRO (POR). The two had met earlier in the year in the quarter-final of the Zagreb Grand Prix when Smythe-Davis had emerged the winner. Monteiro proved as difficult an opponent as she always has been and it was only on the back of the Portuguese collecting three shidos that Smythe-Davis progressed to the semi-final. Here Smythe-Davis faced 2018 European champion Theresa STOLL (GER). This was a third meeting for Smythe-Davis against the 23-year old German, the British athlete having won the previous two. Both athletes collected two shidos and the contest went into golden score where after three and a half minutes Stoll attacked with ko soto gake only to find herself countered by Smythe-Davis with o uchi gari for ippon.

In the final Smythe-Davis faced 21-year old Ketelyn NASCIMENTO (BRA) who was making her first appearance in a Grand Slam, a terrific achievement. On her way to the final Nascimento had defeated the number one seed and current Olympic champion Rafael SILVA (BRA). Smythe-Davis was again taken into golden score and once again the British Athlete proved up to the task when after 1:38 of golden score Smythe-davis launched a huge o soto gari attack that brought Nascimento crashing onto her back for ippon.

When asked about her expectations at the beginning of the competition Smythe-Davis:

I didn’t come with the aim of winning the gold medal. I just wanted to put in a good performance. The real thing that I will take from here is level of my performance; the gold medal is a bonus.

With regard to her return to the IJF circuit after injury Smythe-Davis said,

I think as athletes we all go through tough times and I am glad that I can make a point and show people that I am still here. This medal does that, and I can now move on to the next one.

Describing the winning technique in the final Smythe-Davis said,

I’d tried it a couple of times earlier in the contest and hadn’t caught her. In fact, when I did throw her, I didn’t realise that I’d scored as she was back up on her feet so quickly. I had to look at the referee and as he signalled ippon I though, ok, job done.

With regard to what was next on her schedule Smythe-Davis said,

I am going to compete in Abu Dhabi in a couple of weeks’ time. My aim for the rest of the year is to get as many contests as I can.