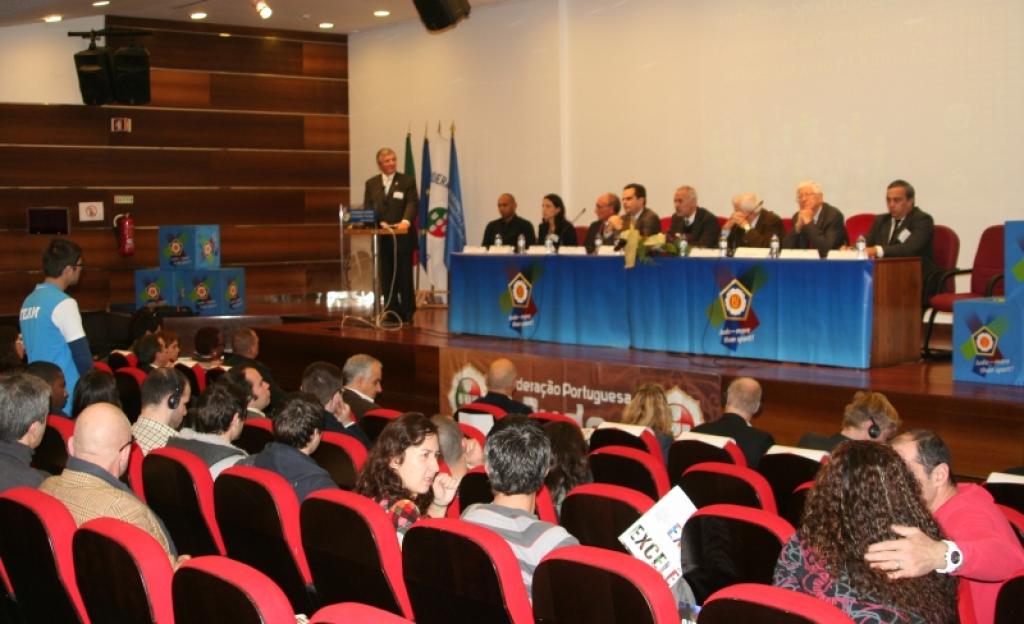 At the Social Inclusion Congress in Lisbon judo was the role model sport among discussions regarding the topic of social inclusion. At the seminar at the ground of the Lusofona University many delegates came together from various areas. Universities, the government, the judo federations in Portugal and Europe, the national Olympic committee, athletes and foreign speakers with experience in the field of social inclusion.

Various top decision makers in Portugal were present to debate on the field of social inclusion. After some introductions a debate was held.
During the debate José Rodrigues, General Secretary of the Portuguese Judo Federation led the conversations and question as chairman of the debate.

Gianni Maddaloni, father of Laura, Marco and Giuseppe Maddaloni works near Napoli on social inclusion projects. He mentioned his strategy: “First of all you should work with your heart, than with your mind. We make the tool available. I worked at the university for 39 years and met many people in the field of medicine and they support me.”

“I started up with helping with patients with breast cancer. Actions are much more important than words. I am not a man of words. I received some funds but we cannot ask for the money, we have to work for the money and have the skills and develop it, only then we have the right for funds. That breaks through the negativity. I ask you, what is louder: a tree that falls, or a forest that grows? You need to do it.”

Frédérique Jossinet is 9 times medallist at European Championships and won three European titles. She was twice in the World Championships final against Ryoko Tani and won four World Championships medals. At the 2004 Olympic Games she won a silver medal. Now she setting up and helping the government and French Judo Federation their programs to move the society and integrate judo with jobs, with behavior.

Prof. Dr. Jorge Proenca, Director of the Faculty of Sport of the University of UHLT said: “I understand why judo has the slogan, ‘more than sport’. All sports should follow the example of judo.

Luisa Caldeira explained her case study “judo in Alta de Lisbon”, an outside area of Lisbon.
“Regular sports and healthy life style are the most important goals. To acquire social schools. At school they connect school with sport and get more appreciation.

Eduarda Correia told about her master degree as sports coordinator for disabled people of the Education Bureau in Portugal. “The importance and Easiness of Inclusion of Disabled people in a school context through judo”.

Franco Capelletti, vice president of the European Judo Union. “Jigoro Kano created judo for the development of the sport. Judo Ju = Technique, Do = way. The best physical and mental way. We are an Olympic Sport so it is important to win. My personal opinion is that after the ten Olympic Games I’ve seen, it is about winning. But there is another aspect of judo. The social aspect has the same importance. Judo is more than sport, and for me it is important to develop this aspect. At the clubs only 10% practices judo for the competitions, 90% practices judo for pleasure.”

After the debate Franco Capelletti, thanked the present debaters for this day. Whenever I suggested projects like this, to make judo and social inclusion in connection with young medal, people told me that very often that this is second rate judo. I don’t like to talk of myself but we have a big athlete here in Jossinet and a champion in Maddaloni of his own right. Nuno Delgado who’s done a number of good projects. They are all champions, you cannot define them as second rank champions. This is a great day for us.”

Vicente Carratalá Deval of the University of Valencia, the Spanish Judo Federation and EJU Education commission wants recognisation for the people who work in this field. “It is not easy to start these topics in this time of crisis, but our projects move forward. “

Also many participants responded in the debate and concluded that “the projects proceed despite the crisis, but still to buy judogi, mats and the first necessities. Also the people with special needs, need to have support and they still can’t.“

Also participants outside judo responded such as street football. “We started with a whistle and ball and a tight budget, three times per week. We came closer to the youngsters and there were no rules and there was no follow up of their activities. Now we have a project with five people with limit resources working in the needy neighbourhoods. Now we access to nutritionists, and other kind of help and find a way for a revenue source for us. Maybe judo can look at this and find volunteers to step by step and create a self sustainable project.”

Gianni Maddaloni: “We must not surrender but you must have a strategy. My life has taught me strategy. It is crisis, okay, but more often European funds are not well used and should only be used for these kind of causes. Once I had a blind boy in my dojo and he wanted to go to Rio. Blind people can see things that we can’t. I had big problems because after a while I got some funds but it dried up because of the crisis. This blind boy dreams about the Rio Olympics. He chose me to be his master. Being chosen by him gave me the strength to move forward. He is an a-social boy, like a cast away. All the dojos are like Lampedusa. And what do we do seeing him, thrown him back into the water?”