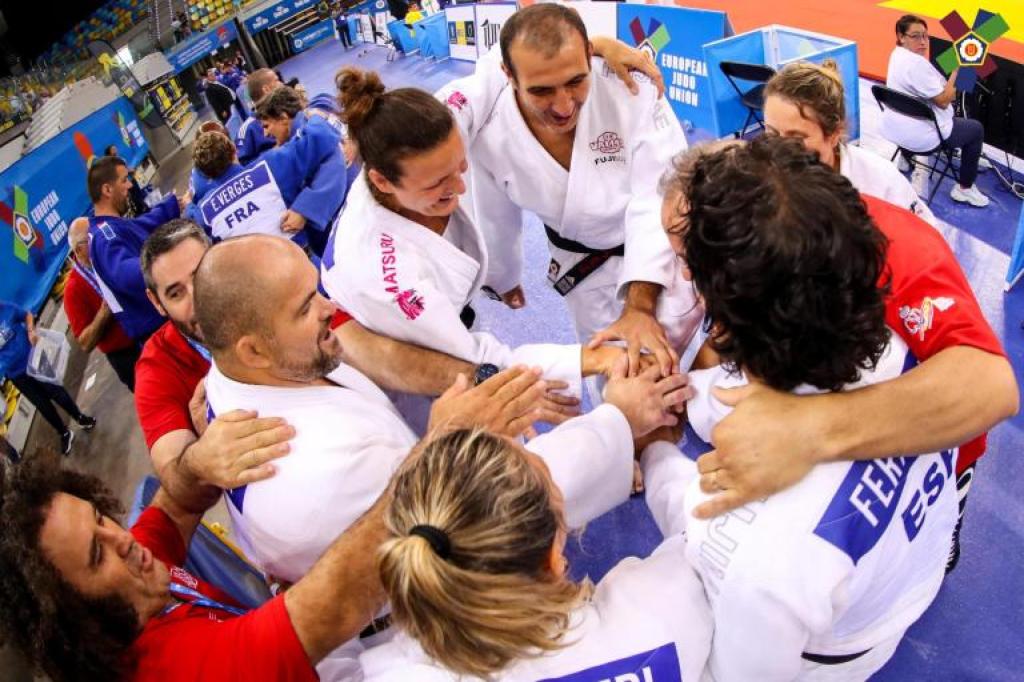 On the fourth and final day of the 2019 edition of Veteran European Judo Championships, players forming the 35 squads were reunited to fight the team event. For the first time in a major veteran competition, a mixed team contest for fighters from 40 to 49 years old was created and Spain won it.

There was an incredible atmosphere today at the Gran Canaria Arena Hall as the mixed Spanish team was crowned European Champion, in front of jubilant audience always encouraging and cheering during the strong matches.

Everybody was waiting for this interesting mixed team final between France and Spain. A high level battle with athletes like the 44 year-old multiple world cup winner Andreia CAVALLERI from Portugal, recruited by the Spanish team. The current Veteran European Champion in the -63kg category (F3) said:

I am very proud of the result today because Portugal had no team for this competition and when my friends proposed me to fight I was really happy. I used to fight at an another level but the veteran events are different, I am more relaxed, I have more fun. My team is like a family and today we had this motivation to win. We were united and strong.

The close match between the two nations ran through 6 fights before a final score of 3 victories for each team. Then came a stress-filled, long moment as all the judokas were waiting for the name of the hero who was to bring the golden point home.

The 2000 Olympian Beatriz MARTIN was faced with the task. Despite the stress of the previous contest, she earned an ippon easily after less than two minutes, leaving no chance for French judoka Sylvie LABAT.

Beatriz MARTIN is definitely a strong women. Less than two years ago she beat against cancer, she has since become Veteran European Champion in the -78kg yesterday and is the hero today as she gives the climatic win to Spain.

It was a big responsibility to be the one who had to carry the fate of a team for a nation. But the amazing crowd from Las Palmas gave me the power to push my limits. I am really proud to be part of this team, we know each other very well, we are family, I have been now living in Portugal for 13 years, so Andreia is like a sister for me and this is what made the difference.

Spanish fighters made their coach David SORIANO VALERO proud and confirmed that the preparation for the competition was efficient.

This team is really incredible. I am really proud of them. We prepared really strong for this day and here is the result of several weeks of hard training. The atmosphere in the group helped them to realize such crazy things. There was unity and what they did today is just amazing. Being the first veteran mixed team to be crowned European champion is such an honor.

The atmosphere of Gran Canaria had a really strong impact on the Spanish fighters’ motivation and the team of Alfonso CABRAL also bought gold home. Spain won two gold medals on the final day.

RUSSIAN DOMINATION FOR THE YOUNG GENERATION

The other big win of the day is awarded to the Russian team who easily became Veteran European Champion after dominating the strong Georgian Team in the semi-final. Three victories in a row and the Russian team jumped to the final. In the final match the French didn’t manage to find a solution despite the exceptional skills both technically and physically. Taking the title from Ukraine who were the Champions last year, Russia was crowned Veteran European Champion.

We have a really strong spirit, there is unity and a big solidarity between us. That‘s why we think that we were unstoppable today.

JUDO IS A FAMILY AFFAIR

Laurent and Estelle VERGES are both competitors from France, who did very well on the individual competition. Laurent became Veteran European Champion in the -73kg category (M3) while Estelle took bronze in the same age group in the -70kg category. They are married and took part together in the wonderful mixed team final against Spain. They both go back home with two medals.

We are really proud of what we achieved this week. The final against Spain was really close but a silver medal is also good result. There is a bit of disappointment too but we will do better next year.

Today four referees finished their career as European and Intercontinental referees. They were awarded with a plaque of appreciation by the EJU refereeing commission. We wish Sarah NADUIN LALAGUNA (ESP), Claudio RAIMONDI (ITA), MARYLISE CLÉMENT (SUI) and Merabi LOSEURASHVILI (GEO) good luck in their new activities.

Crete will welcome the veterans in 2020

We would like to congratulate all the athletes for their great performance and all the people who made this event possible and the region of Gran Canaria for providing such a beautiful and modern hall as the Gran Canaria Arena. See you next year!