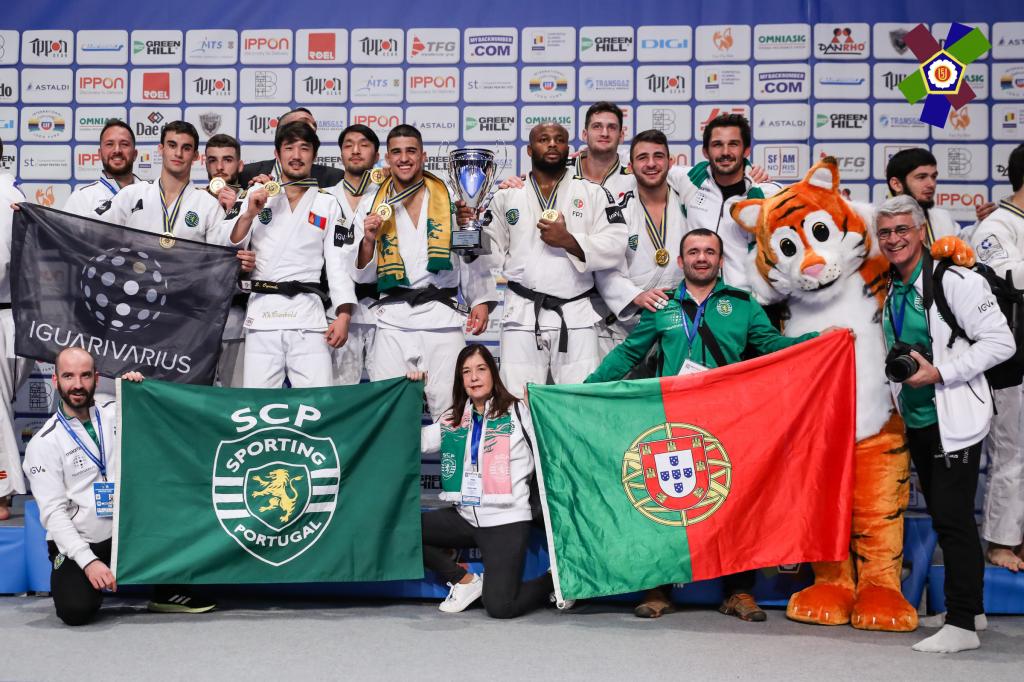 With a number of surprises on the first day of the European Club Championships 2018, the Champions League did not disappoint. The host nation fought through to the bronze medal contests in both the men’s and women’s categories alas did not make the podium. This unique tournament created a wonderful atmosphere, the spirit of the clubs as well the spectators made it an unforgettable event and the home crowd certainly hosted a fantastic day.


The top eight men’s clubs brought their A-game with an array of World Champions in their midst, and provided a constant stream of World class performances.

The men’s 2017 gold medallists, Yawara-Neva Saint Petersburg had a very successful day, once again storming through to the final against 2017 bronze medallists, Sporting Clube De Portugal, who also made it clear they were here for one thing only, the gold medal.

Their final round was against the 2017 Champions, Yawara-Neva Saint Petersburg, who have a string of titles in this tournament and came in confident as ever with a strong team.

David REIS in the -66kg category was first in the line up for the Portugese team and dominated his contest securing the first win and getting them off to a positive start. When asking if REIS felt any pressure as the first in his team against the previous Champions, he told us,

“I actually did not feel any pressure, I can’t explain the feeling I had, I knew I could do it, I love my team and would do anything for them. This was the first time I fought my opponent in competition, I had before in training maybe a couple of years ago, I knew his style and maybe he didnt remember me and I surprised him. The previous years we narrowly missed out in the semi finals so we knew that we could win this, it was just a matter of timing.”

Next up, GANBAATAR Odbayar took the second win, putting pressure on the opposing Russian team and threatening their competitive streak. Though Anri EGUTIDZE had been successful in his previous bouts,  a major component in his team reaching the final, he was unfortunate on this occasion and after evening the score, suceeded a second waza ari, making the score 2-1.

Next up was current World Champion, Nikoloz SHERAZADISHVILI, who eventually secured the Champions League title for Sporting Clube De Portugal, taking the pressure from the teams final athlete, Jorge FONSECA.

There was much to be celebrated as the Portugese team have taken bronze multiple times in the past and never quite made it to the top spot of the podium. Speaking to the coach, Pedro SOARES, he was delighted following the tournament,

“This is not just a gold medal to us, for the past four years we have taken the bronze, so for many years we have been chasing this title and it means a lot. We know that to win the gold we have to be here every year and I am very happy, for me it is like a dream, it is the most important title I have as a coach. I had a good feeling when I picked the teams, I changed it in the final and it was a lucky change, -66kg was a very good fight and to win the gold it must be perfect. This fight was actually the most difficult. It is a team job, even the men who did not do too well in the previous fights, performed better in the final. Next year we will be back for the same result.”

Unfortunately for Yawara-Neva Saint Petersburg, the women’s team failed to make it to a podium spot this year, losing out to Fiamme Gialle Rome in the first round and Judo Club Vinkovci in the repechage, the latter team ultimately taking a bronze.

The true starlets of the day came in the form of French club Flam91 Longjumeau-Massy. Coached by rececently retired athlete, Florent URANI, the team went from strength to strength, following their incredible golden result in the 2017 Europa League. URANI explained,

“I finished my competitive career last year, so this is a new adventure for me. I have a very very good club, girls and boys, tomorrow the boys will fight in the Europa League. Today was an amazing day, I was coaching an incredible team, from the first round I felt it would be perfect, also the chance to have our two Mongolian women was good for us, just incredible.”

The final was against fellow French team, Judo Club Pontault Combault, which did not have a successful start as they lost in the first contest. However it was quickly pulled back by LKHAGVATOGOO Enkhriilen with stylish technique in the second contest.

It looked to be a game of to and fro as Agata OZDOBA-BLACH took the second win for Judo Club Pontault Combault. The pressure was then on for World silver medallist, Marie Eve GAHIE to pull it back for Flam91 Longjumeau-Massy and even the score. It was a contest of strength between the young frenchwoman and Assmaa NIANG in the -70kg contest but fortunately, GAHIE was able to win the exchange, keeping her team in the running for gold.

Laura FUSEAU brought it home for Flam91 Longjumeau-Massy in the final women’s contest of the day, her team celebrating, holding both the Europa League gold from 2017 and now succeeding against the best clubs in Europe to take the Champions League title. URANI continued,

“It is of course good to win, after you win the Europa League you know can beat some teams and now in the Champions League, sometimes it can be difficult, maybe they do not have all the confidence but today my team were incredible and we are the Champions.”