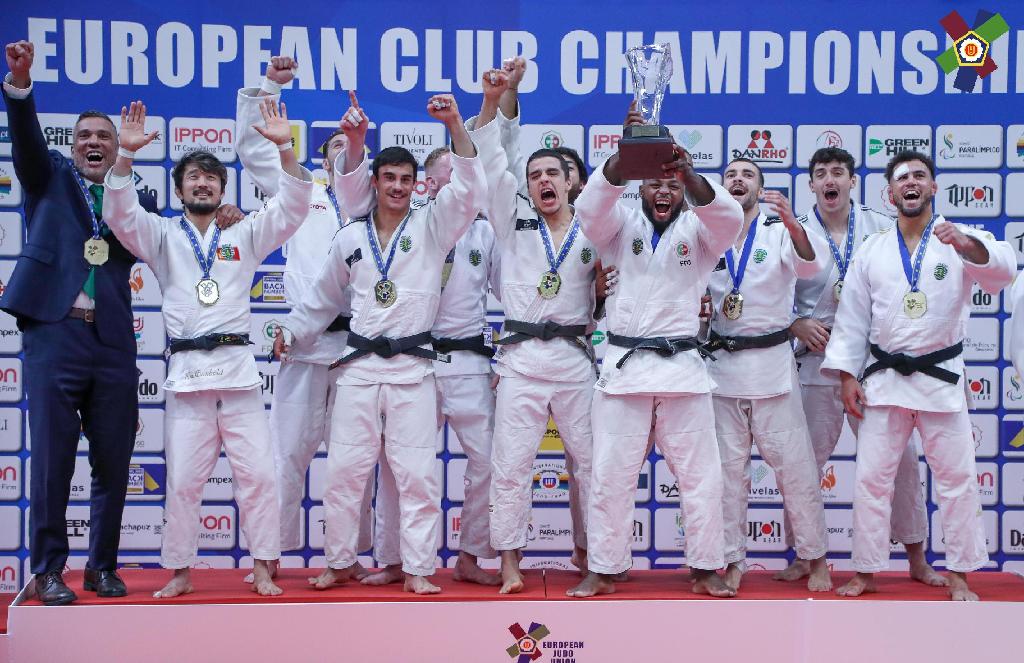 On day one of the European Club Championships here in Odivelas, Portugal, the men’s home team, Sporting Clube De Portugal came to defend their title in front of a roaring home crowd.

The 2018 Champions League gold medallists came up against the 2018 Europa League Champions, Golden Gori of Georgia in the first men’s quarter final of the day and were put under pressure immediately. Just 24 seconds in to golden score, GANBOLD Kherlan (MGL) managed to put a win on the board for Sporting Clube De Portugal against Vasha MARGVELASHVILI, however Joao FERNANDO wasn’t so lucky against Lasha SHAVDATUASHVILI, levelling the score.

Fortunately, the crowd carried the home team to a solid victory and a place against Russian team, Ratiborets Ekaterinburg in the semi final. It wasn’t the best start with a loss for Sporting in the first contest, but the comeback was incredible. Joao FERNANDO came back fighting after the quarter final and led the charge, his win inspired Frank DE WIT (NED) and Nikoloz SHERAZADISHVILI (ESP) to bring home the win, the spectators never wavering.

Given that this is the first time the current -100kg World Champion, Jorge FONSECA (POR) was under pressure following his extraordinary performance in Tokyo, he did not disappoint. The win was already in the hands of his team, but he made it a brilliant 4-1 result, solidifying their final position.

Their final was a repeat of the 2018 edition in Bucharest against Yawara-Neva Saint Petersburg (RUS). Suspense hung in the air as the teams walked out to face each other, and was felt by the arena as the first contest went in to golden score. With the crowd so desperate for a second title, GANBOLD managed to steal a win it in just over a minute. The following didn’t go in the way of the Portuguese but this just made the fans rally more. Yet another hard fought contest was to come for Joao MARTINHO who put another win on the board for Sporting, but the third and final win that sealed the gold medal came from the 2018 World Champion, SHERAZADISHVILI.

The celebration was very special, not only a second consecutive title at the Champions League but in front of a passionate home crowd was important for the team and coach, Pedro SOARES.

Following the medal ceremony, FONSECA took an interview with a national television station and presented a young girl, a member of the Judo4Help project, with his gold medal, sharing his victory with his home nation and a special cause.

The women’s 2018 Champions League success from France, Flam 91 followed suit with some incredible performances in the preliminary rounds. However the highlight on the quarter final rounds were SL Benfica Lisboa. A wave of red took up half the stands and erupted as the women’s Portuguese side SL Benfica Lisboa came out and managed an incredible 5-0 victory against Galatasaray Istanbul.

Portugal national treasures, Telma MONTEIRO, Barbara TIMO and Rochelle NUNES all contributed to SL Benfica Lisboa’s place in the semi final against VCJ Valencia (ESP) along with their international substitutes, Odette GUIFFRIDA (ITA) and Juul FRANSSEN (NED) and despite great efforts they were unable to qualify for the final.

Defeating the current champions were RSC Champigny (FRA) with World Champion, Clarisse AGBEGNENOU and World medallists, Amandine BUCHARD and Nekoda SMYTHE DAVIS (GBR). Climbing up through the ranks from 2018, the Europa League winners powered through the quarter final, only to meet up with the other French side. It was a tough battle but in the end, the Champigny women came out on top and in turn met the Spanish team from Valencia.

Only having to win three contests to take home the gold, the French battled to ensure their first three contests made that a certainty. The first two contests from BUCHARD and SMYTHE DAVIS ended by submission with AGBEGNENOU taking the final necessary win. The tight-knit team were beyond pleased with their results, attesting their success to their close friendship and work ethic – as well as their international addition of SMYTHE DAVIS.