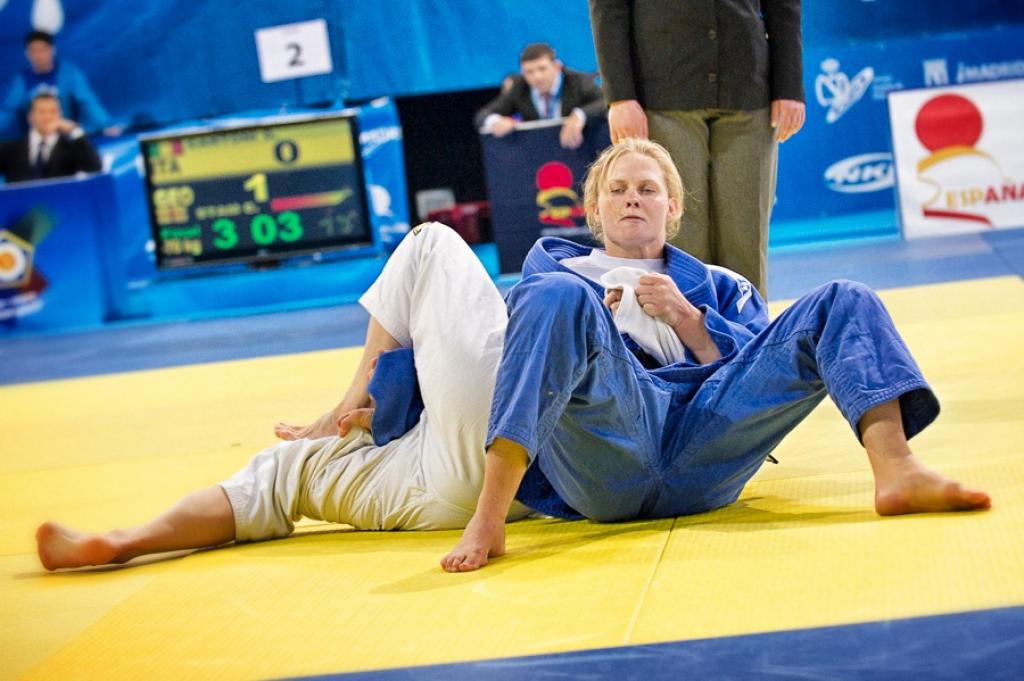 It was not an unusual sight to see Esther Stam step onto a medal podium; she had done so many times before. But what followed the presentation of her gold medal was the playing of the national anthem of Georgia her newly adopted country. „It was really special for me because I didn’t really expect to win“, said the Dutch-born judoka. Before the beginning of this Olympic qualification period she took the decision to compete for Georgia giving herself a strong chance of competing at the Olympics in Rio 2016. „Qualifying for the Netherlands would be extremely via these tournaments and Georgia has given me the chance to fight again. I am so happy that I could give something to Georgia with this title“, said the 27 years old woman.

At the European Open in Madrid Stam collected her first points for the World Ranking. 100 points was her reward for the victory in Spain. „Concerning the points, I don’t look too far away. I am just happy to be here. It’s just the best start I could have imagined.“

Ester Stam has been chosen as the EJU female player of day 2. Across 15 competitors in her weight class, she first won against the Spaniard Maria del Mar Paredes by Ippon. In the second round she defeated Jennifer Pitzanti from Italy. After that she went trough to the semi final by defeating the French Margaux Pinot. In the final, she faced another Italian on the tatami. It was Giulia Cantoni whom she then also overcame by Ippon.

EJU male player of day 2 was Toma Nikiforov from Belgium. He won all of his fights by Ippon in the under 100 kilo category whilst defeating two of his opponents who are ranked in the top 20 on the world ranking. „Today I felt very good. In the beginning I was a bit tired, but once on the mat I felt very good. Before the fights I spoke a lot with my coach, and we found out the best strategy“ – reviewed the 21 year old fighter.

The Beglium judoka had a ‚bye’ in the first round and following that he took advantage against Guram Tushishvili from Georgia. In the quarter-final he beat the experienced Egyptian Ramadan Darwish. In the semi-final Toma Nikiforov overcame the number one seed, Martin Pacek from Sweden. In the final he showed powerful judo again and defeated the Latvian Jevgenijs Borodavko.

Nikiforrov recalled the final: „He has good judo and I so do I. In the end I caught him by surprise. I am happy about that“ He added: „I always fight better against high level players and I hope that soon I will be seen as part of them.“

Although Toma Nikivorov colected 100 points for Gold, he tries only to focus on each contest first. “You have to think step by step and fight by fight. But these 100 points are a good start. Of course, Rio 2016 is in my head and it means a lot to me.“ – explained the Belgium judoka.

Another unusual situation witnessed by the audience today at the Caja Magica Stadium was the over-ruling of a decision in the quarter-final of the under 90 kg category. Alexander Roslyakov (RUS) faced Gary Hall (GBR). As the Russian player came in for a throw, Hall reaped on his opponent’s standing leg but the incident went unnoticed and Hall left the mat without any consequences. Roslyakov was trailing by two shidos so Hall was announced the winner the first time around. Following a claim from the Russian team, Hall’s action was considered to illegal and both fighters were called back to the mat where Hall was disqualified. Hall showed true sportsmanship in his attitude and sense of fair play accepted the situation. Halls’s coach, Jamie Johnson shared his view: „At first, we didn’t know why the decision was going to be been changed. But as soon as we sawnthe replay footage we agreed that it was absolutely clear and correct to go back and accept the Hansoku-make.“

Madrid welcomed a special guest, Alejandro Blanco, president of the National Olympic Committee of Spain. He shared his view: „It is a big honour for the Royal Spanish Judo Federation to host this event here in Madrid and I congratulate them on an excellent job. Hosting the first competition for this Olympic qualification period. Is a fantastic start!“

To watch the interviews with the two players of the day, click here: