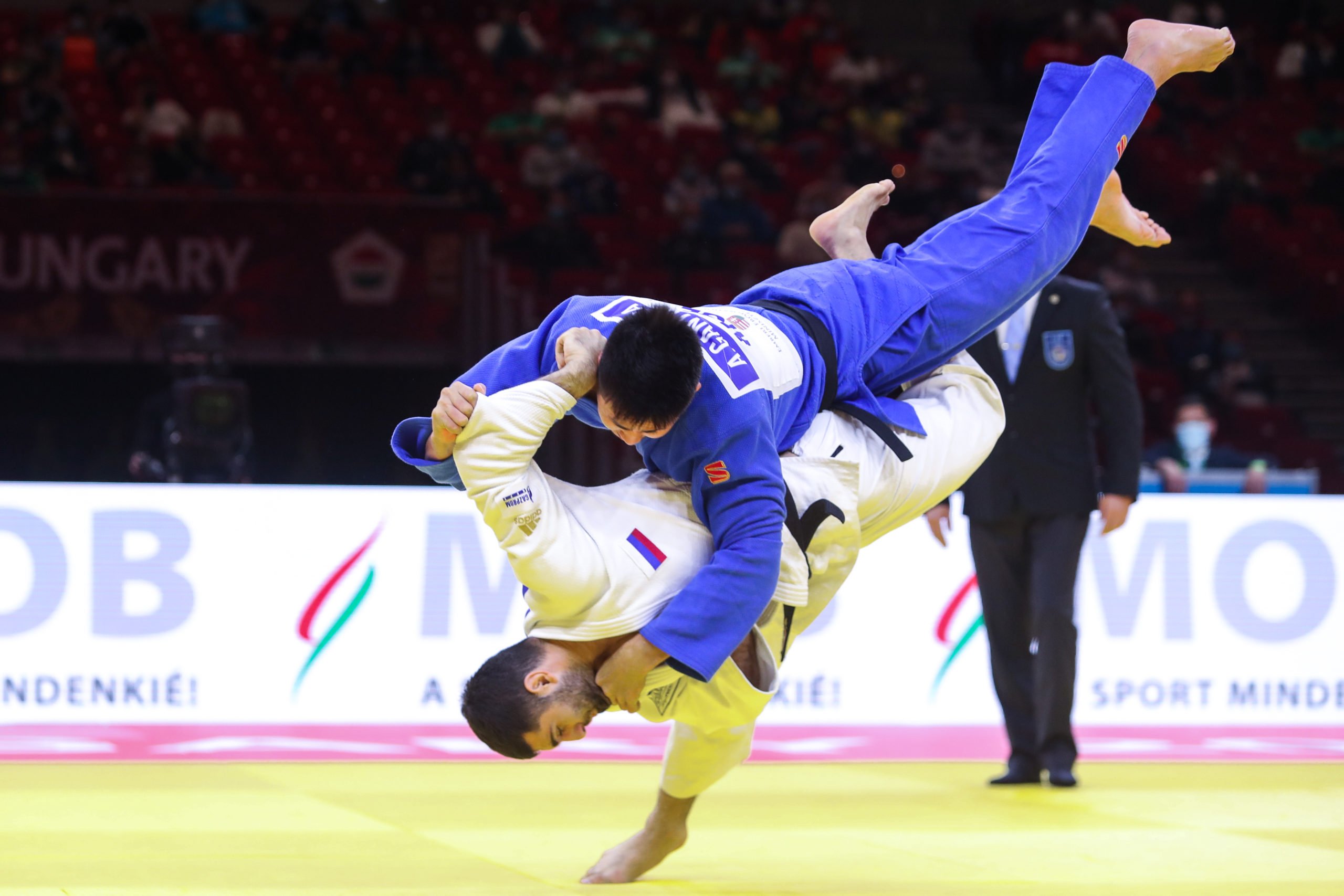 Kazan is a tale of two cities. As a result of its far inland position, summers can be extremely warm for its latitude and winters can be bitterly cold compared to areas further west in Europe. But over the coming days it won’t be the temperature but the results of the latest IJF Grand Slam that will be the focus of attention for those gathered in Tatarstan’s capital. There will be those for whom a good result in Kazan will secure qualification for the Olympic games in Tokyo. For others it will be the end of the road, the place where there hopes and dreams will come to an end. Such is the lot of the elite athlete, famine or feast. But before we cast doom on the occasion let us look forward to the battle.

The super-lightweight battle has more than simply the destination of the gold medal to hold our attention. There is still the matter of several internal match-ups. Laura MARTINEZ (ESP) will be looking for points as will Milica NIKOLIC (SRB) whilst their respective rivals are rested for Kazan. Continuing the head-to-head however will be Francesca MILANI (ITA) and Francesca GIORDA (ITA) both of whom are currently in qualification spots. Returning to the question of the gold medal, Tonaki FUNA (JPN) is the number one seed but will face strong opposition from Shirine BOUKLI (FRA).

In the -60kg category number one seed Robert MSHVIDOBADZE (RUS) may count himself fortunate in being drawn in the opposite half away from number two seed the exciting but unpredictable Sharafuddin LUTFILLAEV (UZB) against whom he has a 1-4 record. If things go the way of the seeding then it will be up to current world champion Lukhumi CHKHVIMIANI (GEO) to negotiate his way past Lutfillaev (the Georgian leads that particular head-to-head 3-1). Mshvidobadze has the numbers on Chkhvimiani whom he leads 4-0.

Japan’s 20-year old heroine, ABE Uta (JPN), is seeded number one and is yet to miss a final, winning 10 of 12 appearances in her senior career. Among the chasing pack in the -52kg category will be Charline VAN SNICK (BEL), Astride GNETO (FRA) and Ana PEREZ BOX (ESP). Outside of the seeded athletes only Andrea CHITU (ROM) has the pedigree to surprise.

Even with the absence of three time world silver medallist Mikhail PULIAEV (RUS) Russia will field a formidable quartet in the -66kg category. The four can boast a total of 14 Grand Slam medals between them and the likelihood is that Kazan will prove a happy hunting ground for them. They will take some stopping; perhaps Denis VIERU (MDA) or Tal FLICKER (ISR) may step up to keep Russia from taking top spot.

The position of number one seed can at times prove to be a poisoned chalice. It is vital for Timna NELSON LEVY (ISR) that she fight off any such superstitions and instead take advantage of her turn on the top spot. Ranked number 8 in the -57kg category on the WRL Nelson Levy should find her way to the podium and help to keep her among the top seeds when it comes to the draw for the Olympic games.

Despite being seeded number three in Kazan Martyna TRAJDOS (GER) is my pick for the gold medal in the -63kg category. The 32-year old German has vast experience, almost as much as Ketleyn QUADROS (BRA) who is seeded number four, and has winning records (or level) against all of the top eight seeds. Andreja LESKI (SLO) is the number one seed whilst Sanne VERMEER (NED) is seeded number two.

Fabio BASILE (ITA) can light up the -73kg category in a way that perhaps only ONO Shohei (JPN) can rival. Basile won’t have Ono to contend with in Kazan but the opposition will be strong enough to test the Italian who will be seeded number four. Ahead of him will be number one seed Tohar BUTBUL (ISR) whose last outing brought him a European silver medal in Lisbon last month. Khikmatillokh TURAEV (UZB) is the number two seed ahead of number three seed Tommy MACIAS (SWE). Russia’s hopes will rest with Denis IARTCEV (RUS) who is seeded number seven.

Double world champion ARAI Chizuru (JPN) is the number one seed in the -70kg category. Look for Maria PORTELA (BRA), after her gold medal winning performance in Tbilisi, and Asian champion Gulnoza MATNIYAZOVA (UZB) to provide the strongest opposition from outside Europe. Giovanna SCOCCIMARRO (GER) and team mate Miriam BUTKEREIT (GER) will be looking to sort out the position of German number one whilst Anna BERNHOLM (SWE) and Barbara MATIC (CRO) should feature in the final block. Outside of the seeded athletes look for Madina TAIMAZOVA (RUS), Alice BELLANDI (ITA) AND Ai TSUNODA-ROUSTANT (ESP).

If the -66kg category was strong for Russia then the -81kg category can only be described as super strong. Current Olympic champion Khasan KHALMURZAEV (RUS) is under tremendous pressure from team mates Alan KHUBETSOV (RUS) and Aslan LAPINAGOV (RUS) both of whom are ahead of him on the WRL. Topping the seeding is current world champion Sagi MUKI (ISR). But it is those athletes outside of the top eight seeds who may yet come to steal the show. In a field containing 39 judoka there will be upsets.

Nemanja MAJDOV (SRB) gets an opportunity to start as number one seed in the -90kg category, one of the largest (43 athletes). Majdov lost out in the bronze medal contest of the European championships against Mikhail IGOLNIKOV (RUS) who is seeded number two. Marcus NYMAN (SWE) will be in Kazan after back-to-back Grand Slam gold medals in Tbilisi and Antalya. Eduard TRIPPEL (GER) and Axel CLERGET (FRA) could both do with achieving podium finishes.

In the -78kg category Anna Maria WAGNER (GER) and Luise MALZAHN (GER) take the top two spots followed by the two Russians Antonina SHMELEVA (RUS) and Aleksandra BABINTSEVA (RUS). Tbilisi Grand Slam gold medal winner Natascha AUSMA (NED) and Inbar LANIR (ISR) are two to watch. Having promised so much early in her career, Anastasiya TURCHYN (UKR) is in danger of failing to qualify for the Tokyo games. The 26-year old needs a good result here if she is to be part of the ultimate sporting experience.

Number one seed in the -100kg category Peter PALTCHIK (ISR) will be looking to bounce back after an early exit in the European championships last month. Paltchik has a 2-1 record against home favourite Arman ADAMIAN (RUS) who is seeded number three behind former world champion CHO Guham (KOR). Outside of the top seeds look for Onise SANEBLIDZE (GEO) and Niiaz BILALOV (RUS) and, if you really want an outside bet then look no further than Simeon CATHARINA (NED).

Making her final preparations for Tokyo is current IJF Masters champion at +78kg Romane DICKO (FRA). One would be hard pressed to find someone who would back anyone against her at present. Her last five outings have brought her a Grand Prix, two Grand Slams, a European title and the world Masters title. Nevertheless, it is Maria Suelen ALTHEMAN (BRA) alongside team mate Beatriz SOUZA (BRA) who take the top two seeded positions. Outside of the seeded athletes Milica ZABIC (SRB) can still grab a spot if the draw is kind and if she avoids one of the “big guns” in the opening round.

Having defeated on his way to the gold medal at the Antalya Grand Slam both Lukas KRPALEK (CZE) and HARASAWA Hisayoshi (JPN), home favourite Tamerlan BASHAEV (RUS) will start as number one seed. Who knows what the procedure for selection of the Russian team for Tokyo will be? However, they appear to have a huge headache when it comes to the +100kg category where Inal TASOEV (RUS) is current European champion. Roy MEYER (NED) will as usual provide the entertainment whilst the boys from Brazil will be the opposition for the Europeans.