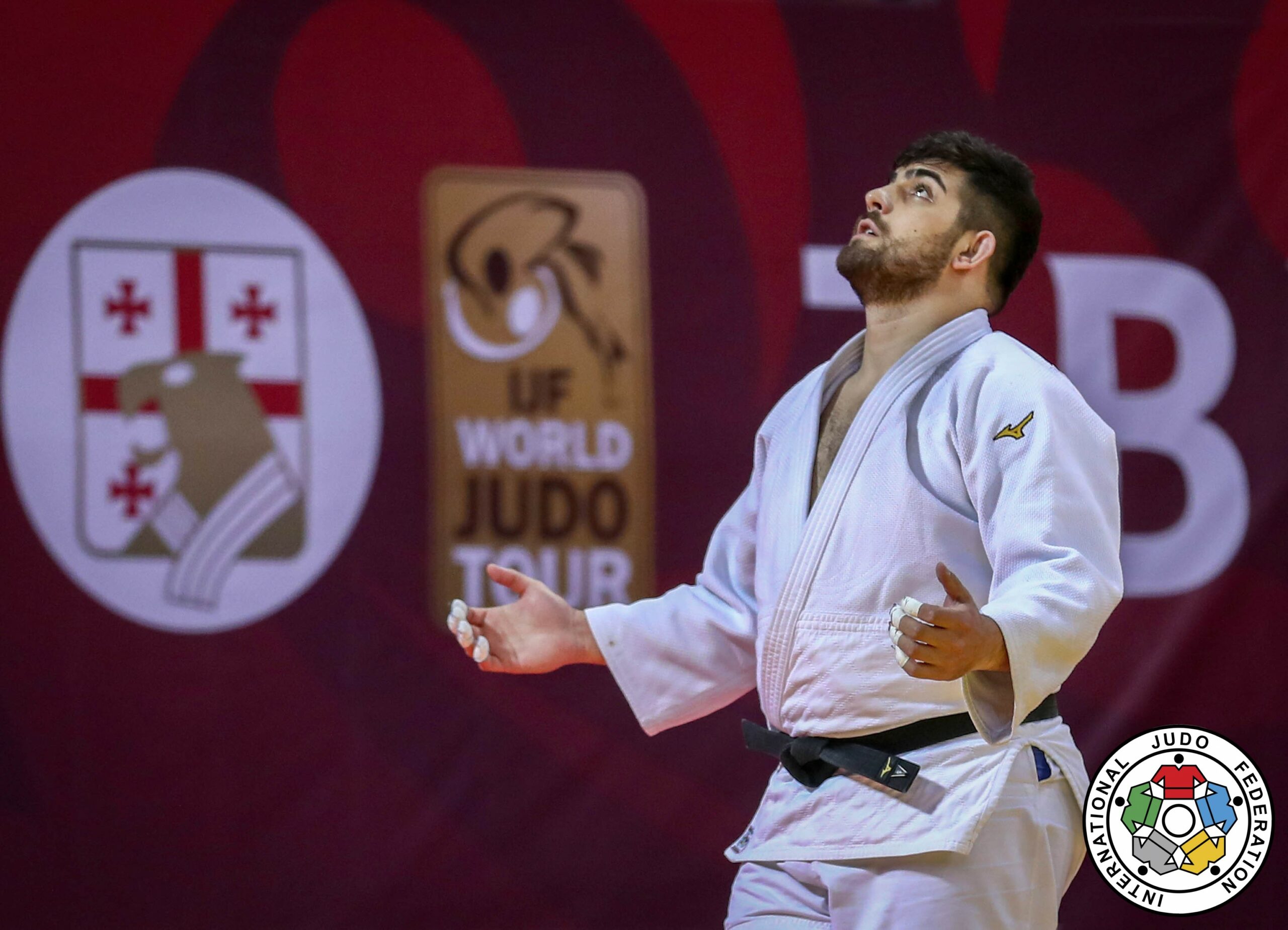 And so, it came to the “showdown”. The final of the +100kg category, so often over the years the focus of home-crowd attention as whomsoever the Georgians had prepared for the task set about ending their event on a high note. This time the role of Georgian hero fell to double Grand Slam gold medal winner Gela ZAALISHVILI (GEO). In keeping with the draw, number two seed Zaalishvili moved smoothly to the final to face number one seed Rafael SILVA (BRA). The stage was set for a truly David and Goliath meeting with the 21-year old Georgian up against the man mountain Silva who has won as many Tour medals as Zaalashvili has had birthdays. But Silva’s past exploits were insufficient to keep Zaalishvili from his goal and, despite being dragged into golden score, Zaalishvili stayed the course, eventually throwing Silva for ippon with a perfectly executed o soto gari and the gold medal. Saba INANEISHVILI (GEO) announced his arrival on the senior scene by taking the first of the bronze medals when he defeated Cemal ERDOGAN (TUR). The second of the bronze medals went to Andy GRANDA (CUB) but not before Maciej SARNACKI (POL) gave the Cuban a bit of a shock, catching him with ko soto gake for waza ari. The Cuban came back however with two scores to take the bronze medal.

In one of the largest categories (44 athletes) the -90kg category provided the opportunity for Marcus NYMAN (SWE) to once again demonstrate his expertise in newaza as he clinically dismantled his opponents including in the final Nicholas MUNGAI (ITA). Number four seed Nyman went about his craft with flawless precision as he picked up his third Grand Slam gold medal. Davlat BOBONOV (UZB) began the day as number one seed but after losing his quarter final to Mungai, came back in the first of the bronze medal contests to defeat Li KOCHMAN (ISR) with a crunching ura nage. The second of the bronze medals went to Mongolia when Shermukhammad JANDREEV (UZB) was thrown with a beautifully timed uchi mata for ippon by GANTULGA Altanbagana (MGL).

The Dutch pairing of Natascha AUSMA (NED) and Karen STEVENSON (NED) fought it out in the final of the -78kg and it was Ausma who took the gold after cleverly applying a shime waza. Inbar LANIR (ISR) continues to improve and was delighted to pick up her second Grand Slam bronze medal. In the very first attack of the medal match she buried Bernadette GRAF (AUT) with a powerful ura nage for ippon. MA Zhenzhao (CHN) overcame Aleksandra BABINTSEVA (RUS) in the second of the bronze medal matches when in golden score the Russian appeared to tire and lost out in a desperate ko soto gake battle.

In the -100kg category Current world champion Jorge FONSECA (POR) had the luck of not one bye but two and found himself in round three without having had to step onto the tatami. However, when he did get his chance to take centre stage he found an irrepressible Ilia SULAMANIDZE (GEO) waiting for him. In an action packed 40 seconds Fonseca scored first with seoi nage before the Georgian came back with his own two scores (ko uchi gari and o soto gari) to condemn Fonseca to yet another early exit. Even Tashkent Grand Slam gold medal winner Toma NIKIFOROV (BEL) could not halt Sulamanidze as the Georgian powered his way into the final throwing the Belgian twice. In the final Sulamanidze (GEO) was unable to hold off the throwing skills of Shady ELNAHAS (CAN) who caught the Georgian with a sharp seoi nage, ko chi gake combination for waza ari. Sulamanidze was unable to pull the score back and Elnahas, sporting a shock of bleached blonde hair, pumped the air in celebration at taking his first ever Grand Slam gold medal. The first of the bronze medals was won by Muzaffarbek TUROBOYEV (UZB) when in golden score he threw Niiaz BILALOV (RUS) with makikomi. The second of the bronze medals was won by Toma Nikiforov (BEL) when with a single score (ura nage) he defeated a spirited Joakim DVARBY (SWE).

In the +78kg category it was XU Shiyan (CHN) who in the final threw Rochelle NUNES (POR) with uchi mata for waza ari to take the gold medal marking a return to the super-heavyweight medal table for China. In the first of the bronze medal contests Raz HERSHKO (ISR) found it tough going against 22-year old Beatriz SOUZA (BRA). The Brazilian proved too strong for Hershko who eventually fell to a powerful o soto gari.  Team mate Maria Sue Ellen ALTHEMAN (BRA) followed Souza to take a bronze medal when she defeated WANG Yan (CHN) in a match that produced five shidos, Wang being the more guilty of the pair.