Strong and new medallists at European Championships for Cadets 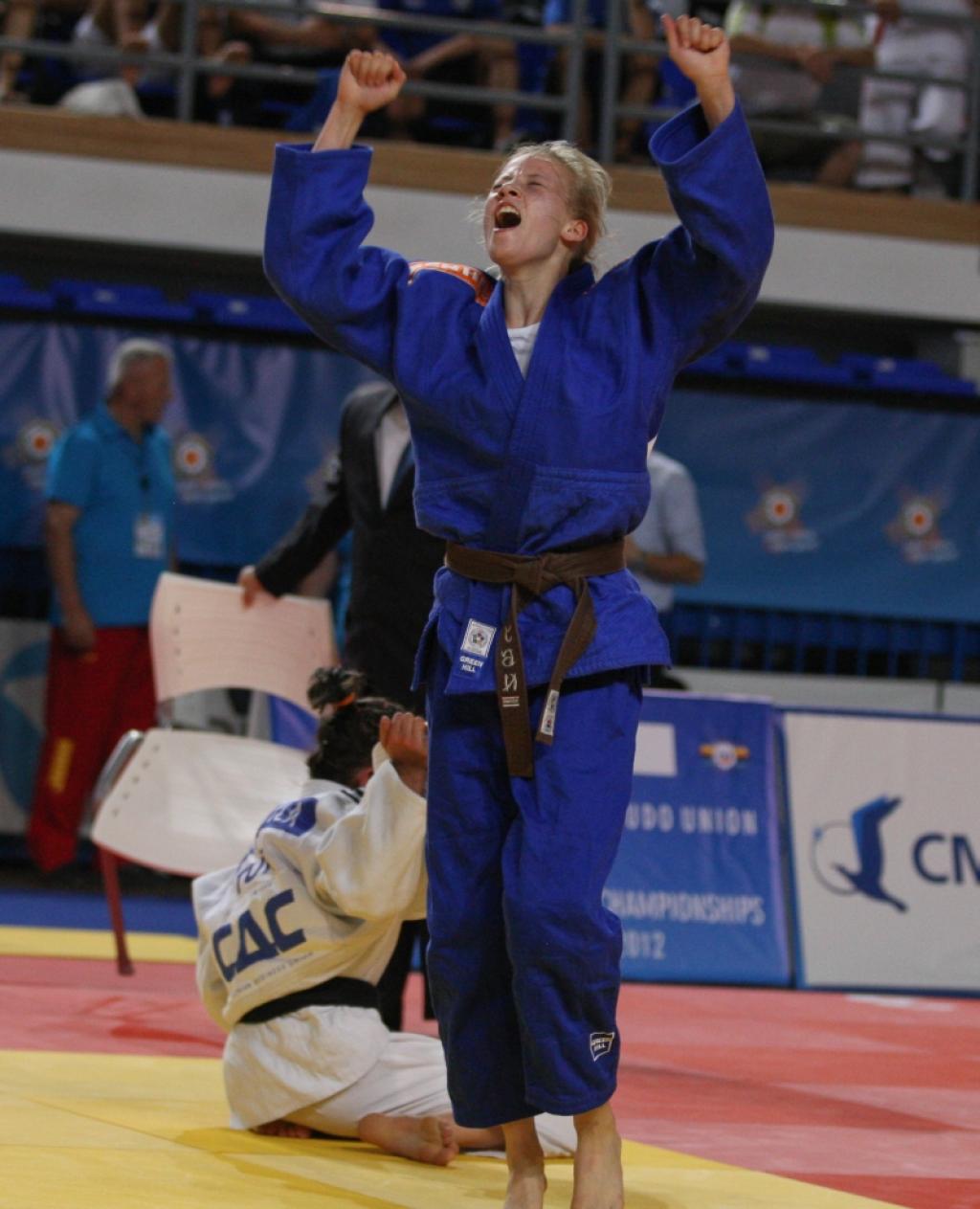 The first gold medal of the day was for The Netherlands. In the category U40kg Amber Gersjes took the victory defeating Rabia Sanyayla of Turkey. In a field of 16 participants the Dutch celebrated her victory in front of her mother watching her three wins of today.

Gersjes who won the European Cup in Bielska Biala (POL) faced the Turkish opponent who won two European Cups this year in a series of ten she won in Kiev and Tver.

Gersjes was also surprised and very happy with the result, a great birthday gift for her 15th anniversary tomorrow. She celebrates the 13th European title for Holland in this age category, 11 won by the women and she succeeds Do Velema who won gold for The Netherlands last year in Cottonera (Malta). Gersjes was the youngest winner of Friday.
Watch the interview here:

Camelia Ionita of Romania (the youngest medallist) won the bronze medal U40kg when she overcame Daria Gariushenko (UKR). Tsvetelina Tsvetanova of Bulgaria won bronze too. For all medalists it was their first ever European medal.

Men U50kg
The first gold medal in the men’s category was for Georgia. Erekle Arkhozashvili had a tough opponent in the final with german Moritz Plafky. But Arkhozashvili dominated the exciting match and opened the score. Plafky was very concentrated but gave a little space because of his offensive style. The Georgian scored a Ippon but was awarded a waza-ari afterwards. Very dangerous to the dedicated German who was supported by his teammates and fans on the stands the whole day.
Plafly did come back with a waza-ari and it was equal again. Nonetheless Arkhozashvili stayed cool as well and scored another waza-ari finishing the final by Ippon. “It was tough to keep the concentration after he thought he had won” Arkhozashvili said to EJU TV. Plafky was happy with a silver medal and finally gave his fans the attention back.

Elnur Abbasov (AZE) and Sadig Gurbanov both won a bronze medal on behalf of Azerbaijan. Last year Azerbaijan won five medals at the whole tournament. Today Ilkin Babazada added a gold medal U55kg. The 18th in history and there was a famous one who later won the Olympic title; Elnur Mammadli who won this championship in 2004.

Men U55kg
Babazada won his final U55kg against Beka Natatraslashvili of Georgia. He was the best of 41 participant winning five matches in a row. Typical as he hadn’t won any tournament this year although he warmed up well at the European Cups of Kiev, Teplice and Bielska Biala where he won medals.

Natatralashvili won this year in Antalya but couldn’t take the gold today. His compatriot Katasiashvili was on the stand as well with a bronze medal. Harutyan Dermishyan from Armenia won a gold medal as well, They are all from the same region which is very strong in this age category where psysical aspects do matter, besides technique.

Women U44kg
Germany has a typical fighting spirit when it comes to medal fights at real Championships such as these. Soraya Bernstein proved that you don’t have to be the best during the season and peak at the right time to win a gold medal. Bernstein won a silver medal in Berlin in May where she lost against a Japanese opponent. On Friday she was the best U44kg defeating Noelle GrandJean who was mentioned to be the favourite in advance in this strong category. Grandjean may have spent her energy in her previous fights against Shilova (RUS) and Reka Pupp (HUN) who won a bronze afterall. But Bernstein fought her well: “I hadn’t fought her before. She was very strong today” according a respectful Bernstein. She didn’t know what to say after winning her gold medal and was surprised as well by her great performances.

Kristina Shilova of Russia won a bronze medal in her match against Anastasia Turcheva (RUS) who was also quite successful in the pre-season.Shilova however won in Antalya and Tver and was again good today but lost against Grandjean in the semi final.

Women U48kg
In the fight for gold U48kg, Marine Baumans of Belgium and Betina Temelkova made it an exciting match ending in the golden score. Baumans who was in a good shape given her gold medal in May in Bielska Biala couldn’t get a hold on the cool Bulgarian in the last minute of the golden score and was penalized for passivity. A good continuation for Bulgaria stepping into the lights of Borislava Damyanova who won gold last year U40kg.

The bronze medal in this division was for Anja Stangar of Slovenia, who won bronze last year as well. Adele Ravagnani of Italy was ranked third today, a good position for the number five of the U17 World Championships. She was happy with the result and thanked her teammates on the stand for the support. The first medal for Italy today.

Men U60kg
In the weight category U60kg Georgia won the gold medal. He defeated Dzmitry Minkou of Belarus in the final, but with a little help of Minkou himself. Minkou led comfortable with waza-ari and yuko but 30 seconds before the match ended he was penalised for swipping the leg from behind and gave the match away.

Ilkin Mammedov captured another bronze medal for Azerbaijan in his match against marko Grandic (SRB). Manuchekhr Kodiri (RUS) won the fight for bronze against his compatriot Samvel Chakra.