Strong judo in the men's light divisions by European Cadets 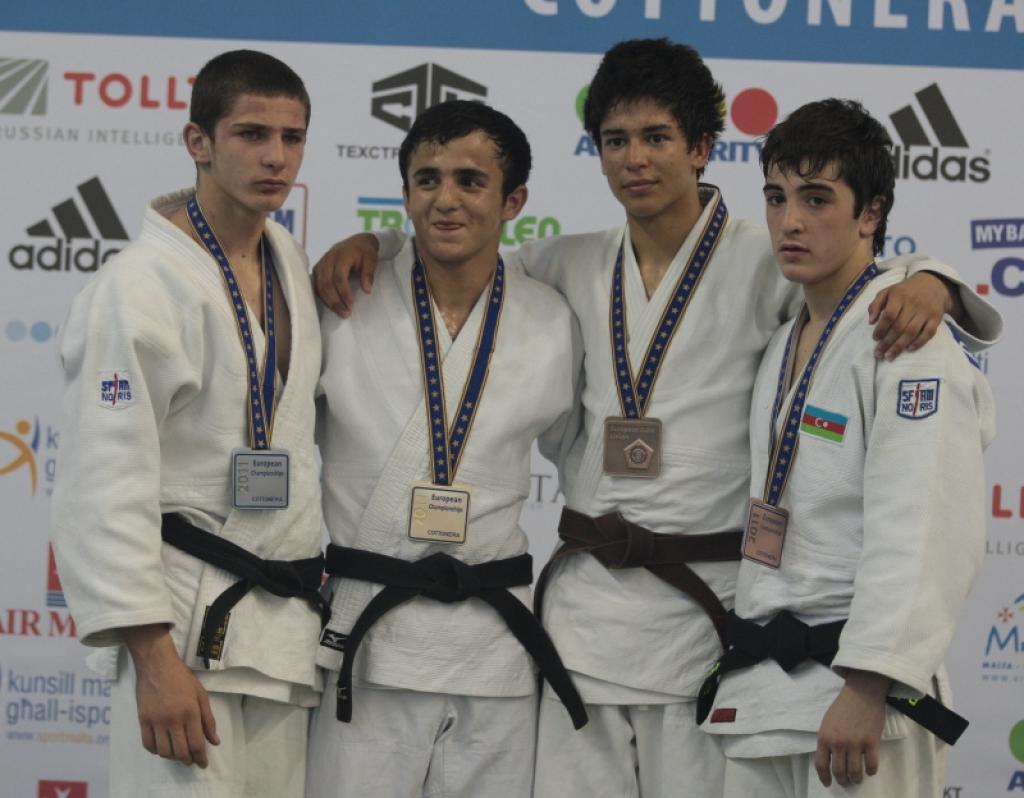 Great judo today in the young men’s divisions at the European Cadet Championships in Cottonera in Malta where Italy, Georgia and Russia won gold. Italy started well this afternoon by taking two medals in the light weight category U50kg. Elios Manzi of Italy won the title with cool judo. Manzi was amazingly strong today and defeated four competitors impressively with strong judo but stayed focussed until the last moment.
In the final he started powerful again against Walide Khyar who had the same intention to make a hell a fight. For the first time today Manzi was seriously chased by the 15-year old French judoka. The taller Frenchman was fanatically supported by his teammates. Halfway the match Manzi seemed to get grip Khyar who hadn’t scored despite his storming start.
Manzi who had won two European Cups in his age category finished third at the Italian Championships behind winner Cavallo who won bronze today. After a break for a bleeding nose of Manzi the match restarted with the same spirit to win and Manzi scored yuko immediately by throwing Khyar with a creative seoi nage with one hand and took the lead for the first time in the match and hold it for the last seconds. Khyar dominated but Manzi used his power more efficiently.
Bronze was for French Louis Masy who defeated Sadig Maharramov of Azerbaijan. Maharramov had lost his semi final against Khyar of France and didn’t want to lose a second time against a French fighter. Masy was however stronger in standing position as well as ne-waza. Masy scored waza-ari in the last minute and took care of two French medals in this category.
Italian Luca Cavallo won a bronze medal in his fight against semi finalist Marton Takacs (HUN) by penalties, but in the last second Takacs scored as well. In the golden score it was Cavallo who decided the match in his advantage.

Georgia takes title U55kg
Again not the favourites won the European title but in the category U55kg new kids on the block showed their performances. Vano Mamisashvili is national champion in Georgia.
Iskandar Talishinskiy and Vano Mamisashvili fought a more tactical fight. No running around or impulsive actions, but a deliberate timing for the right moment. That moment followed after the golden score when the referees gave an unanimous decision for a gold medal for Georgia.
Mamisashvili was very close earlier in the fight twice when he swiped away the legs of Talishinskiy but not enough for a score. One minute before the end the stronger Georgian judoka was almost able to make the decision in the match by a choke, but Talishinskiy escaped and could hold it until the end of the fight. Nobody complained when Mamisashvili was awarded the gold by decision.
In 2010 Rashad Guliyev won gold in this category, but this time the title goes to the neighbours.
Albrus Zamanov (AZE) won a bronze medal when he scored two waza-ari in his match against number one seeded Pavlo Skopnenko (UKR). The Ukrainian started well today with three victories but lost his last two bouts. Zamanov came back in the repechage after his defeat against Mamisashvili.
The other bronze was for The Ukraine. Oleksandr Yemchenko (UKR) was able to beat Patryk Wawrzyczek of Poland. Yemchenko had also lost his semi final against Mamisachvili but in the golden score Wawrzyczek was penalised after a long fight. Yemchenko takes the bronze to the Ukraine.

Gazimagomedov wins European title in magical category
Russian Eldar Gazimagomedov was the strongest judoka in his category this year. Today he confirmed his status as number one seed. Gazimagomedov took the initiative in the match and almost scored after one minute.
Gazimagomedov had won European Cups in Zagreb, Tver and Berlin this year while Tamaz Kirakozashvili had won the events in Kiev and Antalya. Both reputations resulted in a great fight. First with a stronger Gazimagomedov who scored a yuko halfway the match, but the tough Kirakozashvili fought back and had some chances to score as well. With his lead Gazimagomedov could tactically fight his match to an end and take the European title. Kirakozashvili gave could opposition but the Russian got the applause of his teammates and became the successor of compatriot Yunus-Khadzhi Khutiev who took the title last year.
Two tall guys in the bronze medal fight between Russia’s Vladislav Azovtsev and Deividas Tarulis of Lithuania. Azovtsev showed some awesome judo today but was completely surprised by ippon of Rashad Rufullayev (AZE) in their quarter final. Azovtsev could come back via the repechage against Wilhelm Cherel and for bronze he was the more offensive fighter against Tarulis. He was awarded three yuko and scored two waza-ari in no time and finished the match like he showed previously against Pawel Borowicz and Sergiy Nivitskyy. He made one mistake but won the bronze in the end.
Another great bronze medal fight was between Rashad Rufullayev and Alexander Raskopine of Israel who also had a great day but was defeated in his quarter final against the amazing Gazimagomedov. Both stylists scored a waza-ari in ther four minutes but were equal. In the golden score Rufullayev rolled Raskopine on his back for a decisive yuko. Both fighters could have won bronze, but there’s only place for four judoka in the medal stage. This category was today’s highest quality division with great fights, good ippons and young professionals that we will see back in the U20 division.

Find all results and photos at this start page: