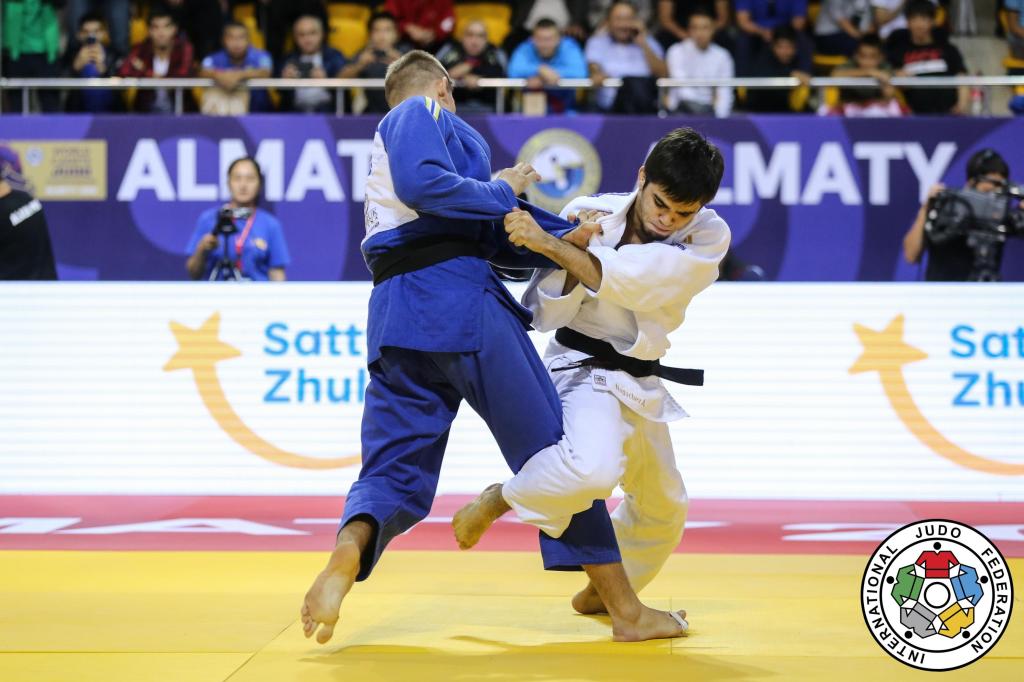 The second day of the Cadet World Championships being staged in Almaty, Kazakhstan saw Abrek NAGUCHEV (RUS) take the gold medal in the -66kg category. Having won a bronze medal two years ago, Naguchev was able to emulate his brother who himself had taken the gold medal in the lighter -60kg weight category in 2017. Naguchev was indisputably the class act on display and was well received by an appreciative home crowd despite loyalties to their own favourite, Tilegen TYNARBAY (KAZ), who eventually had to settle for a bronze medal.

Seeded number one, Naguchev received a first-round bye before beginning his day in earnest with a relatively straightforward win against Davit ABRAHAMYAN (ARM). A sode tsuri komi goshi that scored waza ari followed by a ten second osaekomi was not sufficient to really test Naguchev. But he moved in to round three where Dato DVALISHVILI (GEO) was likely to provide a stiffer test. The young Georgian did indeed come out with an attacking attitude. Naguchev however, met him head on, throwing Dvalishvili with a huge ura nage for waza ari before holding the Georgian with kuzure kata gatame to end the contest. In the quarter final Naguchev faced Asia-Oceania bronze medallist Bishal Singh KONTHOUJAM Bishal Singh (IND). Naguchev was quick to open up with an uchi mata effort that scored waza ari. The Russian closed out the contest once again using his favourite turn over into kuzure kata gatame. In the semi final Naguchev faced Pan-American silver medallist Mattheus PEREIRA (BRA) whose exciting throwing skills promised to make for an intriguing contest. But Pereira’s open, attacking posture suited Naguchev and he closed in from the first gripping exchange to launch a huge ura nage that threw Pereira for ippon within the first 30 seconds.

In the final Naguchev began strongly and quickly against the unseeded Rostyslavat BEREZHNYI (UKR). He turned Berezhnyi over and into his favourite kuzure kata gatame, only to see the Ukrainian escape without giving up a score. Shortly thereafter Naguchev came up with a sode tsuri komi goshi that scored waza ari and things looked as though they would follow the pattern of earlier contests. Yet once Berezhnyi had weathered the initial storm, Naguchev became surprisingly cautious perhaps given the success of Berezhnyi earlier during the day. Whatever the case, Naguchev struggled to find the sparkle that had seen him stroll to the final. It was a tired and relieved Naguchev that went the distance, so much so that the young Russian lay on the tatami for some seconds before getting to his to acknowledge the applause of the audience and to bow to the spirited but defeated Berezhnyi.