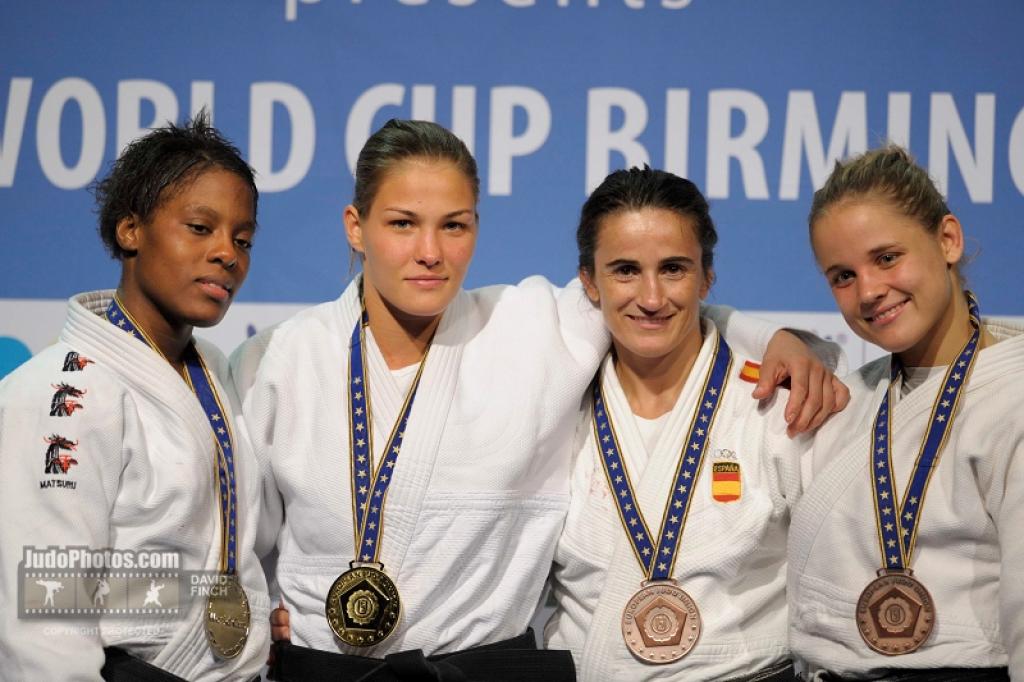 Day one of the 2010 GB World Cup saw Belgium top the medal table after taking one gold and one bronze. A marvelous distribution of all medals as twelve nations won the 16 available medals at the first day of the British Open for women.

As 22 nations fielded a total of 98 competitors, across four weight categories, it was the Belgian’s who made a mark in Birmingham.

After a blistering demonstration of the British Judo Association’s new fitness class, Judo Fit, the highly-anticipated action on the mat began.

Belgium, who travelled with a five-strong team, took top honours in the under 48kg division as Charline Van Snick defeated Brazilian Taciana Lima and picked up a bronze via Julie Baeyens who toppled China’s Yang Liu.

The remaining gold medals went to Hungary, Luxembourg and Slovenia while France and Brazil both claimed a silver and bronze medal.

Three British fighters remained in action after the pool stages, as Sophie Cox, Gemma Howell and Faith Pitman were spurred on by a vocal home crowd.

Sophie Cox defeated Slovenia’s Petra Nareks in her opening fight before dispatching Belgian Hanne Van Bossele in the second round. The 2005 European Championships runner-up overcome Russian Anna Grebennikova in the quarter-final to book a semi-final meeting against Jaana Sundberg of Finland.

Bacup Judo Club star Cox lost out by ippon which saw her enter the repechage against German Jacqueline Lisson. The Manchester judoka wore down her opponent as she tirelessly attacked and forced a yuko score to claim the bronze medal.

“It was a very strong competition, but that is what I want,” Cox said after stepping off the medal rostrum.

“I am on the comeback trail, and have only been working back on the mat for around three months, so I am still finding my way and this was great experience.

“It is a personal challenge and it feels like I have unfinished business, because I feel I have the potential to do a lot more within judo.”

In the U57kg category Hedvig Karakas won her third World Cup in her career. In the final she defeated French Sarah Loko. Remarkable bronze was captured by 38-year old Isabel Fernandez from Spain who retired after the Beijing Olympic Games but recently made her international comeback and today succesfully defeated three opponents. Fernandez won her 47th World Cup medal!

Dartford star Gemma Howell defeated Finland’s Satu Lehikoinen and Germany’s Miriam Garmatter before losing a nail-biting quarter-final against French judoka Sarah Loko. The defeat saw Howell, who finished seventh in her maiden appearance at the World Championships last month, revert to the repechage where she lost out to China’s Yang Liu.

Slovenian Urska Zolnir took the gold in the U63kg division. Zolnir beat Yarden Gerbi from Israel in the final. Zolnir won her 11th World Cup.
After a bye in the first round Faith Pitman defeated Portugal’s Ana Cachola. The Brit put narrowly lost out to Slovenia’s Urska Zolnir and reverted to the repechage where she defeated China’s Meiling Lin. That victory saw her compete in the bronze medal match against Esther Stam of Netherland. Pitman looked strong as the first started but fell to an ippon half way through the contest.