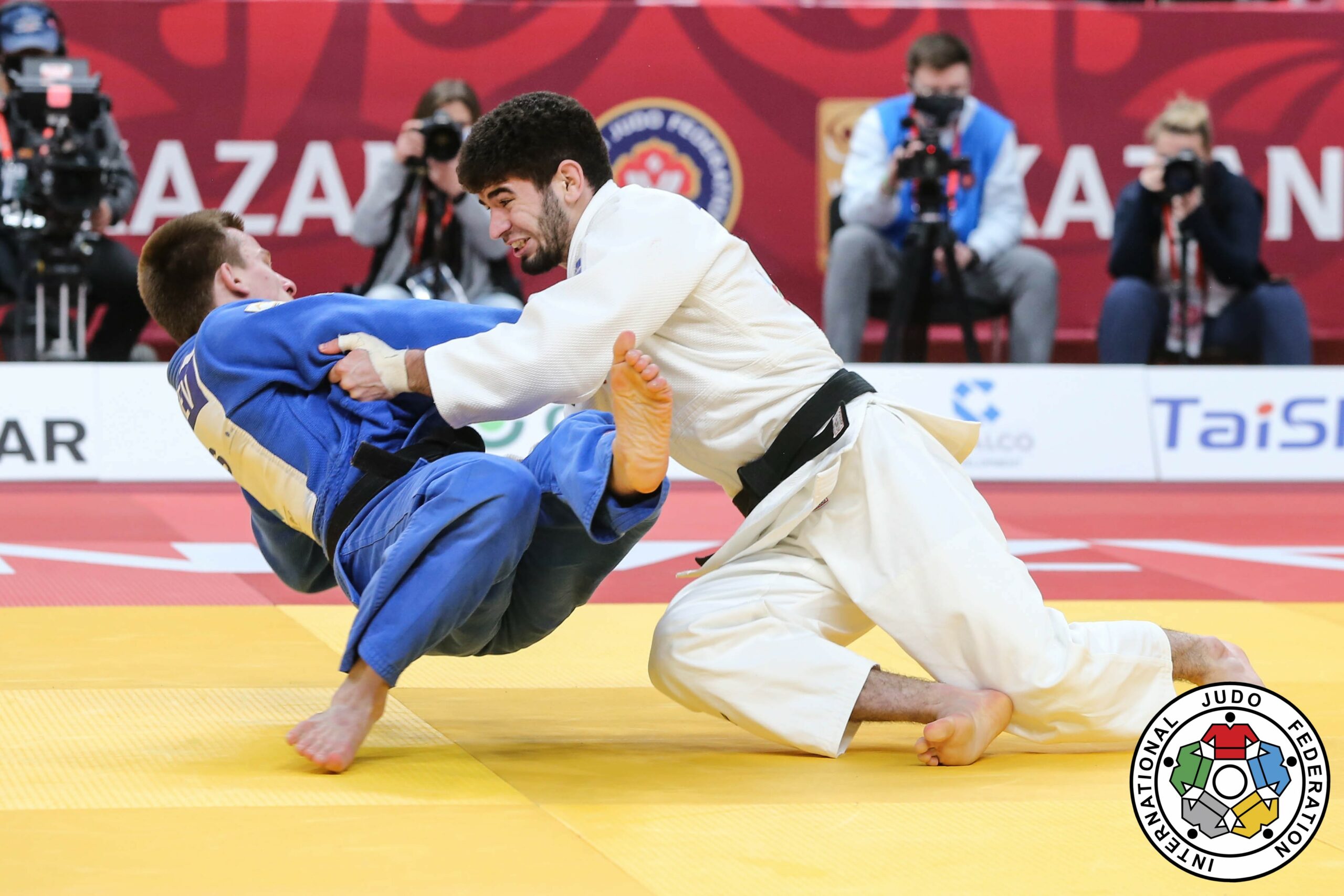 Russia’s hopes in the -73kg category could reasonably have been expected to rest with Denis IARTCEV (RUS). But Iartcev bowed out early and as the top seeds tumbled, we were eventually left with what must surely rate as the most surprising of Grand Slam finals ever when Ayub KHAZAHLIEV (RUS) faced Makhmadbek MAKHMADBEKOV (RUS) in an all-Russian final. Prior to the surprise final, number three seed and current Olympic champion at -66kg Fabio BASILE (ITA) had made a disappointing early exit when he lost his opening contest to Nurlan OSMANOV (AZE). The Azeri was unable to follow up this success, losing in the next round to  Nugzari TATLASHVILI (GEO) who in turn lost his semi-final to Khazahliev. The final was one of the best Russian head-to-head match ups that I can remember, both athletes giving their all. However it was Makhmadbekov who in golden score came up with an ura nage to take the gold medal for Russia. Despite both athletes being ranked outside the top 100 there can be no taking away from the respective quality of their performances as between them en route to the final they accounted for European and world championship medal winners. Tatalashvili took the first of the bronze medals when in golden score he defeated Vadzim SHOKA (BLR) throwing the Belarussian with o soto gari for waza ari. In the second of the bronze medal contests number one seed Tohar BUTBUL (ISR) lost out to Victor SCVORTOV (UAE) by a single score of waza ari.

Defeated number four seed Ketleyn QUADROS (BRA) to take the gold medal in the -63kg category. In a close fought final that went into golden score it was Ozdoba-Blach who managed to come up with a sharp ko uchi gake that just about warranted the award of waza ari giving the Polish athlete her first Grand Slam gold medal. In the first of the bronze medal contests Ekaterina VALKOVA (RUS) wasted no time, scoring waza ari on Cristina CABANA-PEREZ (ESP) in the first ten seconds with a yoko tomoe nage. The Russian followed this up a few seconds later with left seoi nage for waza ari awasete ippon and a bronze medal. Despite the win, Valkova appeared visibly emotional when bowing off the tatami giving the impression that at 29-years old this was possibly the last time that we would see her on the IJF World Tour. In the second of the bronze medal contests Andreja LESKI (SLO) faced Sanne VERMEER (NED). Half way through the contest the Dutch athlete caught Leski with left morote seoi nage for waza ari in what proved to be the only score of the contest.

In the -70kg category unseeded Madina TAIMAZOVA (RUS) put in a remarkable and gutsy performance to take her first ever Grand Slam gold medal. During the course of what surely must be the best day of her career to date Taimazova defeated the number five, four, one, and two seeds in that order, including the prize scalp of number one seed and double world champion ARAI Chizuru (JPN). Giovanna SCOCCIMARRO (GER) may be considered slightly unlucky when in the final she lost out narrowly to Taimazova. However, the points gained here will put her in a far stronger position for Olympic qualification. In the first of the bronze medal contests Anna BERNHOLM (SWE) defeated Maria PORTELA (BRA). The second of the bronze medal contests featured Hilde JAGER (NED) who gave double world champion and number one seed ARAI Chizuru (JPN) a real scare when she caught the Japanese with ko uchi gari for waza ari. That seemed to stir Arai into action and seconds later Arai came back with a classic uchi mata for ippon.

If there were any truth in the saying that success breeds success then surely Russia would have reason to celebrate with its powerful line-up in the -81kg category. Before that notion was brought into question number one seed and current world champion Sagi MUKI (ISR) got himself involved in the share of a five shido contest with Giyosjon BOBOEV (UZB). Unfortunately for Muki he was the one collecting three. The number three appeared to have bad luck for some today, round three being the point at which current Olympic champion Khasan KHALMURZAEV (RUS) fell to Murad FATIYEV (AZE). He was followed by Abas AZIZOV (RUS) who was bundled out by LEE Sungho (KOR). Fatiyev then accounted for the third of the Russians, Aslan LAPINAGOV (RUS), the latter having to make his way through the repechage to compete for third place. Meanwhile it was left up to Alan KHUBETSOV (RUS) to carry the flag for the home team, making his way to the final where he faced UNGVARI Attila (HUN). The Hungarian had never won a Grand Slam title having had a staggering 35 previous attempts. All credit to Ungvari therefore for overcoming Khubetsov by a single score in the final. In the first of the bronze medal contests LEE Sungho (KOR) threw Aslan LAPINAGOV (RUS) for ippon with a spectacular eri seoi nage ko soto gake combination. In the second of the bronze medal contests Murad FATIYEV (AZE) Yunus BEKMURZAEV (BLR).