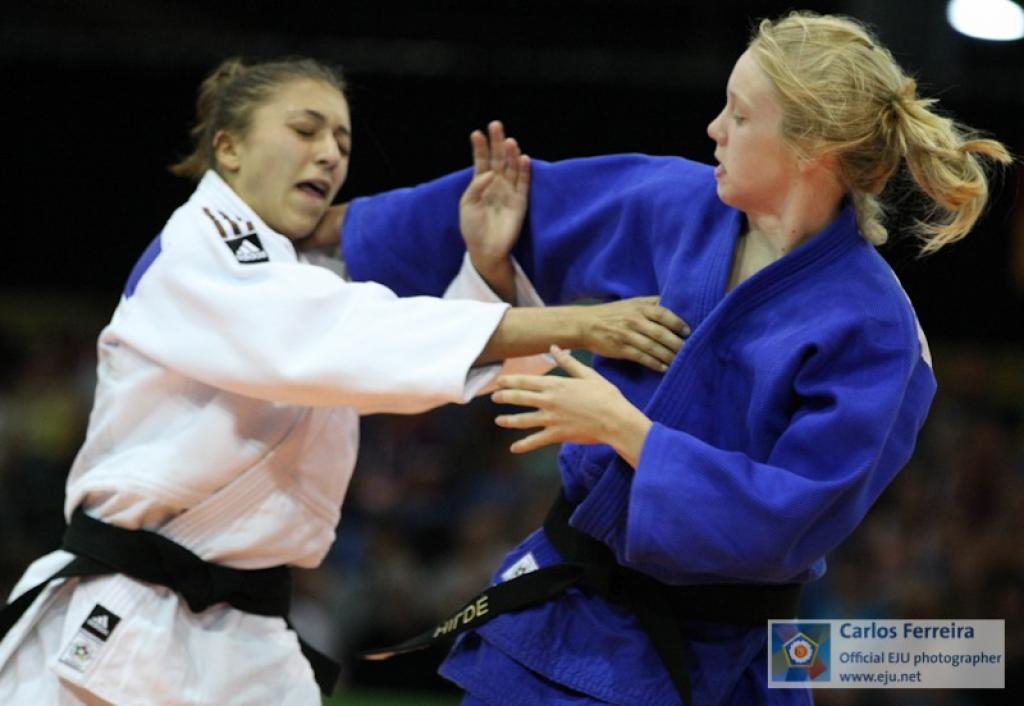 What an impressive day Gwenaelle Patin showcased! The French girl U52kg showed her dangerous skills to everyone at the second day of the European Youth Olympic Festival in Utrecht. In the final she only needed nine seconds to destroy Teodoru Balasoiu of Romania. Not only that, but also her victory in the semi final against the absolute favourite, European Champion Mariam Janashvili of Georgia, was a demonstration of top judo.

Patin defeated four opponents in total to win the gold medal while she didn’t have the reputation to win here, but French judo is apparently this strong. Respect for her semi final opponent Mariam Janashvili who had a severe elbow injury after the devastating armlock of Patin. However she did fight her bronze medal fight and threw Laura Ackermann (GER) for ippon for bronze and cried it out in pain and relief.

Dutch Larissa van Krevel claimed the second bronze medal when she defeated Marine Baumans of Belgium by ippon. Van Krevel lost the semi final against Balasoiu but the Dutch champion came back strongly.

The men’s U60kg title went to Georgia. Giorgi Katsiashvili (GEO). The Georgian lost in the first round of the European Championships against Dzmitry Minkou who was now defeated in today’s final. It tells us that in this age category anything can happen and the competition is getting stronger each year. The speed, power and skills of the young judoka are impressive and due to heavy training camps, the European Tour and the combination of talent brings the level of judo further and makes the competition stronger. Also European Champion Hidayat Heydarov of Azerbaijan was defeated in the semi final but he came back with bronze against Tagir Tagirov (RUS). Alberto Gaitero won a good bronze medal for Spain. He won the tournament this year in Coimbra and finished fifth in Tallinn’s European Championships.

What a sensation in the women’s U57kg final where Dutch Hilde Jager defeated the almost invincible Stefania Dobre of Romania by a great o-uchi-gari for ippon. The Romanian youngster won the European title three weeks ago in Tallinn and was close to winning the European Olympic title as well. It was Hilde Jager though who had a great day in this strong field. Maybe a slow start against Kanatova (SLV) but during the day Jager got stronger and the eruption of joy was an ippon against double European Champion Dobre. Jager who wasn’t selected for the European Championships is equal in her nation with Gabi de By, but today’s victory was sensational for the crowd and her career.

Turkish Ilayda Seyis won a second medal for her country. Seyis defeated Nikoletta Balazs in her last match. Seyis lost to the invincible Dobre. The second bronze was for Jennifer Vogel of Germany who defeated Ukrainian Marta Yermolaeva.

The gold medal for men U66kg was for Ismail Chasygov  of Russia. In the final he defeated Petar Zadro of Bosnia Herzegovina. Although this is not the strongest weight category for Russia Chasygov showed he may be the one to be selected for Miami’s World Championships. He scored a waza-ari halfway the match and Zadro couldn’t come back in the match.

For Zadro it was bad luck. He could be the first of his nation to win the EYOF title. Two years ago he competed in Trabzon where he finished seventh. Also this year at the European Championships he was unlucky with a fifth place and last year’s European lost final.

Chsygov had a good day with strong judo and convincing variable judo. He started the season well and worked towards this highlight. It’s a good grade for his shape for the forthcoming World Championships for Cadets in Miami where qualification for the Youth Olympic Games in Nanjing can be reached.

Lukas Harpf (SLO) won the bronze after he overcame Timo Allemann of Switzerland, maybe the best medal of the season despite his victory in Coimbra. Simon Mamardashvili took the bronze medal for Georgia when he beat Swedish Rasmus Deckart who had a tough but strong day but was penalised in the last match.