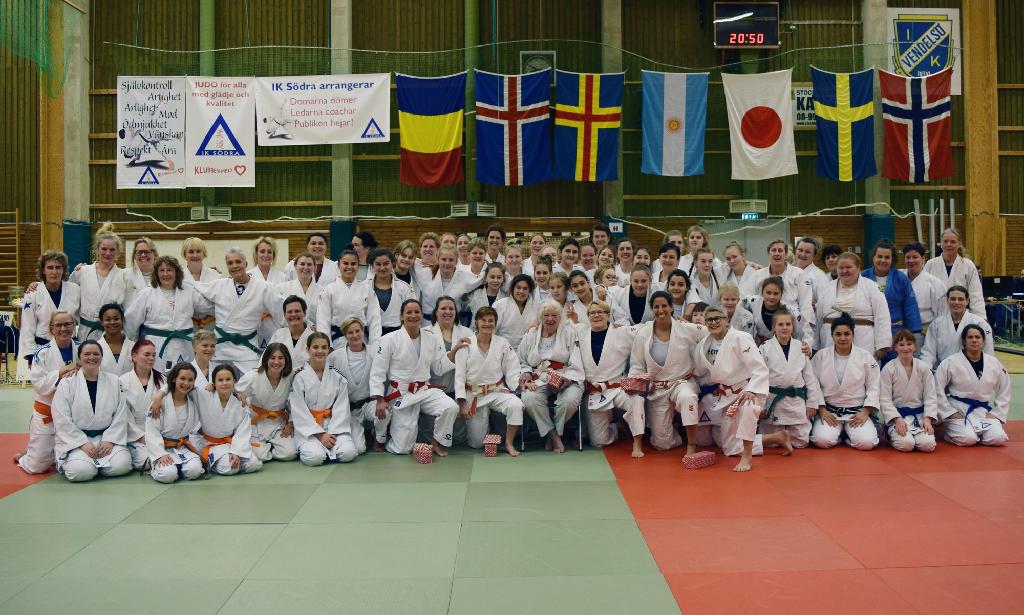 The third weekend in November saw the Swedish Judo Federation; the Judo Federation of the Stockholm District and one of Sweden’s largest judo clubs, IK Södra came together to orchestrate Sweden’s most attended Judo4All weekends. Hosted in the Torvalla Sports Arena located just outside of Stockholm, this was an opportunity for judoka of all ages and abilities to train in the same location.

An International Education Seminar was held over the entire weekend led by 6th Dan, Tomas Rundqvist. This was specifically organised for Special Needs Judo which brought in 25 coaches from Sweden; Romania and neighbouring Finland and was attended by approximately 50 judoka. The participants primarily took part in a training camp which was followed by a competition held on an adjacent mat to the larger event – the Södra Judo Open. This gave the coaches the opportunity to put in to practice the skills introduced during the camp.

Another very special session ran on Friday evening, the ‘Red and White Special Ladies Practise’ as part of the Women in Judo project. The session included six female coaches holding 6th Dan or above coming together to share their expertise with 80 girls and women.

Primarily leading the class was EJU Vice President and first woman to attain a World Championship title in 1980, 8th Dan, Jane Bridge. Assisting Jane was array of women holding their own accolades including Daniela Krukower (7th Dan), who took the World Champion title in 2003 and is a renowned athlete, residing in Argentina. The only woman to hold a 6th Dan in Finland, Jaana Ronkainen took a European title in 1989 including a silver and bronze in previous years and a fifth place in the 1984 World Championships. The Swedish talent pool included Pernilla Ribeiro Novais Andersson (6th dan) who earned a silver in the 2000 European Championships 2000, Solveig Malmkvist (6th dan), the first woman in Sweden earning a black belt and the first woman with a 6th Dan and Ann Löf (6th Dan) who was a main organiser of this event, known for taking the first European title for Sweden in 1975 and is a successful instructor, taking 15 classes per week, having taught the likes of Marcus Nyman. It should be noted that Solveig is now 87 years old and was a huge element for womens judo in Sweden, who also made headlines in Japanese newspapers when she participated in the first World Championships in Kendo.

The Södra Judo Open took place on the Saturday with over 375 athletes ranging from children under 9 years old to veterans, all competing in a friendly atmosphere across five tatami. As part of the inclusion theme, judoka were invited from other countries and saw those arriving from Finland Åland and Georgia. Though many were there simply for the competition, they were offered the chance to stay the next day for a training session led by uchi-mata expert, Daniela Krukower. With 150 extending their trip for this, it summed up the Judo4All weekend, showing truly that ‘Judo is more than sport’.