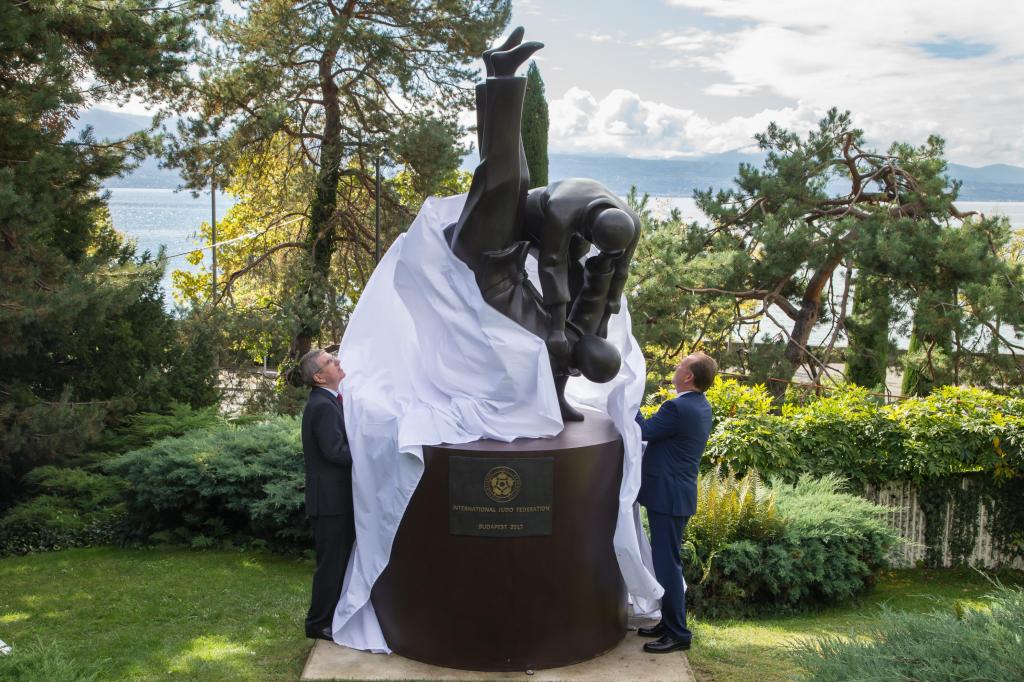 Despite the excitement of competition over the weekend for both European Cadets in Chania, Greece, and the IJF Tour landing in Brazil, another major focal point for the judo community last week was Switzerland.

Despite the excitement of competition over the weekend for both European Cadets in Chania, Greece, and the IJF Tour landing in Brazil, another major focal point for the judo community last week was Switzerland.

Artist, Fodor-Lengyel Zoltan first exhibited his ‘Ippon’ statue at the 2017 World Judo Championships in Budapest and it has since made its way to its final destination and home, the Olympic Museum. Creating such a piece has been of extreme importance to Zoltan,

I did practice judo when I was younger, and then I decided to be an artist. The goal of an artist is to show his work to the world to generate emotions. The Olympic Museum is a dream place for me. What better environment can I find? Now everybody can see the statue and make the connection with the philosophical dimension of judo. I am just so happy.

This moment was enjoyed not only by the Presidents and creator but the IJF Executive Committee and honourable guests were also presents to witness this great moment.

Now available to the general public in the outstanding gardens of the Olympic Museum, the two tonne sculpture is a magnificent addition, representing respect and friendship, the core values of judo. President Bach greatly appreciated the sentiments of the IJF,

One of the goals of the Olympic movement is to blend sports and culture. This is what we are doing on this special occasion. I want to congratulate the artist. I already saw the sculpture in Budapest and I am happy to see it here now. Thank you to the IJF for donating the statue. It is a very symbolic moment, which also illustrates the coming back of judo to Japan next year for the Olympic Games. The Olympic Museum is a special place for the whole Olympic family. I am really happy to welcome you all here.

IJF President Vizer looked forward to the Olympics in Tokyo 2020,

We are very happy to be in Lausanne. It is a great honor for us, representatives of the judo family, to celebrate with the IOC on this special and historical day. We are competing for a better world. I want to take his occasion to thank, Thomas Bach, and the IOC, for this celebration and also for supporting the inclusion of the team event next year in Tokyo. This inauguration is symbolic of what judo can offer and of the values that our sport can give to the society.

Jacqueline de Quattro, Member of the State Council of the Canton of Vaud added,

In the name of the Government of the Canton of Vaud and as a judoka myself, I had the feeling that something was missing in the Olympic Museum. With the unveiling of this beautiful statue, judo has now a perfect place here. This ceremony reveals the richness and diversity of the Olympic movement. Judo accompanies us everyday. Thanks to the sport, we are looking for the right balance. Judo is an amazing school of life. I want to underline the work of the IJF and its President for their engagement, enthusiasm and for respecting and promoting the values of the founder of judo, Master Jigoro Kano. The whole world needs values. I wish long life to the Olympic movement and to judo.

The President of the European Judo Union, Mr Sergey Soloveychik was of course present on this occasion and following the unveiling made his way to the north of Switzerland, to the High Performance Centre in Brugg. Mr Soloveychik witnessed the randori training alongside General Secretary of the Swiss Judo Federation, Samuel Knoepfel and Jenny Gal, the Head of Young Talents. The latter took a bronze medal in the 1996 Atlanta Olympic Games as well as being a finalist in the 1995 World Championships representing Italy.

Following the training session was a meet and greet with the young athletes, enabling them to ask the President about a variety of judo topics. The president of the Swiss Judo Federation , Daniel Kistler was made particularly happy by Mr Soloveychik’s presence,

I am very grateful that Sergey Soloveychik is visiting us. Together with my colleagues we discussed a closer cooperation with the EJU and further projects like ‘Judo in School’. I am very happy that he came to Switzerland and I would like to thank him on behalf of the Swiss Judo Federation.

Mr Soloveychik was equally as pleased at having the opportunity to visit Switzerland and meet with the athletes,

The Swiss Judo Federation is an important member of the EJU and part of the Judo Family and I am very happy to be here. For me it is a major priority to also visit the smaller judo nations and to meet the President but also the coaches and athletes.

The size of a judo nation is not important. All of them have their champions, some of them are renowned on an international level.

At the European Judo Championships, 23 countries took medals. Most of them are smaller nations. I am confident that the Swiss Judo Federation will achieve great results in the upcoming future. The athletes have a big potential to be successful on the highest level. I am sure that together with the experienced Swiss coaching team they will find the right strategy.

During the meet and greet, the organisation of EJU events was highlighted, regarding how well the EJU and local organisers work together excellently. The question proposed was, ‘what is the recipe for success in the EJU?’

The motto of the EJU is ‘Judo – More Than Sport’, and we live and work for this motto. We have a respectful interaction with one another and we live the values of judo. The EJU staff give everything daily and we are happy to give something back to the national federations.

With that in mind, the EJU team now head to Estonia for the Tallinn European Open on the 12th and 13th of October.