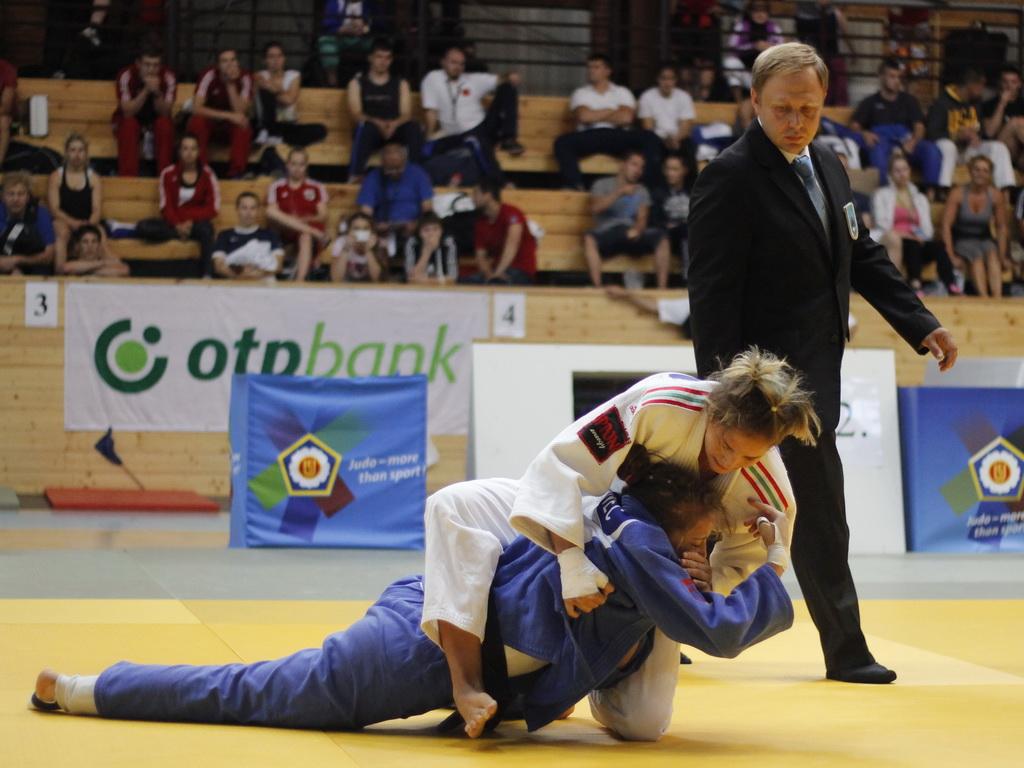 The XXIX. Junior European Cup is held in Paks this weekend. The competition sees 407 players. The first day we had the light weight females on showcase alongside the heavy weight male categories. Turkey took the lead of the medals table, followed up by Germany. Hungary has taken the third place of the medal table after the first day.
The competition was divided into two sections. In the -81kg category 36 players were battling for the gold medal. Number one seeded, Viktor Makukha (UKR) took the third place after defeated Viktar Kliavusau (BUL) in the bronze medal contest. Filip Stancel (SVK) claimed the other bronze medal after overcome Davyd Kharebava (UKR). In the final, last years’ Junior EC bronze medallist, Ivaylo Ivanov (BUL) defeated David Gabaidze (RUS). Ivanov Ivaylo also won the U23 EC last year.

With a small entry of 13 players in the -44kg category Russia took the majority of medals. The bronze medal was taken by Mariia Lebedeva (RUS) and Sitora Boymatova (RUS). In the final Sabina Giliazova (RUS) was facing Nesrin Kartal Cetin (TUR). Gliazova was leading by three penalties until the last 30 seconds of the final contest where Nesrin Kartal took a risk a left handed makikomi attempt which than she scored for yuko. Giliazova worked hard until the very last moment but could not overturn the final results.

In -90kg 26 competitors were listed on the draw this morning. The host nation claimed one of the bronze medal in this weight class after an astonishing Waza-ari throw by Ohat Zalan (HUN) against A. Oguzhan Efemgil (TUR). Straight after the throw the Hungarian followed it into osei-komi-waza which resulted an Ippon win for him 30seconds into the contest. George Smith (GBR) claimed the other bronze medal. David Tekic (GER) was facing Laurin Boehler (AUT) in the final where he demolished his opponent by yuko, waza-ari and an Ippon score too. David Tekic was the only one to medal today from the male team of Germany.

Turkey dominated in the -48kg category among the 24 competitors. Hungary and Romania both collected a bronze medal each in this weight class. Pupp Reka (HUN) overcomes Cristina Budescu (MDA) to claim the bronze front of the home crowd. Alexadra Pop (ROU) was up against Anna Pashina (RUS) to win the bronze medal. Turkish final was witnessed in this weight class. The gold medal was decided in-between of Dilara Lokmanhekim (TUR) and Gulkader Senturk (TUR). Senturk threw Lokmanhekim for waza-ari right after the first ‘hajime’. Shortly after the throw Senturk received three penalties from the referee. Senturk was well under pressure to not exceed the number of shidos on the score board. Lokmanhekim kept on pressuring her team mate with a right sided ouchi-gari. In the last minute of the final, Lokmanhekim once more gone for the ouchi-gari attempt with a cross grip. However, Senturk took an advantage of Lokmanhekim’s attack and countered her with kosoto-gake.

18 competitors were entered in the -100kg category where the bronze medal was collected by Slobodan Djorda (SRB) and Semen Rakita (UKR). Hungarian interest was booked in the final by Rudinszky Adam (HUN). The Hungarian titan was facing Maximilian Hagender (AUT). The Austrian dominated the final as he scored shortly after the beginning of the final.

The one and only Hungarian gold was claimed in the -52kg category. Szabo Katinka (HUN)used to compete a weight class above and this was her first ‘trial’ in the new weight class. She certainly made her debut after winning most of her contest by Ippon, including the final against Tihea Topolovec (CRO) by an armlock. Bronzes were taken by Anastasia Kovalenko (RUS) and Oleksandra Palagicheva (UKR).

The O100kg category sees 14 judoka. The home crowd was excited to see a Cadet fighter in the final of this weight category. Joo Akos (HUN) just returned home from Athens where he was competing at the Cadet EC last week. Joo overcome his first three opponents and soon find himself preparing for the final where he was up against Yakiv Khammo (UKR). Khammo was leading the contest and throw left handed drop seoi-nage for a yuko score which he flowed than up by an osei-komi-waza to end the final. Mircea Croitoru (ROU) and Anton Rudnyk (UKR) took the bronze medals.

Bekky Livesey (GBR) was the favourite of the -57kg category across the 25 competitors. Livesey thrived through to the final where she faced Amelie Stoll (GER). Livesey was leading by two penalties when a minor error occurred on the mat from the British player. Stoll had a right sided harai-goshi attempt which Livesey stepped away from. As she stepped away, a mindless reaction caused her losing out on the gold medal as she hooked into her opponent’s leg from behind. Livesey had to settle for the silver medal. Third places have been claimed by Daira Mezhetskaia(RUS) and Jennifer Schwille (GER).

Watch all the photos in our photo gallery