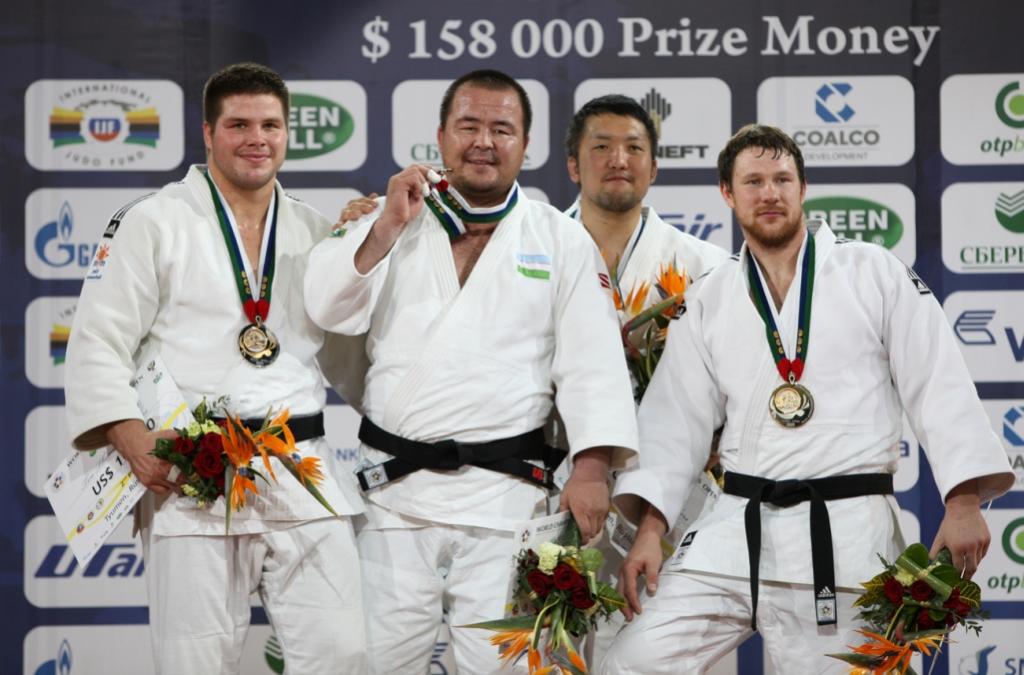 Uzbek Abdullo Tangriev has won the world title at the Open Judo World Championships in Tyumen 2011. The silver medallist of the Beijing Olympic Games 2008 was able to defeat five heavy opponents.
For the semi finals some good, but maybe surprising judoka qualified for the semifinals: Most expected was the 2004 Olympic champion Keiji Suzuki (JPN) and Abdullo Tangriev. The other two semi finalists were Hungarian Barna Bor, bronze at the European Championships 2009, and Sung-Min Kim(Korea).

The quarterfinals were very tense. In the first fight Abdullo Tangriev defeated the bronze medallist at the 2010 World Championships, Hiroki Tachiyama (JPN). The second contest was won by Sung-Min KIM (Korea) against the Japanese Kazuhiko Takahashi. In a very interesting combat, the local favorite Alexander Mikhailin (RUS), triple world champion, was defeated by Bor. The last quarterfinal offered a contest between two Olympic Champions of the Athens Olympic Games 2004. The Japanese Keiji Suzuki (113 kg) defeated Ihar Makarau of Belarus (137 kg).

In a highly anticipated combat, the public followed the disproportionate fight between the Greek World Champion U90kg, Ilias Iliadis (96 kg) and the Brazilian Champion Daniel Hernandez (150 kg), a difference of 54 kilograms. The Greek judoka had the chance to win, after a spectacular “uchimata”, but the Brazilian counterattacked and won by ippon (oguruma). This time, “the huge Goliath” defeated “the cleaver David”.

The Semifinals: Abdullo Tangriev defeated Sung-Min Kim after the golden score by hantei. Keiji Suzuki was defeated by the young Hungarian judoka Barna Bor by ippon.
The bronze medals were won by Suzuki and Mikhailin. The IJF jury awarded the “Ippon award” to Keiji Suzuki, for his spectacular techniques.

The final offered a very tight contest. Abdullo Tangriev won the World title against the Hungarian judoka Bor, by ippon for uranage. After ten World Championships participations, Tangriev finally hit the jackpot and took the highest position. It’s his fourth medal after winning the bronze in 2003, 2007 and 2009. He is the second for Uzbekistan to win the world title after Rishod Sobirov U60kg (2010, 2011).