Tatamis for Euro-2012 have arrived in Chelyabinsk 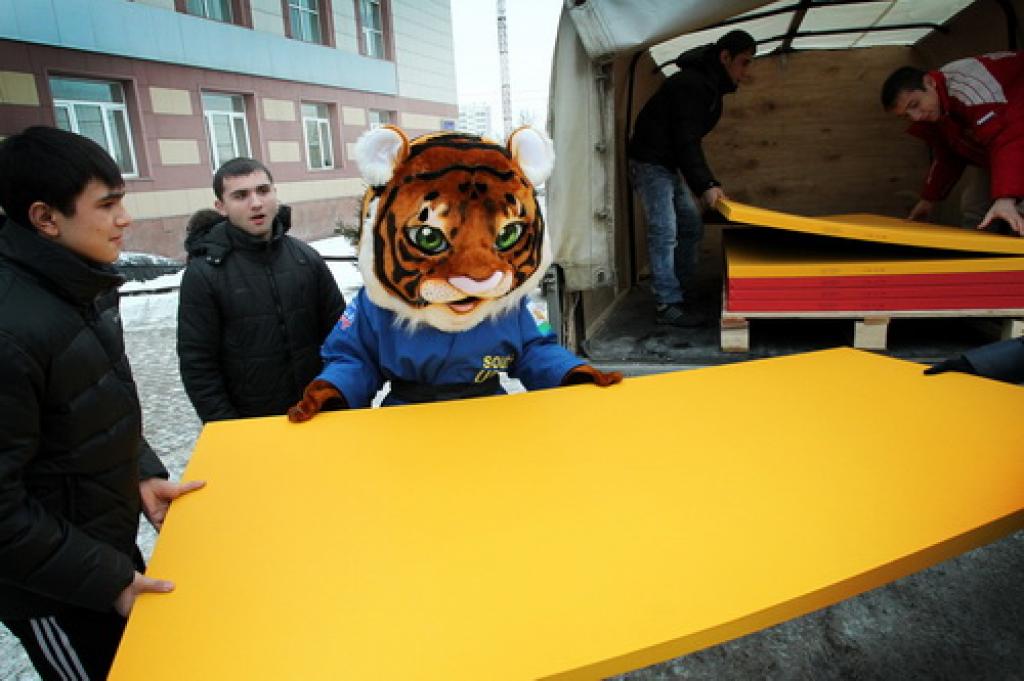 Tatamis for Euro-2012 have arrived in Chelyabinsk from France
On the eve of New Year’s Day tatamis were delivered to the capital of South Urals from France. These tatamis of high quality comply with the standards of European Judo Union. Simultaneously the sale of tickets was launched on the web site of Championship http://www.eurojudo2012.ru.

All tatamis which will be used in Euro-2012 are produced by Noris, a company which has been specializing in the manufacture of sporting equipment for many years. Every bright red tatami with yellow inserts possesses a brand – a sign of European Judo Union.

As explained by a vice-president of Regional Judo Federation Denis Lapotyshin, there are two kinds of tatamis: for trainings and for competitions. Those which are used for fights are harder and nonslipping. All in all 20 tatamis were delivered to Chelyabinsk, 6 sets are particularly for competitions, and they will be installed in Ice Arena Tractor for European Championship.

After the championship all tatamis will be handed over to children’s sports schools of Chelyabinsk region so that young judokas could train on a modern high-quality covering.

The sale of tickets has started four months before the beginning of competitions. Tickets of two types – morning (preliminary) and evening (final) programmes can be ordered even today on the official web site of European Championship in a tab for tickets http://tickets.eurojudo2012.ru/actionList.do

There are two types of payment: with Visa or Master Card cards or through Euroset terminals. Visitors can also choose the way of tickets delivery. After the payment a ticket can be either printed out individually or one can order its delivery to any part of the city. After the New Year’s Day tickets can be also bought in booking offices of Ice Arenas Tractor and Arena-Ural.

Any resident of the region will afford an opportunity to observe the most expectant event in the South Urals. The cost of morning tickets – 150, 200 and 300 rubles, evening tickets – 200, 300 and 500 rubles.
Judo Federation has issued a special run of tickets not for sale, which will be handed over to the athletes of Children’s and Youth Sports Schools, Veterans of Sport and disabled people.

Recall that the fights of strongest judokas of Old World will be held in Chelyabinsk in April 26-29, 2012. More than 2, 5 thousand guests and participants from 50 countries will arrive in the capital of South Urals. This is the greatest start on the eve of 2012 London Olympic Games and the last chance for European sportsmen to declare themselves and to gain additional ratings.

The governor Mikhail Yurevich underlined the importance of the coming championship for the South Urals, he said: Chelyabinsk is getting ready for the judo festival very seriously. We are glad that our city will become the meet place for judo fans from different corners of the world. We will apply maximum efforts to make the stay of sportsmen and guests comfortable and memorable.

Watch all photos of the preparations here:
http://bit.ly/tgEpbv