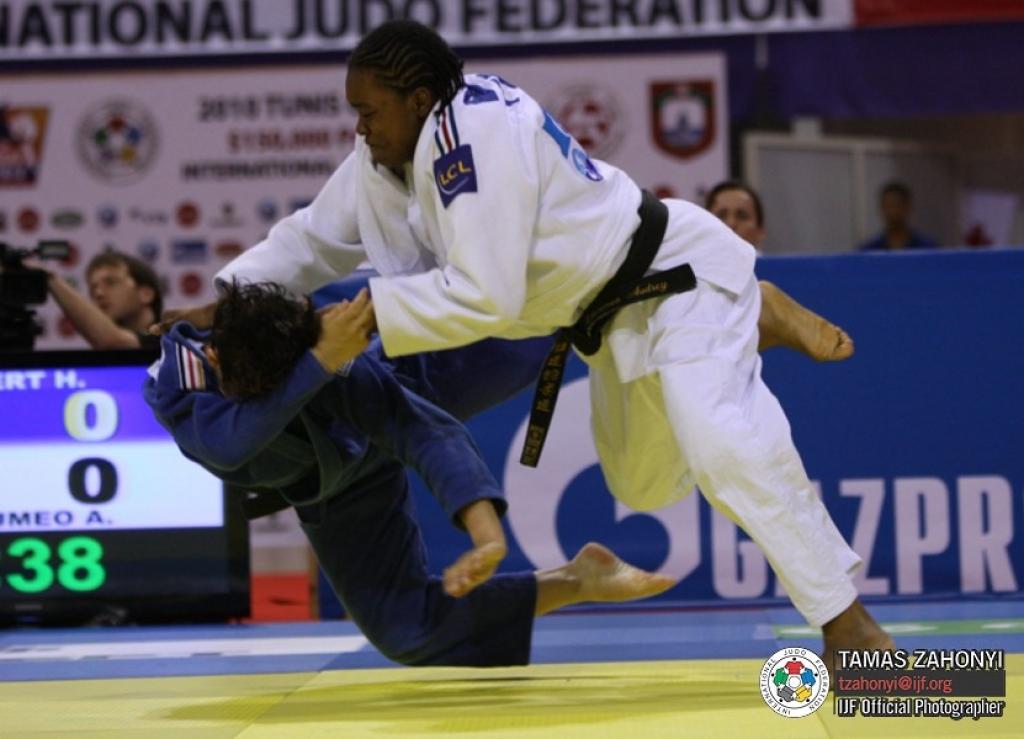 Again a European final in the women’s U78kg class and again a French woman to win in the end. At the last day of the Grand Slam in Tokyo Audrey Tcheumeo was able to win her first Grand Slam ever in her career. In the final she defeated Catherine Jacques from Belgium.
Tcheumeo, former U20 and U23 European Champion recently won the French Championships and had also won the Grand Prix of Tunis this year and was one of the major favourites to take the World Title in September. In Tokyo she finished 17th and today she took clear revenge.

Yesterday Clarisse Agbegnenou (FRA) defeated her compatriot Gevrise Emane in the final U63kg. France finished second in the medal tally behind Japan that collected 11 gold medals, and 7 silver medals. Last year Japan won 11 titles as well but had more judoka in the finals.

U70kg Dutch Edith Bosch qualified for the final. The experienced woman won silver today after she lost to Haruka Tachimoto (JPN). Tachimoto won her last three events in Tunis, Rotterdam and Tokyo now. Her last loss was in the final of the World Cup in Sofia at 31 January this year, 12 matches ago.
Bosch is back on track after a nasty year. Rasa Sraka of Slovenia finished third.

Surprising was to see Ariel Zeevi (ISR) in the final U100kg. The 33-year old Israelian is one of the best ever for his country, was finally able to reach a final again since March 2009 when he won the World Cup in Warsaw.
In the final he lost to the unreachable Takamasa Anai who has now won the Masters in Suwon, the Grand Prix of Düsseldorf, The Japanese title, the World title and the World Team Title this year and added the Grand Slam of Tokyo today. Nonetheless he also lost 3 matches this year out of 26 in total in 2010.

Korean Kim Sung-Min won his first ever Grand Slam in his career. Last week he won the World Cup in his own country in Suwon. Today he didn’t have to fight the final against the injured Kazuhiko Takahashi (JPN). Takahashi won his match against Andreas Toelzer because of a disqualification for the German fight who forced the arm of Takahashi by accident but needed to take the consequence of the disqualification. He finished third, Takahashi couldn’t proceed the fial match.
Kim who had also beaten World Champion Daiki Kamikawa in the semi final won the gold.

Next week the last event of the year, the IJF Grand Prix in Qingdao.