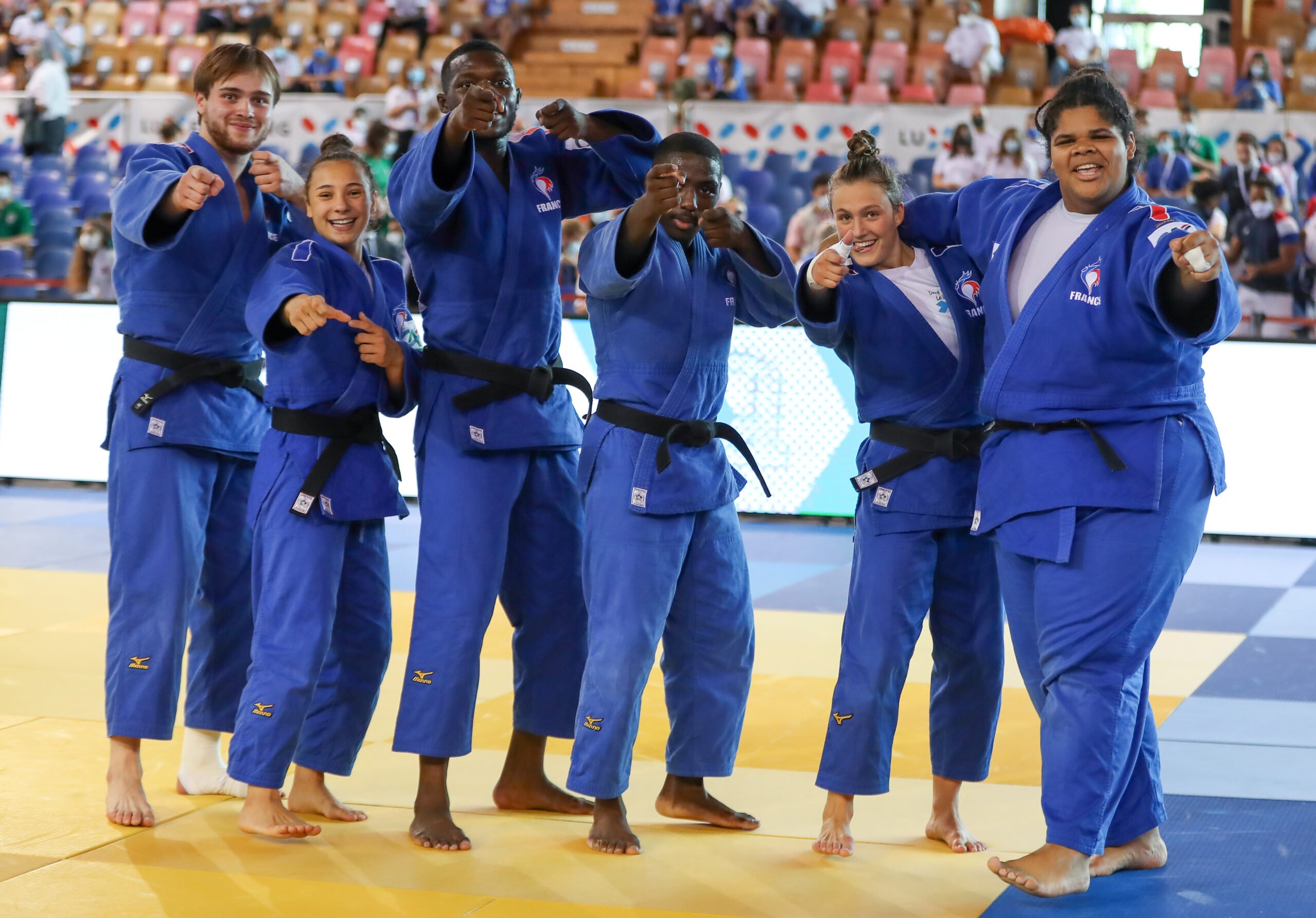 No matter if it is cadet, junior or senior, the mixed team event is always incredibly exciting and draws all of the athletes together to support their teams and be the loudest supporters in the arena.

Today was no different for the Junior European Championships 2021. The following nations entered very strong teams to be in with a chance to covet the mixed teams title; France, Georgia, Germany, Hungary, Israel, Netherlands, Poland, Portugal, Russia, Turkey and Ukraine.

In the end it was Russia, Turkey, Georgia and France would battled in out in the semi finals.

Junior European silver medallist Faiza MODKAR took the first win for France, and the second came from Joan-Benjamin GABA. Bringing it back for team Georgia was Nino GULBANI who gave a strong performance and stole the third round win. The fourth was a golden score decided between the current junior European champion, Nika KHARAZISHVILI and the -90kg #1 seed in in the individual event, Maxime-Gael NGAYAP HAMBOU. With great attacks from both it was set to be a big finish despite both clearly exhausted from the previous day and a minute in to golden score, the Frenchman secured France’s third win. The overall match was decided by the +78kg silver medallist, Coraline HAYME in osaekomi.

France went to meet Turkey in the final and Georgia in to the bronze medal contest against the Netherlands.

Turkey initially had Russia on the back foot after a first round win from Hasret BOZKURT. This was followed by an exciting round between Azamat KABISOV (RUS) and Umalt DEMIREL (TUR) which ended up in favour of the Russian. Once again the women of Turkey rallied and Habibe AFYONLU dominated to put their team back in the lead, only for Adam SANGRIEV (RUS) to even the score again. The pressure was on for both Alana ALBOROVA (RUS) and Hilal OZTURK (TUR) in the +70kg round, both teams edging forward and desperate to win. Once again the women for Turkey had something to celebrate with a win from Ozturk. A subsequent win from Nodar ONOPRIENKO (RUS) made the head to head a draw. The digitally generated decision led to a decider of the -57kg women. Once again Bozkurt triumphed and put Turkey in with a chance of gold. Russia went in to the bronze contest against Poland.

Kicking off the bronze contest was the -73kg men, a quick win from Saikhan SHABIKHANOV (RUS) put his team in the lead early on. Fortunately for Poland, Katarzyna SOBIERAJSKA evened the score. In a brutal contest, Dymitrij JANCZYLIK (POL) picked up two penalties trying to defeng against the strength of Egor ANDONI, but two waza ari scores from the Russian put them in the lead. Alana ALBOROVA of Russia followed suit with a great win meaning that Dmitrii IAKUSHEV could be the one to make it a bronze medal win for Russia. Michal JEDRZEJEWSKI (POL) simply couldn’t match up on this occasion and Iakushev secured a podium place for his team.

Following a semi-final defeat, Kote KAPANADZE pulled it back and gave Georgia their first win, though he held a waza ari score for most of the contest, he secured the ippon with three seconds left on the clock. Joanne VAN LIESHOUT continued her big performances of the day taking the first win for Netherlands, all still to play for. Next up was a rematch of the -90kg final between Nika KHARAZISHVILI (GEO) and Tigo RENES (NED). Today was a much different story, perhaps with less pressure, Renes was able to perform better or the Georgian was simply spent. In an incredibly close point at the very end, confusion for both teams, the final score went to the Dutch. Marit KAMPS (NED) continued the momentum and put her team two points ahead of their opponents.

Next up were Saba INANEISHVILI and Lars VISSERS, it was the duty of the former to win in order to keep Georgia in the game, and so he did. The winning contest came from Elin HENNINGER for the Dutch, her contest was dynamic and her transitions rapid but Eter ASKILASHVILI (GEO) did a fantastic job of escaping for the majority of the contest. The onslaught from the Dutch didn’t end and eventually Askilashvili succumbed to shime waza meaning the bronze was firmly going home to the Netherlands.

Joan-Benjamin GABA (FRA) and Umalt DEMIREL (TUR) opened the spectacle and a seoi nage from the French determined the outcome. Melodie TURPIN (FRA) was next to help her team to glory, locked together with Habibe AFYONLU, the Turkish athlete tried her best to defend but was unable to and ceded a waza ari score. Turpin transitioned to ne waza, first in to sangaku that Afyonlu managed to escape, but the movement was to her detriment, the French kept the arm for juji gatame.

Joan-Benjamin GABA was very happy with his team’s performance,

I lost in the second round in individual competition, but this was not the end. I was very eager to win today and get a medal for the team. We trained hard and we have a great team spirit, that’s why the French team is always strong.

To put it simply, France were unstoppable. Both Maxime-Gael NGAYAP HAMBOU and Lea FONTAINE won in their contests to make it a 4-0 defeat. France have already made history this year in the Olympic Games, taking the first mixed teams title and now their junior team have kept the ball rolling by taking the gold undefeated in the final round.