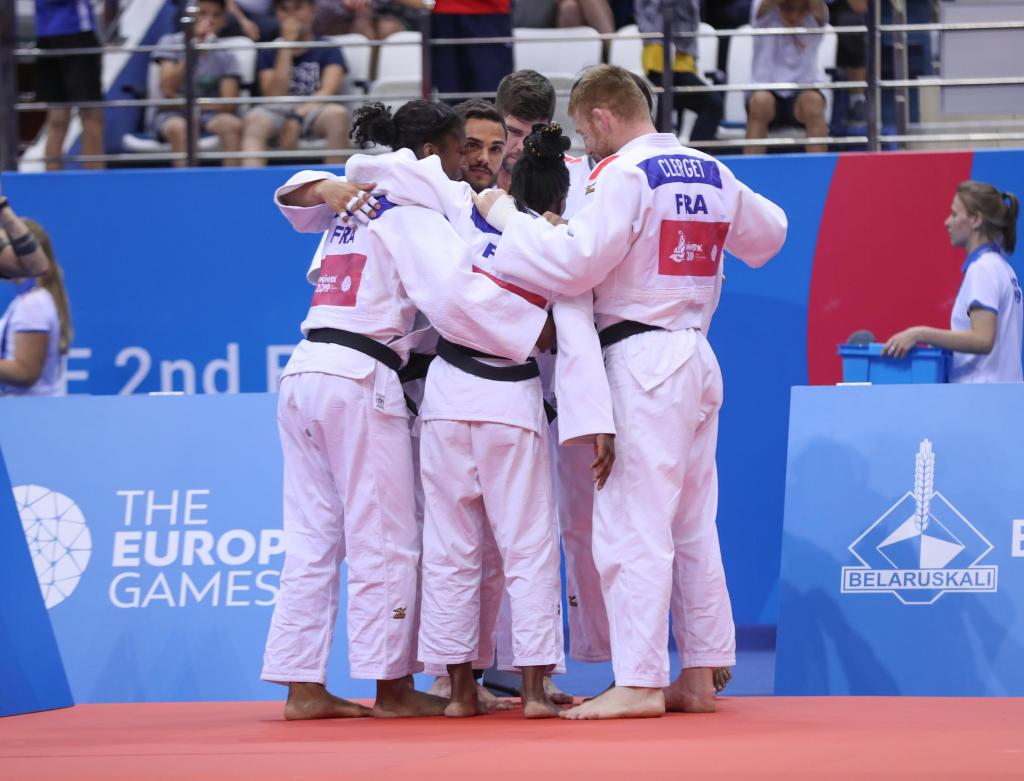 There is nothing more exciting in the world of competitive judo than the team event, male of female, junior or senior, whatever the configuration. By the time that the Tokyo 2020 Games gets underway the favourites for the first ever Olympic judo team competition (mixed or otherwise) will undoubtedly be host Japan. That the team event is to be included in the Olympics is a great achievement for the sport; that it is to be a mixed team (3 men 3 women) is historic for the International Olympic Committee and very likely cements judo’s position as one the most important sports on the Olympic programme.

It is well worth considering that the mixed team event will be making its debut at the Tokyo 2020 Games. In this format, teams of three male judoka (under 73kg, under 90kg and over 90kg) and three female judoka (under 57kg, under 70kg and over 70kg) drawn from the individual competition will join forces to become the inaugural Olympic Judo team champions. Those countries with teams that have a balance between men and women are expected to stand the best chance of doing well in the event.

Whilst the Japanese will as usual seek to maintain an air of reserved confidence the odds of taking the gold medal would appear to be heavily in their favour. In the first instance as hosts, their athletes will not need to qualify. Second, they will also be the number one seeded team. There are however, a few points worth noting. The make up of the team could for example (for men) include an -60kg or -66kg to fill the -73kg spot. Likewise (for women) an -48kg or -52kg athlete could compete in the -57kg spot.

The French are brought up on club competitions and have a very strong belief in the team event being able to produce results completely different from the individual event. Their men may not have the same success level at present as their women but a possible trio of Guillaume CHAINE, Axel CLERGET and Teddy RINER will provide a stiff test for any team. As for the women from whom the French are likely to be able to choose form these include Sarah Leonie CYSIQUE, Marie Eve GAHIE, Anne Fatoumata M BAIRO, Julia TOLOFUA, Romane DICKO, Amandine BUCHARD, Clarisse AGBEGNENOU and Madeleine MALONGA.

As ever, nations with more than one qualified athlete per weight category will have to decide who it is that they will send to the Olympics. Once that is done then that individual will become eligible for the team event. Once that process has been completed we will have a clearer picture of the make-up of the teams. For time being speculation will continue regarding whether it will be Denis IARTCEV or Musa MOGUSHKOV, Mikhail IGOLNIKOV or Khusen KHALMURZAEV, Inal TASOEV, Anton KRIVOBOKOV or Tamerlan BASHAEV. For the women the choices are likely to be Daria MEZHETSKAIA or Anastasia KONKINA, Alena PROKOPENKO or Madina TAIMAZOVA but at +70kg it will most likely be Ksenia CHIBISOVA.

Exactly who will go to make up the Dutch team is still pretty much up in the air. It will be a huge task for Tornike TSJAKADOEA to compete at -73kg. Things begin to look a lot better at -90kg where the Dutch have current world champion Noel VAN T END. Thereafter it is a shoot out between Roy MEYER and Henk GROL for the +90kg spot. Sanne VERHAGEN looks set to go at -57kg, but there will be a battle royal for the -70kg spot between Sanne VAN DIJKE and Kim POLLING. Sad news for the +70kg spot will likely see Guusje STEENHUIS having to step up after the serious knee injury suffered at the 2020 Paris Grand Slam by Tessie SAVEKOULS.

Another country with a strong tradition of team competitions is Germany. Igor WANDTKE and Anthony ZINGG are currently neck and neck whilst Eduard TRIPPEL seems solid at -90kg. Johannes FREY is showing signs of being able to cope with the move up to super-heavyweight but Sven HEINLE is still in with a chance. The likely trio for the German women is Theresa STOLL, Giovanna SCOCCIMARRO and Jasmin Grabowski.

Without doubt the move to mixed teams has affected Georgia the most. Three times world champions the Georgian men were a force to be reckoned with The signs for the development of their women’s programme is truly promising. But, in addition to Eteri LIPARTELIANI at -57kg they will need to qualify Mariam TCHANTURIA at -70kg and possibly Sophio SOMKHISHVILI at +70kg. Things begin to look much more threatening when one looks at the men’s line up that could include Lasha SHAVDATUASHVILI, and one from Beka GVINIASHVILI or Lasha BEKAURI. As for the +90 then Guram TUSHISHVILI will take that spot with team captain Varlam LIPARTELIANI (qualified at -100kg) available should he be needed.