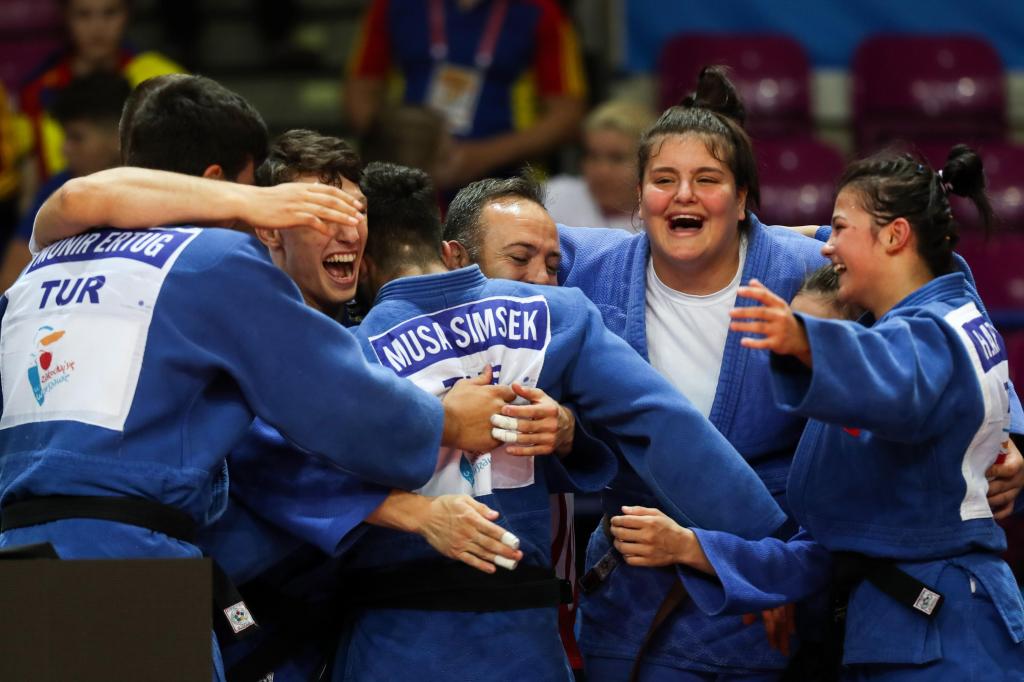 The Cadet European Judo Championships 2019 came to a close following the riveting Mixed Teams event. Altogether we had eleven teams competing from across Europe to take the number one position.

Both the Turkish and Romanian teams had an incredible day and demonstrated incredible talent as well as fighting spirit which caused a stir in the crowd throughout the preliminaries. In the final, the support was deafening and the atmosphere electric.
Starting off was the -60kg category, Robert BOLDIS (ROU) and Muhammed DEMIREL (TUR) very different in their fighting styles, the latter took silver a few days earlier and was desperate to make up for his final loss in the individuals. The first win went to DEMIREL, setting the tone for the following contest.


Next up was Ayten YEKSAN for Turkey who put a waza ari score on the board early in the contest,  Florentina IVANESCU (ROU) spent the remainder of the four minutes trying to even the score but it wasn’t to be in the -63kg category, making the score 2-0 to Team Turkey.

David FODOR (ROU) tried to bring it back for the Romanians but it seemed that nothing could stop the Turkish judoka in the final, Musa SIMSEK made it a 3-0 lead with a swift transition in to shime waza. The final contest was in the +63kg category and unfortunately for Romania, Turkey had the advantage of Hilal OZTURK who had taken a bronze medal the day before and had a tremendous height advantage over the Romanian opponent, Denisa MARIN. MARIN realised there was simply no escaping ground work and submitted giving Turkey their final win.


We were really, really glad to enter the final after some tough matches, we are incredibly happy with their silver and so proud of our athletes. The next stop for them is Baku in EYOF and the World Championships later on in the year. This team has worked really hard and we will definitely stay together this year.


Today we were the best, there is no question, we have the gold medal. We have had two strong months of preparation and I’m very pleased with this team.

The team train together every two weeks and as you see, they have built good relationships and are very supportive of one another, though there may be a couple of changes before EYOF, I am very happy with this result and I know they are too. Now we are all looking forward to the future and hopefully the same results in EYOF

Many thought that the medal table leaders, Italy could repeat their performances from the previous three days but after seeing out the French team in their first round, they came across finalists, Turkey, suffering a 4-0 defeat. Following this they found themselves in a draw situation against Georgia in the repechage contest, the +81kg was randomly selected and the current Cadet European Champion, Giga TATIASHVILI showed everyone why he was worthy of the title, narrowly seeing out the Italian side and taking a place in the bronze fight against Team Netherlands.

The Dutch team started off very strong against Austria which led them nicely in to the semi final with the Romanian team, who, unfortunately for Team Netherlands, were on a roll. The contests were so close that the situation came to a head with a 3-3 result. The random draw pulled up the -48kg category and so the young women stepped back on the tatami to decide who would make it to the final, the eventual success story was Team Romania.


The bronze fight went 3-2 following a difficult +81kg contest between Georgia’s TATIASHVILI and Netherlands Jules BLOM, both athletes fought in the +90kg category the day prior, and the European Champion spun his opponent with sasae tsurikomi ashi. Unfortunately for the Georgian team, the Dutch climbed back to even the score with their -48kg athlete, Joshlyn SUPUSEPA executing a perfect o uchi to score ippon and kept them in with a chance for the bronze.

The +63kg category was the deciding weight category in the random draw, Yael VAN HEEMST (NED) against Nino GULBANI (GEO). The Dutch came out on top in this round, VAN HEEMST taking the first bronze of the day for Team Netherlands.


Dutch coach, Chiel WILLEMS, spoke with us after the medal ceremony,


It was very important for us because our individual days were just a little disappointing. Of course still a little bit of disappointment in the semi final but it was incredible to see the fighting spirit return to them for the bronze. At this age, the process is so so important. They did an amazing job.

We have some of these athletes going to Baku for EYOF but another group also. It is great that we have the choice to do this because we have a lot of young talent that we want to develop. We cannot predict who will become Olympic or World Champion when they are this age so our job is to develop the wider group and provide this experience for these athletes in order to grow.


Hungary fought back through the repechage round against Austria for their chance against Russia. They suffered at the hands of Romania, knocking them out of the running for the gold or silver medal today with a 4-3 defeat.

Russia are typically a very strong team and showed their impeccable standards today, their senior counterparts taking the gold medal in the Mixed Teams event in Minsk at the beginning of the week. They took a 4-0 win in the first round against Georgia, who narrowly missed out on the first bronze. The second round for Russia was a different story, Team Turkey stormed through the team to make it a 4-0 win for themselves.


Russia picked themselves back up to fight against the Hungarian team for the bronze medal, going in hard in their first, -60kg contest with the #1 seed in the individuals and eventual bronze medalist Andarbek ARSUNUKAEV who executed the ippon-worthy o uchi gari.

The second contest was blinding, Iana RADCHENKO of Russia scoring ippon within the first three seconds with soto make komi, unfortunately NYIRI Nikolett (HUN) didn’t get the chance to find her place in the contest.

Hungary started to pull it back in the third round with an ippon from SAFRANY Peter against Adam SANGRIEV, though the comeback was short-lived as Olga MIKHEEVA took the win for Russia in the +63kg category and Russia sealed the deal in an exciting and dynamic fight between Akhmed MAGOMEDOV and IJJAS Attila in the +81kg contest making it 4-1.


It is very important that we medalled but we had high expectations for them and wanted a place in the final. It is hard in judo, we explained to them that if you lose, you have to do more to come back to take the bronze and still have a chance to be on the podium.

They wanted it very badly, the team have been preparing in Porec, we arrived for the EJU Judo Festival and stayed on afterwards.