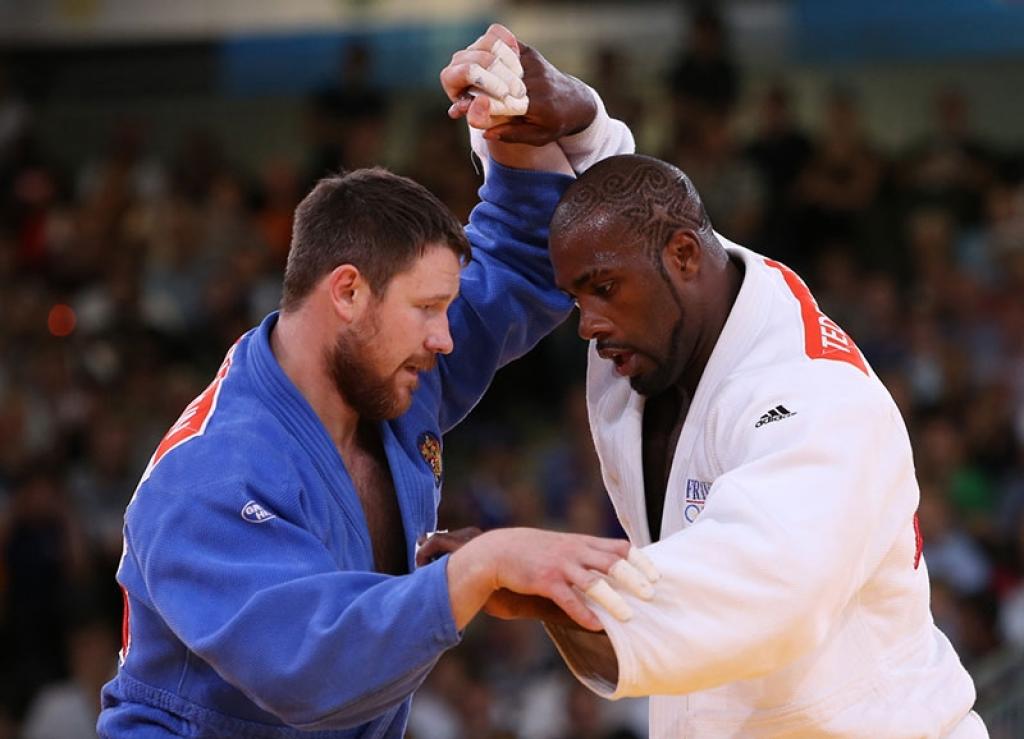 Teddy Riner has done it! The French super star finally won the desired Olympic title at the last day of the Olympic Games judo tournament. All eyes were on him and he knew but tried to approach as a normal tournament. A great success for European judo taking over the Olympic title of Japan’s Satoshi Ishii. In 2008 Riner won bronze but today he was as dominant as he was over the past year in this Olympic cycle.

Another tremendous success was the respectful silver medal for Alexander Mikhailin. At this first Olympics at the age of 32 he was determined to make it a success. Inspired by the excellent performances of his teammates over the week he grew into the tournament with excellent victories over Silva (BRA) and Toelzer (GER) in the semi final. Riner was too powerful for the Russian who was World Champion three times in 2001 and 2005. Mikhailin couldn’t come into the usual athletical way of judo. Riner gave him no chance and because of accumulating penalties Riner won the title and celebrated kneeling down and finally showed his controlled emotion. He respected Mikhailin’s impressive career ad congratulated him with his performance.

Riner is the current World Champion the world’s strongest since 2007, but made two mistakes losing at the 2008 Olympics and 2010 Worlds, but whipped all of that away today in the electric ExCel Arena. Many French supporters shouted Teddy to the victory that he shared with many French at the tribune. After his fans he went to his friends and to David Douillet, the former double Olympic Champion.

Germany’s Andreas Toelzer who is the World’s vice world champion over the last two years won bronze today. After his loss against Mikhailin he recovered well and defeated Ihar Makarau of Belarus, the 2008 Olympic Champion U100kg. It was Germany’s fourth Olympic medal this tournament after Bischof took silver, Peters won bronze and Thiele silver.
Rafael Silva won the second bronze medal after taking Kim Sung-Min down by submission.

In the women’s event Karina Bryant was the unbelievable winner of the bronze medal, but what is unbelievable after such a tournament where anything could happen!
Bryant did her last trick in her career with success and defeated Lucija Polavder (SLO), Gulzhan Issanova (KAZ) and Iryna Kindzerska (UKR) in her last fight. What a great boost for British judo taking the second medal. The women have put the UK back on the map of international judo. Britain’s has got such great history, but lacked a medal since 2000, now made up with two shining medals for Gemma Gibbons and Karina Bryant. Suddenly it is the best ever performance for Great Britain since 1992.

The gold was captured by Idalys Ortiz who was a big surprise as Tong Wen was as much the expected Olympic Champion as Teddy Riner. Those medals were in fact reserved… on paper. Judo won today with excellent winners writing history for their nations. Ortiz is the 6th Olympic Champion for her nation but the last since 2000.
Mika Sugimoto (JPN) won the silver after she defeated Karina Bryant in the semi final. Tong won the bronze.

What a great success for European judo taking 29 medals, more than 50%! The best ever result.

Time has changed and judo has become more competitive, this is an ultimate performance for Europe.

Read all reactions later on in our blog in our community
http://community.eju.net/judofriends/judo_blogs