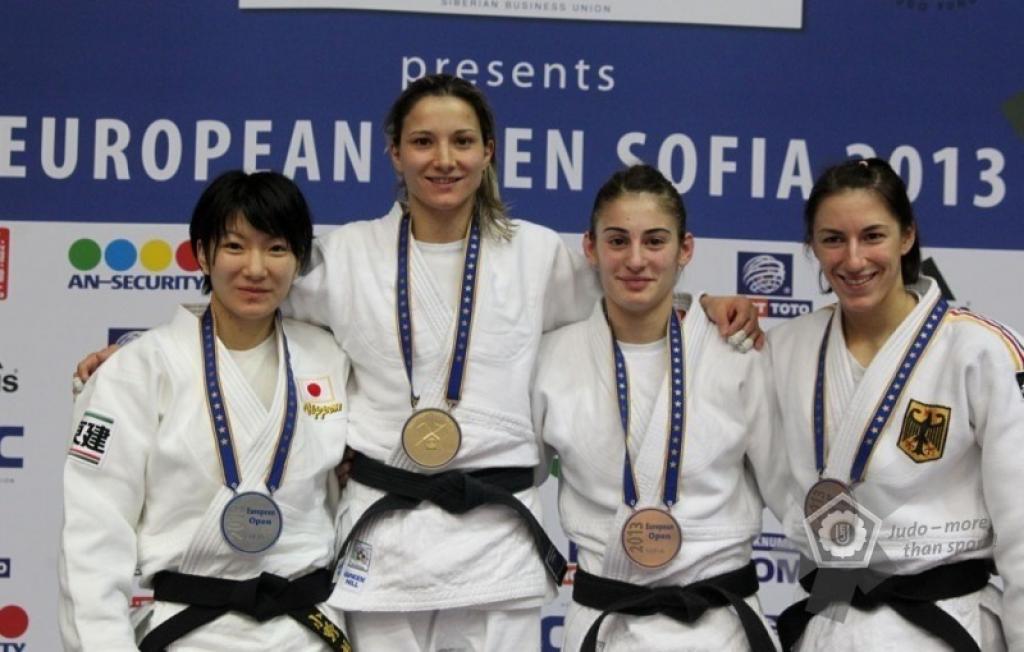 Japan was the expected and undisputed winner of the first day of the European Open  in Sofia. The young and talented Japanese team claimed three out of the four available titles in Sofia.

Highlight for Europe was the victory for Telma Monteiro who seems to be back after her debacle at the Olympic Games where she left London after one lost fight. In Sofia though the Portuguese super star proved to be a single level in her category U57kg. Monteiro, who is a four times and the reigning European Champion defeated four opponents. In the final 20-year old Shoko Ono (JPN) lost the bout by ippon. Kosovarian Krasiniqi, Loredana Ohai (ROU) and Vesna Dzukic (SLO) were earlier victims of Monteiro. Youngster Loredana Ohai (ROU) did relatively well against the experienced Portuguese hope.

Traditionally the super lightweight division U48kg is Japanese territory. At the major tournaments and also at the first European Open for women in 2013. In Sofia an All Japan final was the case U48kg with Riho Okamoto as winner. The Japanese Asian Junior Champion defeated her country woman Tamami Yamazaki, the winner of the Korean Open, end December.

Maryna Chernyak (UKR) and Laetitia Payet (FRA) won the bronze. Chernyak (half of a twin) did well today and won a tough poule but lost against Okamoto. Payet came back in the repechage and defeated two Turkish women after winning against European U23 Champion Dilara Lokmanhekim in the poule, three in a row, resulting in bronze.

Heylen who defeated European Champion Andreea Chitu (ROU) in a dramatic bout at the Olympic Games was left with empty hands in Sofia as well. Also Chitu ended as fifth addressing the impressive strong field in Sofia.

This field was more than excellent in the category U63kg, won by Miku Tashiro. The Japanese was 2009 Cadet World Champion and 2010 Junior World Champ and one of the main outsiders to win in Sofia. But in a poule with Dutch Anicka van Emden, Slovenian European U23 Champion Nina Milosevic, anything could happen. But the tiny Japanese defeated Milosevic in the quarter final who was so kind to defeat world class athlete Van Emden.

Tina Trstenjak who was also coached by Olympic Champion Urska Zolnir took silver after defeating three opponents, not as deadly as in poule A, but a final position for Trstenjak wasn’t a surprise. The Slovenian Champion of 2013, even U70kg, won event after event in 2012 and continuous her challenge to become the successor of her successful coach.

The strategical skills of the Slovenian team are highly efficient with the new rules, but even before the new rules the tactics of the impressive Slovenian women paid out.

Watch all photos of the first day: