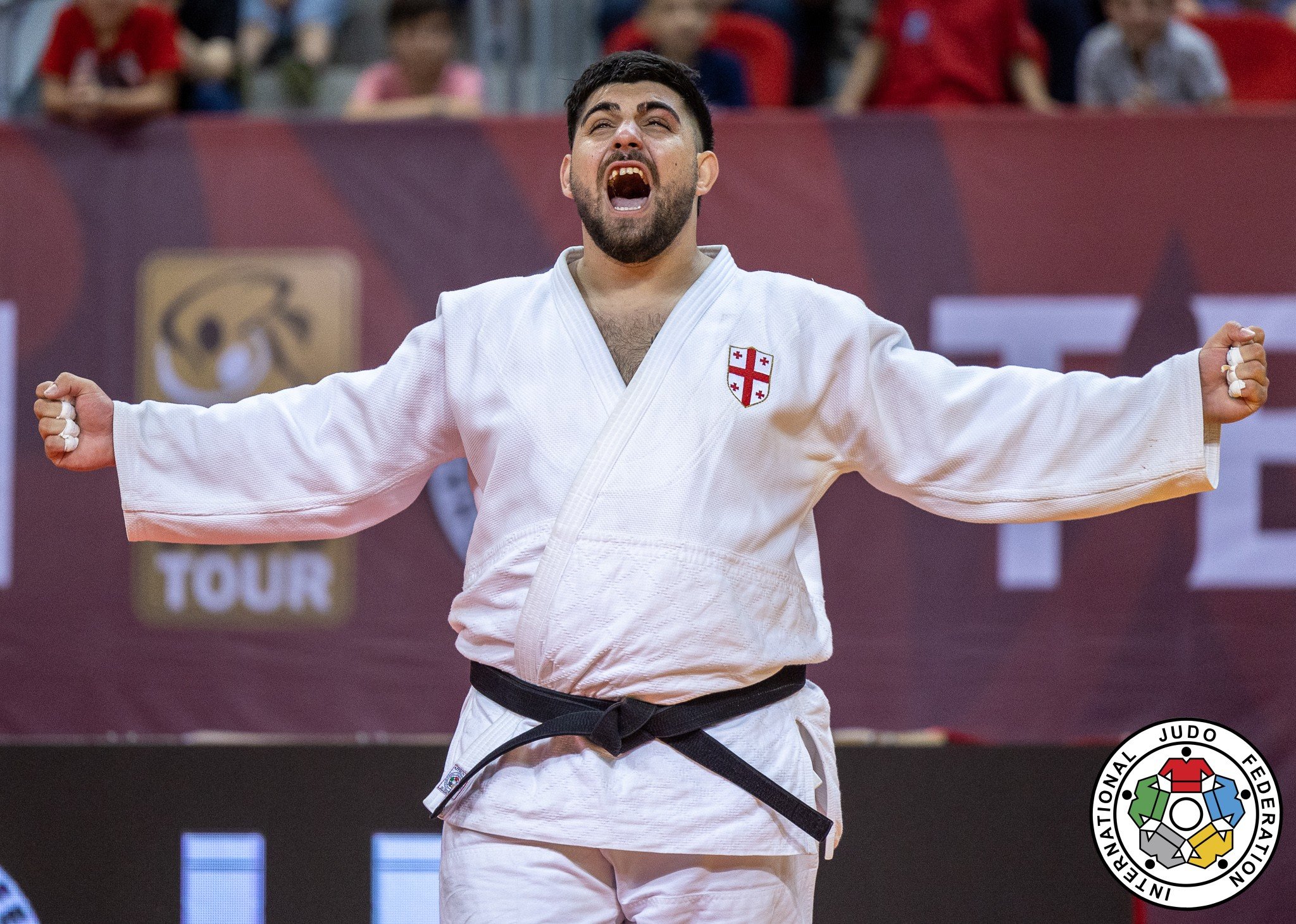 There were waves of Georgian flags sailing through the crowds on the final day of the Tbilisi Grand Slam and the support undoubtedly helped their men on to claim the three gold medals available. Beka GVINIASHVILI, Onise SANEBLIDZE and Gela ZAALISHVILI executed their very best judo and took their places on top of the podium.

Zaalishvili is certainly the greatest showman as he rallied the crowd on numerous occasions today and the whole tournament ended on a high as he went toe to toe with Alisher YUSUPOV (UZB). Sometimes we see a swift change in tempo in the +100kg category that makes the difference, but with this pair it was a slow start and a two-time clinch that brought about the scores. As Zaalishvili claimed the first score, he also owned two shidos and needed to be careful, but he didn’t waste this opportunity, closing the gap and using tremendous strength and momentum, sent Yusufov soaring to the ground, and the crowd soaring to the rafters.

The style of Anna Maria WAGNER (GER) is certainly something different to that of the Georgian men, and her ability to execute the most dynamic of uchi matas is not lost on us. With the still images alone she is an impressive individual and has the back patch to prove it. Her day may not have been easy but she was dominant as the number one seed and a waza ari was enough to defeat opponent Mayra AGUIAR (BRA) in the final.

Following the Olympic Games Wagner expressed the difficulties many athletes face, the mental trouble that coincides with success and achieving your dream, the struggle to pick yourself back up and form a new goal after putting the body through so much, but today she seemed strong on all fronts. We are approaching the qualification period this month and so many are realigning to be back in the right frame of mind.

I am very happy with this day, there were some really hard fights so after the final I’m feeling proud of myself. I feel like I’m back in the game but not back back like I was last year, I still have a lot of work to do and more training and though the result was good I still don’t feel great.

For me, the uchi mata was a great feeling today, it was strange because in training it just wasn’t working. I didn’t feel like I had the power to do it or the strength but it turned out to be my throw of the day!

Mental strength is something we can certainly claim is a trait of Beka GVINIASHVILI (GEO). He has fought in multiple weight categories, missed out on critical medals, only to return to his ‘natural’ weight and be bypassed by a younger talent for the Tokyo Olympics. Yet today we saw only a champion. After each contest he came out stronger and more determined, even having to defeat team mate Giorgi PAPUNASHVILI in the semi final. However his most impressive performance, and not regarding technique as in his preliminaries we saw his opponents fly, but in his relentless ambition to take the gold medal.

Gviniashvili was motivated, dominating and barely came up for breath as he constantly attacked TOTH Krisztian (HUN). Inevitably, Toth picked up two shidos whilst Gviniashvili continued to bombard the Hungarian, despite being up with a waza ari score as a result of ashi waza, he just did not stop. With only 35 seconds left, Toth picked up his third and final shido, ending the final and Gviniashvili finally relaxed, looking to his young family in the tribune.

Georgian fans are spoiled in many of their categories, but in the instance of the -90kg weight, they have Olympic champion Lasha BEKAURI, current European champion, Luka MAISURADZE and now Gviniashvili steps in to steal the show in Tbilisi.

The tall Julia TOLOFUA (FRA) put her height and long legs to use in the +78kg category today, no one was able to escape her. In her first contest, the number one seed defeated the home favourite Sophio SOMKHISHVILI (GEO) in just under two minutes with uchi mata, her first of the day. Again we saw this against Marit KAMPS (NED) as she scored waza ari, transitioning in to osae komi to secure her place in the final.

What started slow, with the finalists Tolofua and Nihel CHEIKH ROUHOU (TUN) getting their bearings, quickly changed with an ashi waza attempt from the French. Though it knocked Cheikh Rouhou off her feet, there was no score. This didn’t dishearten Tolofua though and she kept on the offensive, wearing her opponent down and finally, with 12 seconds left of the contest, threw with uchi mata for waza ari and taking the second gold medal for her team.

Though no less of a story, Saneblidze barely gave us time for any kind of finale analysis as he swiped the -100kg gold medal in only 21 seconds. It was sheer delight and potential surprise for him, at least that was what his face portrayed. He simply stood hands on head, clearly more than satisfied that despite numerous attempts, the 23 year-old took his first grand slam gold.

Many assume, and in most cases are correct in their thinking, that when facing a team mate the contest will feel like time has slowed, knowing each other well can be a curse but in this situation, it was a blessing. For Saneblidze, similar styles made for a reactionary contest, and a quick one at that.

In the end it was a clean sweep for Europe on day 3 in Tbilisi and concluding the event, Georgia finished top of the table (5,4,5) followed by France (2,-,4) and then the Republic of Korea with two gold medals.