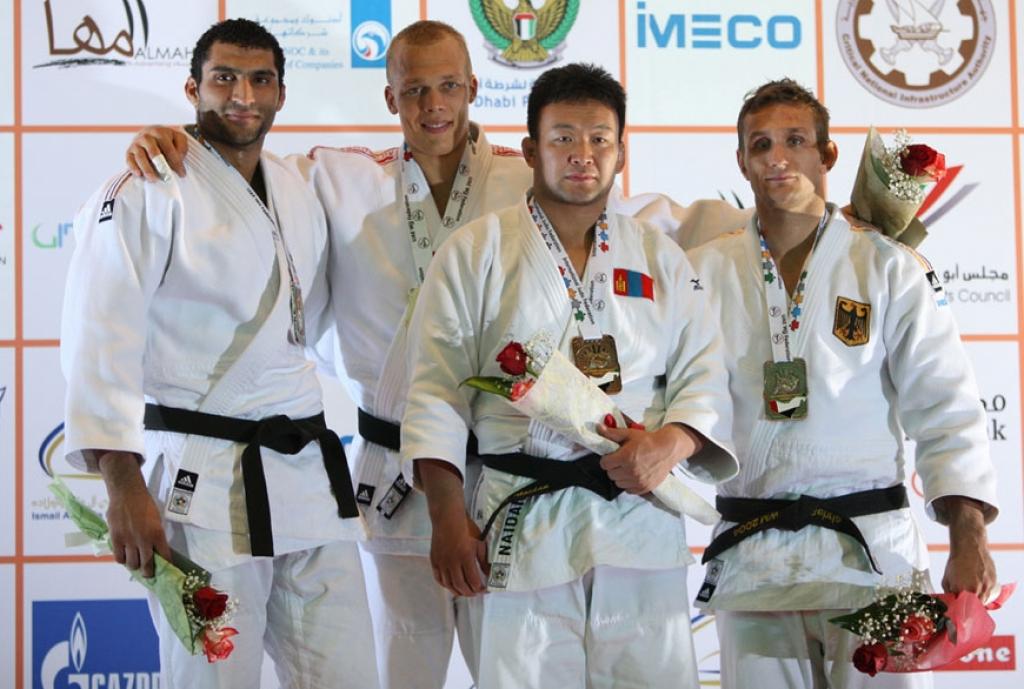 Varlam Liparteliani has won the category U90kg of the Grand Prix of Abu Dhabi. The Georgian fighter was happy to win an important event again. He won for the last time in February 2010 in Prague, but today he was able to defeat Marcus Nyman of Sweden in the final. This season has been a bit unfortunate for the 2008 World Junior Champion. At the IJF Masters in January he became fifth, as well in Paris and Düsseldorf. At the European Championships he finally won a medal, but bronze in Istanbul. At the last World Championships in Paris he met with Daiki Nishiyama in the first round and lost against the runner-up of the Worlds.

Today Nishiyama defeated five opponents. Highest seeded Elkhan Mammadov (AZE-4) lost to Song Dae-Nam of Korea. He finished with bronze after losing to Liparteliani who met with Nyman in the final. The Swede won the Grand Prix of Düsseldorf and was able to defeat Elnur Mammadli who competed in a new category U90kg today. Mammadli won bronze, Nyman lost his second final this year. He lost in Miami to Hugo Pessanha but Nyman took revenge for that loss in the quarter final. For Georgia it was the third final this event.

Henk Grol is back on track winning the gold U100kg. The Dutchman defeated the Egyptian Ramadan Darwish in the final after he benefit from a slippery move by Darwish. Grol was facing a bad relation with the major tournaments as he lost in an early stage at the World Championships in Paris in August and finished with empty hands at the European Championships. At the IJF Masters in Baku he came back with gold and today he improved his confidence by winning over five rivals. The highest seeded, Russian Samoylovich lost to Olympic Champion Naidan in the quarter final. Naidan was defeated by Darwish.

In the heavyweight category Kim Min-Sung (KOR) took the best candy. Kim defeated Dutch surprise Luuk Verbij in the final. The Netherlands qualified for three finals today, the last time this was in Moscow in 2010 finishing with three silver medals. Grol at least won gold this time.
The tall Verbij however could look back to a good tournament where he was able to beat rivals he had beaten before. A confirmation of his strength for the 25-year old athlete who is in a competition with Grim Vuijsters to qualify for the Games. In the semi final Verbij defeated the highest seeded Islam El Shehaby (EGY-2). Kim was victorious over Zviad Khanjialashvili (GEO) in the semi final and Alexandr Mikhailin (RUS) in the quarter final.
Kim recently won the IJF Chinggis Khan World Cup in Ulaanbaatar, won bronze in the Paris worlds, and won silver in Abu Dhabi in April at the Asian Championships. Kim is one of the candidates to challenge Teddy Riner for the Open World title, although that head2head score is still 7-0 to Riner. Still a good warm up for the World Open in Tyumen.

The women’s U78kg title was for Hungary. For Hungary it’s the fifth victory of this year, and equals the score of last year. Four out of ten titles are won by Abigel Joo who was today’s strongest. Joo defeated 2009 World Champion Marhinde Verkerk (NED) for a fourth time since the European Championships final in 2010, which was the last joint final.
Despite the 17 participants the field was pretty good and Joo defeated four serious opponents. Korean Jeong Gyeong-Min finished with bronze, Japanese Ruiko Sato was defeated by Verkerk.

The women’s heavyweight category was won by Russia. Elena Ivashchenko was victorious over Ketty Mathe of France in the final of the women’s heavyweights. She didn’t meet her rival Dongouzashvili this time. 10 days ago both met at the World Cup final in Minsk and Dongouzashvili won. Today she finished fifth and Ivashchenko took the gold defeating four opponents.
It was her eighth World Cup/Prand Prix victory although Ivashchenko was three times European Champion as well. Both judoka though have troubles winning the big international prizes.
For Russian it was the first gold medal this event, one bronze by Ivan Vorobiev and 5 fifth places. The Netherlands was the best performing European nation with gold. Four silver medals and bronze. Japan won the medal tally winning four categories.