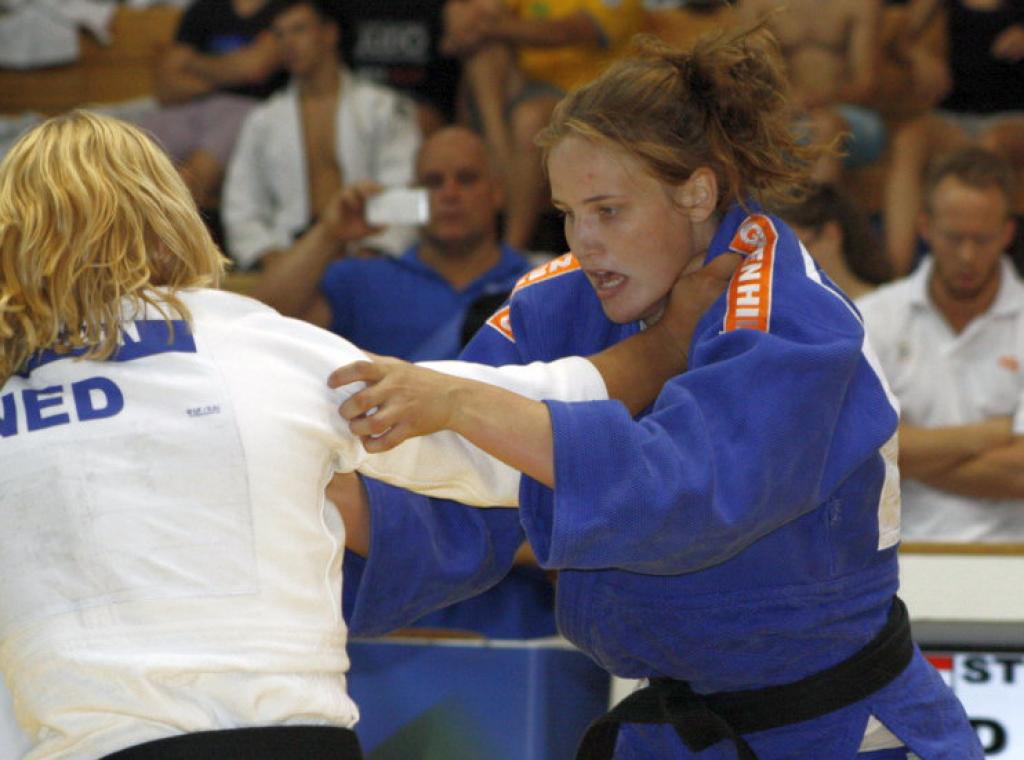 At the second day of the European Cup for Juniors in Paks The Netherlands claimed the jackpot. Three Dutch young ladies won a gold medal in judo city Paks. Do Velema won the category U63kg, it was her third victory of the season. On Sunday she defeated Austrian Magdalena Krssakova in the final. Iris Iwema of the Netherlands won bronze after she won two fights in the repechage. Also bronze for Diana Dzhigaros (RUS).

Evelien Berndsen (NED) surprisingly won the category U70kg, a division usually ruled by strong Sanne van Dijke. This time it was Berndsen, the number three of her nation who won this strong event. Valeria Ferrari, Italy’s silver medallist is also Italian national runner-up. Surprise of the day was Berndsen’s victory over mega talent Barbara Matic (CRO) in the quarter final, but Matic fought back and won bronze after all. Emilie Sook of Denmark won her third medal of the year, this time bronze which was the only missing colour this season.

Babette van Aggelen is developing well U78kg and improved from a 7th place in her first event of the year, to 5th, 3rd and Sunday’s gold medal. Her opponent was Karen Stevenson who already won a medal at a Senior European Open, which underlines the strength of the Dutch female juniors in this moment. A good milestone of confidence for the forthcoming Junior World Championships.

Milica Zabic won the gold medal in the plus category. The Serbian fighter defeated Anzhela Gasparyan of Russia in the final and another Russian, Anastasia Trapeznikova, in the semi final. Trapeznikova lost her last two bouts as Kara Kubra (TUR) won the bronze as well as British Jodie Myers.

Host Nation Hungary cheered for the victory of Akos Bartha. He won a gold medal in the category U55kg against Yavuz Besel of Turkey. Richard Gard (HUN) won the second medal for Hungary and was on the same level on the podium as Jasmin Kajic (SRB).

Carmine di Loreto of Italy improved his medal of last year when he lost the final. Now he was able to claim the first place after he defeated Dutch Jamie Raijmakers,also for him a good position in Paks. Mertcan Akcay (TUR) and Denis Jurakic (SRB) took the bronze.

A second gold medal for Italy was captured by Matteo Piras. It was a good confirmation that his form of April when he won a gold medal in Coimbra is still in order with the expectations for Ljubljana’s World Championships. Also nice to see the development that Italy has very strong cadets U50kg and U55kg and two young men in the junior category in the next weight categories U60kg and U66kg.

Piras defeated Ilija Ciganovic in the final, the Serbian won gold in Leibnitz which made him favourite in advance, but Piras performed well and kept the Serbian off the gold. Vladyslav Didenko won bronze for Ukraine as well as his compatriot Dmytro Raskin.

Gold for Ukraine though U73kg when Artur Sarkisyan defeated Antonio Esposito, another Italian, in the final. Igor Potparic of Slovenia is warming up for Ljubljana with bronze and Vlad Visan added a the third medal in Paks for Romania.

The Netherlands won the medal table due to its eruption of female talent on the second day, on the first day the Dutch had already won two good gold medals in the men’s division.

Russia and The Netherlands are the most successful nations in the junior category this season winning 24 and 14 gold medals so far.

Next stop: Wroclaw, next week.