The Netherlands have pick start at EYOF opening day of judo 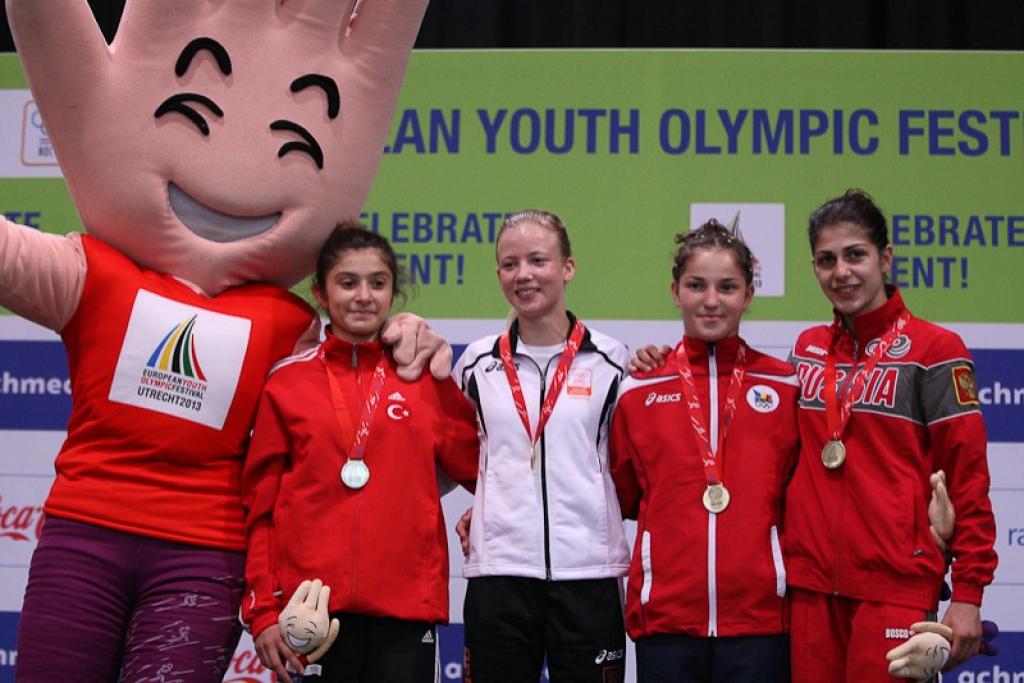 Host Nation The Netherlands is leading the medal table after day one of the European Youth Olympic Festival in Utrecht. The Netherlands started the tournament well with a victory in the weight category U44kg by Amber Gersjes. The tiny Dutch girls had won the European title U17 years last year in Montenegro (U40kg) and this year she claimed a bronze medal U18 years in Tallinn in a new category U44kg. Today she defeated Rabia Senyayla of Turkey in the final, Senyayla lost her second final in a row. Two weeks ago in Tallinn the European Cadet Championships were held and the Turkish lightweight took the silver behind Russian Anastasia Turcheva.

Gersjes, the Dutch flagbearer, finished first in front of many high class sports athletes and administrators. Among the distinguished guests EYOD director Pieter Van den Hoogenband, an Olympic Champion in Swimming and participants of the EYOF in the early days.

Also Patrick Hickey, President of the European Olympic Committee had great interest to witness the judo event as he used to be a judoka himself. Nonetheless today’s joy was about the athletes and Gersjes was happy to take the gold medal in front of her parents and friends. For the gold medal she needed to defeat four athletes. Romanian Camelia Ionita was the tough opponent in the semi final and she won the bronze medal afterall as well as Sofya Matatova (RUS).

Hungarian Reka Pupp won the gold medal U44kg. Pupp is one of the strongest in this division. She had to overcome Betina Temelkova of Bulgaria in the final. Marta Gonzalez Calva of Spain won the bronze as well as Andreja Leski of Slovenia.

In the men’s light weight categories, two Italian young men were favourite due to her European titles in Tallinn. But the gold medals went to Azerbaijan and Georgia instead. U50kg Elnur Abbasev (AZE) defeated strong Belgian judoka Jorre Verstraeten. He showed his skills in all his matches but Abbasev was latterly a stage too high. Dutch Mathijs van Harten won a bronze medal, Oguzhan Karaca won bronze for Turkey.

Erekle Arkhozashvili of Georgia defeated favourite Elios Manzi in the quarter final in an exciting match. Arkhozashvili got the confidence and also defeated homeplayer Tornike Tsjkadoea who won the  bronze medal. Arkhozashvili proceeded in his conquest for gold and defeated the again surprising Peter Miles of Great Britain in the final. Miles won bronze two weeks ago in Tallinn’s Europeans and now reached the final when he defeated European runner-up Ilkin Babazada (AZE) in the semi.