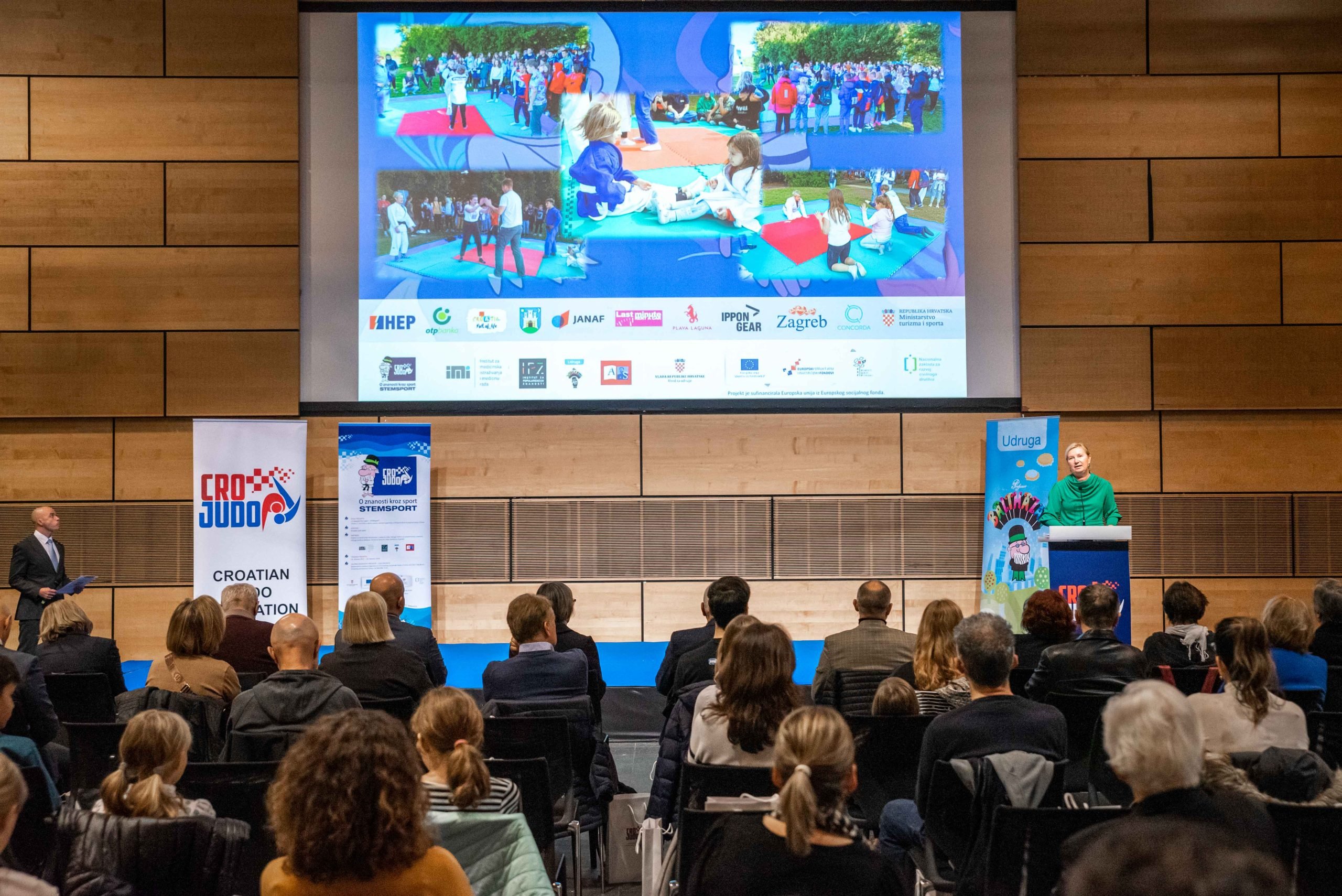 On the evening of 15th November , the introductory conference “On science through sport – STEMsport” was held in Zagreb’s “Mozaik Event Center” and the exclusive premiere of the new animated film from the Professor Balthazar series.

Professor Balthazar is a Croatian animated comedy series filmed from 1967 to 1978 in Zagreb film. To this day, the series remains the most successful project of the Zagreb Cartoon School. The father of Professor Balthazar’s character is Zlatko Grgić, and a team of 20 people participated in the entire project, including Ante Zaninović, Pavao Štalter, Boris Kolar, Milan Blažeković and Zlatko Bourek, with music by Tomica Simović. The friendly scientist, who solves the problems of his fellow citizens with the help of imagination and positive energy, was named after Pavao Štalter. The series became very popular, and it recorded a solid success in broadcasting abroad. The plot revolves around the unusual scientist Balthazar who, with the help of his inventions, makes the lives of other people in Balthazar-city easier.

The conference was opened by the president of the Croatian Judo Federation, Ph.D. Sanda Čorak:

“I am extremely glad to be able to greet everyone on behalf of the Croatian Judo Federation. In this year, we are still reminded of the exceptional competition results of Barbara Matić and Lara Cvjetko, but we also do not forget other activities. Ten years ago, we decided on common strategic guidelines that we would achieve not only a competitive result, but that we would be active in all directions and popularize judo as a sport in accordance with our capabilities. I hope you will enjoy tonight, you will hear from other speakers more about the project itself and the animated film, so I hope you will leave this conference with a slightly different mindset that in fact sport and science are not as far apart as it might seem at first glance.” – President Čorak said.

“Association Professor Balthazar was founded in 2010 with the aim of preserving the image and works of Professor Balthazar as an authentic Croatian cultural heritage. Promotion of innovation, creativity, entrepreneurship, non-violent problem solving, ecology, popularization of science are values ​​that have been read from cartoons about Professor Balthazar for generations. These values ​​defined the decision that the basic activities carried out by the Association take place within the framework of non-institutional education.”

Before the long-awaited premiere of the cartoon Professor Balthazar – Virtues from the Deep began, we had the opportunity to learn more about the project “About science through sport – STEMsport”, and Romana KEREP, the head of the EU project, told us more about everything.

“I am very happy to be able to work on a project like this, and my role is to present the whole project here and what it is really about. STEM is a set of disciplines that belong to science, primarily natural sciences, new technologies, engineering and mathematics. Usually it sounds “dry”, quite boring, and even a bit incomprehensible to you all at school, however, when someone demonstrates something interesting to you through sports that you can try yourself, for example some physical size like technical performance or balance, then something of that physics remains for us. in the ears, that is, it is easier to remember. STEM is a fundamental ingredient in the development of modern society for essential processes such as digitialization and the modern economy. In order to explain just a little how important this all is, I will just say that for the index of development in the next twenty years, scientists predict that it will accelerate by as much as twenty times.”

In 2005, the filming of new episodes of this already cult cartoon in Croatia began, and we are extremely honored that judo also found its place through the character of Professor Balthazar.

Professor Balthazar was awarded the Silver Lion in Venice in 1969. In the same year, he received a silver Hugo award in Chicago, and an award at the festival in Trieste. In 1970, he was awarded in Romania and San Sebastian. Dino KRPAN, director and screenwriter of “Virtue from the Deep”, told us more about the cartoon itself:

“One of the roles I performed, that is, the honor of being the director and screenwriter of the new animated film by Professor Balthazar, which is one of the valuable things of the cultural heritage of Croatia, and for that I have to thank ingenious sources, authors such as Zlatko Grgić, Zlatko Bourek, Ante Zaninović, Tomica Simović with his wonderful music and Boris Kolar who supported this project in some way. I must also thank the Croatian Judo Federation, which supported the project as an innovative opportunity to do it through an animated film and in that one creative way to reach the youngest.”

The well-known IJF Judo Grand Prix, a tournament from the World Judo Tour series, was held in Zagreb for the ninth time in a row. The tournament that was scored for the Olympic Games in Rio de Janeiro in 2016, Tokyo in 2020 and now in the new Olympic cycle, i.e. for the upcoming Games in Paris in 2024. During the tournament itself, a humanitarian action was held, and Senka Klarić, manager of the “Vaša pošta” Foundation, explained more about the cooperation:

“It is a great honor for me to tell at the end of this conference how the Croatian Judo Federation is all involved through the “Vaša pošta” Foundation. The Foundation for Helping Children Without Adequate Parental Care was founded in 2010. The mission of the “Vaša pošta” Foundation is to promote corporate social responsibility as a contribution to creating a better and more humane world for children without adequate parental care.

The goal is to make it easier for children placed in homes to start an independent life by finding a donor for each child (resident) who will pay for a life insurance policy in the child’s name in the amount of 6,000 euros in kuna equivalent.”

In addition to the fact that the Croatian Judo Federation was involved in an earlier project, it didn’t take long for them to call again with a request to contact all the children’s homes in the Republic of Croatia, of which there are more than 25, and to check how many of these children train in judo with the intention of gives the children an additional sense of security that should actually be provided by their primary family, which unfortunately is unable to do so,” explained Klarić.

And now I would like to ask Ana Krauthacker and Maja Vidaković to join us on stage and say something about this commendable humanitarian action.”

We had two big competitions this year, the European Cadet Championship in Poreč and the IJF Grand Prix Zagreb, all the revenue from the tickets was donated to the insurance policy for young people, for their future life, to make life at least a little easier for them. – said Ana Krauthacker.

“Good evening everyone, I would like to take this opportunity to thank everyone, especially the Croatian Judo Federation and the Foundation for enabling me to have a safer life when leaving home, thank you!” – added Maja Vidaković at the end.