THE RUSSIAN MINISTRY OF INTERIOR TEAM REINSTATES THEIR STATUS

XII. International Tournament for Police, Army and Other Forces 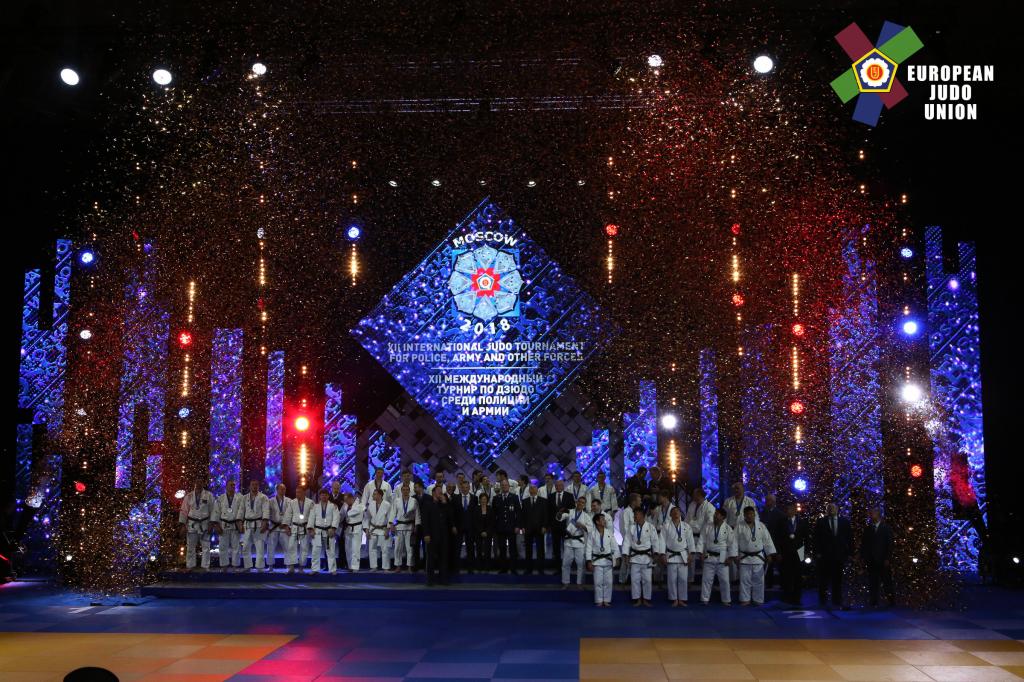 The XII. International Judo Tournament for Army, Police and Other Forces took place today at one of the 1980 Moscow Olympic Games venue, called Izmailovo Sports Palace. This is a team event, dedicated to those officers who lost their lives in the line of duty. 14 teams (7 Russian and 7 Foreigner) from 8 different countries were competing to pay tribute to their fellow officers.

Organisers of the Tournament were the European Judo Union, the International Judo Fund, the National Veteran Judo Union, the Russian Judo Federation, the All-Russian Sports Society “Dynamo” and the “Voluntary Society of Assistance to Army, Air Force and Navy of Russia”. The competition was held with support of the Department of Sports and Tourism of Moscow city. The Organising Committee began the day with a flower-laying ceremony at the monument “Grateful Russia – to law enforcement officers killed in line of duty” at Trubnaya square.

The following officials took part in the ceremony: The President of the European Judo Union, Sergey Soloveychik; Members of the EJU Military and Police Commission; Team Officials of International Participating Teams; Russian Organisers by the State Secretary; Deputy the Minister of Internal Affairs of the Russian Federation, Igor Zubov; the Vice Chairman of the All-Russian Sports Society “Dynamo”; the Major General of the Internal Service, Vladimir Gazizov and the President of the European Police Sports Union (USPE), Mr. Luc Smeyers. Mr. Zubov thanked all officials for coming to Russia and honouring the memory of our officers who lost their lives in the line of duty.

According to tradition, one half of the draw was occupied by different Russian forces whilst the other half was booked up for all foreigner forces. On the lower half, nine times winner, Team of Ministry of Interior of Russian Federation (MIA/MVD) stood up to expectations and for the 11th time reached the final stage. On route, they began with a bye and soon after defeated the Team of Federal Tax Service of Russian Federation with a 4:1 win. The semi-final saw MVD facing Team of Federal National Guard Troops Service of Russian Federation (VNG). Although the outcome was rather tight (3:2), MVD still managed to progress to the final where you would expect to have the Japanese team for the regular clash of thrones. Well, it was not the case this year.

An ice-breaking performance was delivered by the Belarusian team who was practically on fire throughout the event. The team had an early entry in the morning when facing the Czech Republic Police Team, whom they overcame by a 4:1 victory. The quarter-final saw the German Police Team giving their best shots, however, they also had to bow off with a 4:1 defeat. One of the most exciting match up was the semi-final on the upper half of the draw as the current champion, Japanese Police Force, stood against blazed up Belarusians. Last year, the teams met at the quarter final stage where the Belarusian team already alarmed the Japanese force with a tensed match up. Today’s meeting was again ecstatic with the same outcome of 3:2, but this time, the Belarusian team bowed off in celebration. The decision-making score was delivered by Yury RYBAK, who spoke about his feelings afterwards;

“Prior to my contests in the semi-final I had mixed thoughts and feelings inside. On the one hand I was hungry for victory and on the other hand I had healthy anger in me as we lost last year, so this was our opportunity to change it around. We were sure to defeat Japan this year we just did not know that it will come down to the last contest.”

The final saw the unexpected, BLR vs MVD. The first contest was between Siarhei NOVIKAU and Vladimir LEONTEV. Both athletes fired out with attacks right away, however, an incorrect posture from Novikau allowed Leontev to skip in for an uchi-mata, gaining an immediate win for the Russian team. The second contest was one of the shortest of all as Roman BEKULOV shined with his newaza skills against Aliaksandr MARUDAU within 22 seconds. The pressure was all on Siarhei ZHDAN as he faced Aleksey ASTAFEV for a crucial point to keep the hopes of gold for the Belarusian team. The clear contest time ended with a few penalties here and there but the score came from Astafev when throwing his opponent during extra time; securing additional golden memories for the Team of Ministry of Interior of Russian Federation. At the end, with surplus success from Samir GUCHAPSHEV and Artur KHAPTSEV, the outcome of the final was a clean sweep. Following the medal ceremony, member of the MVD team, Raman Kholopov voiced his thoughts about today;

“Although we saw the Belarusian team defeating the Japanese team during the semi-finals, we were sure to win today in the final. The team was strong and well prepared. Everything worked well today, our team and the support was perfect. We are happy to be back on the throne.”

After the final clash, Rybak (BLR) also explained further; “The feeling from our team was good. We were ready for the final, but this is the beauty of the sport, you never know what is going to happen. Today the success was in the Russian team so maybe next year we can do better and finish on top.”

“We won three bronze medals in previous years. We were really happy to break the regime and make it to the final. Overall, we are certainly satisfied with the performance of our team and it was nice to face our friends and colleagues, the Russian team, in the final.”

The two bronze medal winner teams are the Japanese Police Force and the Team of Federal National Guard Troops Service of Russian Federation. Congratulations to all participants.