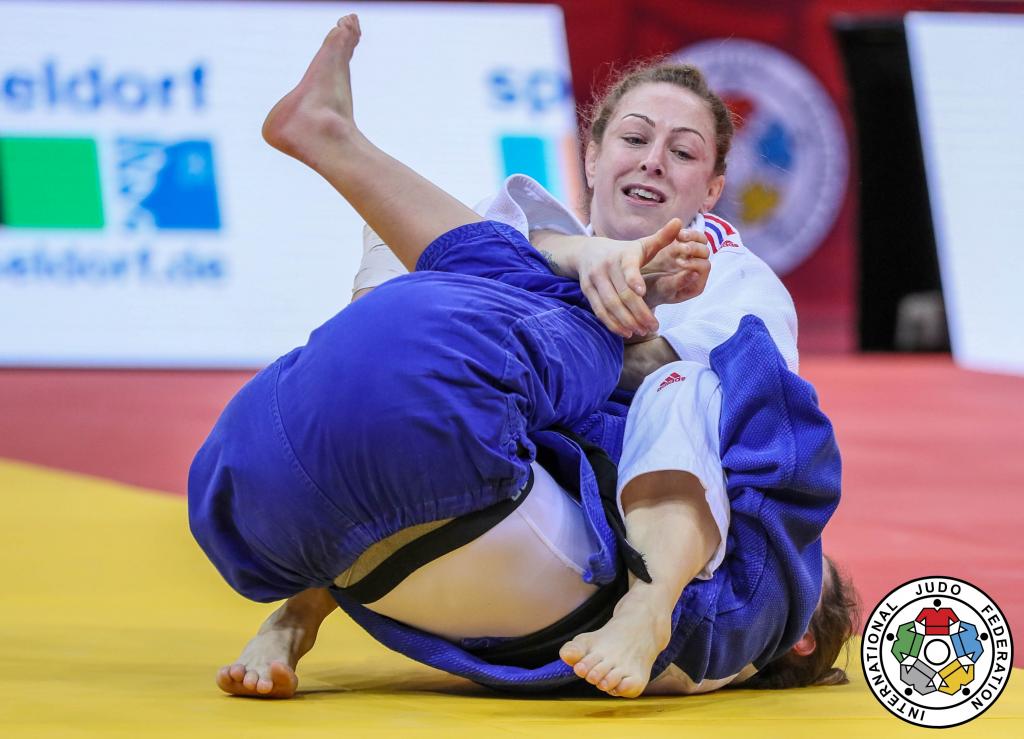 Five wins by ippon is usually the signal that a judoka has had an exceptionally successful day. And so it proved for Sally CONWAY (GBR) as she collected the gold medal in the -70kg category on the second day of competition at the Dusseldorf Grand Slam. With her highly effective newaza to the fore, Conway looked sharp and combative, impenetrable in defence (she did not give up a single score) and disciplined (she did not collect a single shido).

When asked about winning her third Grand Slam Conway said rather shyly, “I am not really one to count how many medals I’ve won. But I’m glad to know it is three.” She went on to say,

“I prepare the same for all tournaments, whether it is a Grand Prix, Grand Slam or an Olympic Games. Sometimes things work and sometimes they don’t. I am glad that things worked today. It’s not that I focus on any particular player, but today I managed to defeat Maria BERNABEU (ESP) to whom I’d lost recently.”

With regard to the strength of the category Conway said,

“It would be difficult to single out just one or two in what is an extremely difficult category. For example, the young Brazilian [Ellen SANTANA] who defeated some tough fighters to take a bronze medal. But the fact is that they are all dangerous and all capable of medal winning performances. These are the sort of challenges that you have to meet if you want to compete at Olympic level. It took a little while after Rio 2016 to feel that same drive. But I am focused on Tokyo 2020 now.”

With a full IJF World Tour calendar to choose from Conway singled out a few upcoming events,

“I’ll be going to the Grand Slam in Ekaterinburg next. Thereafter I’ll be going off to train in Japan. I love it out there. The food, the people. I really look forward to it.” 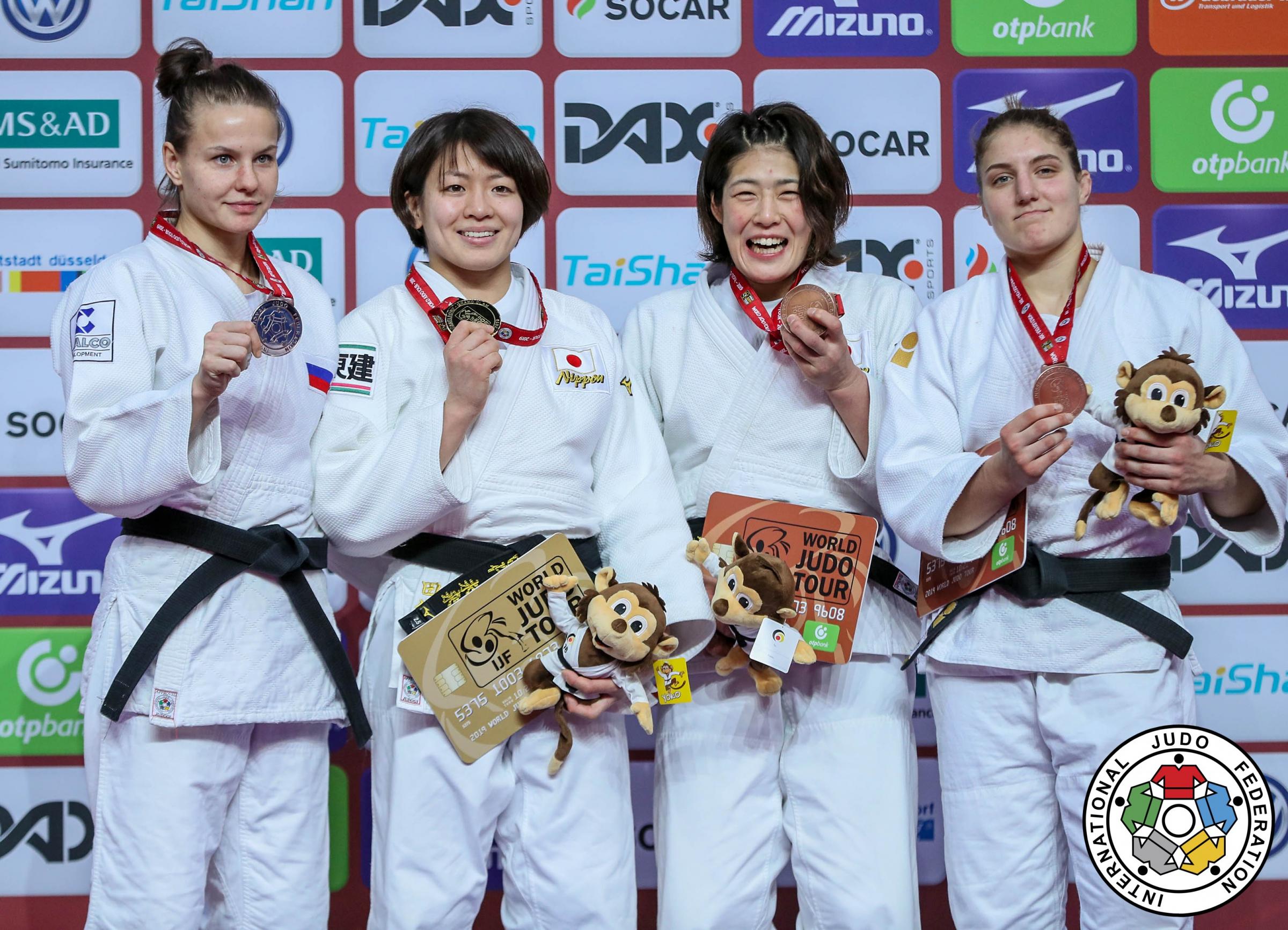 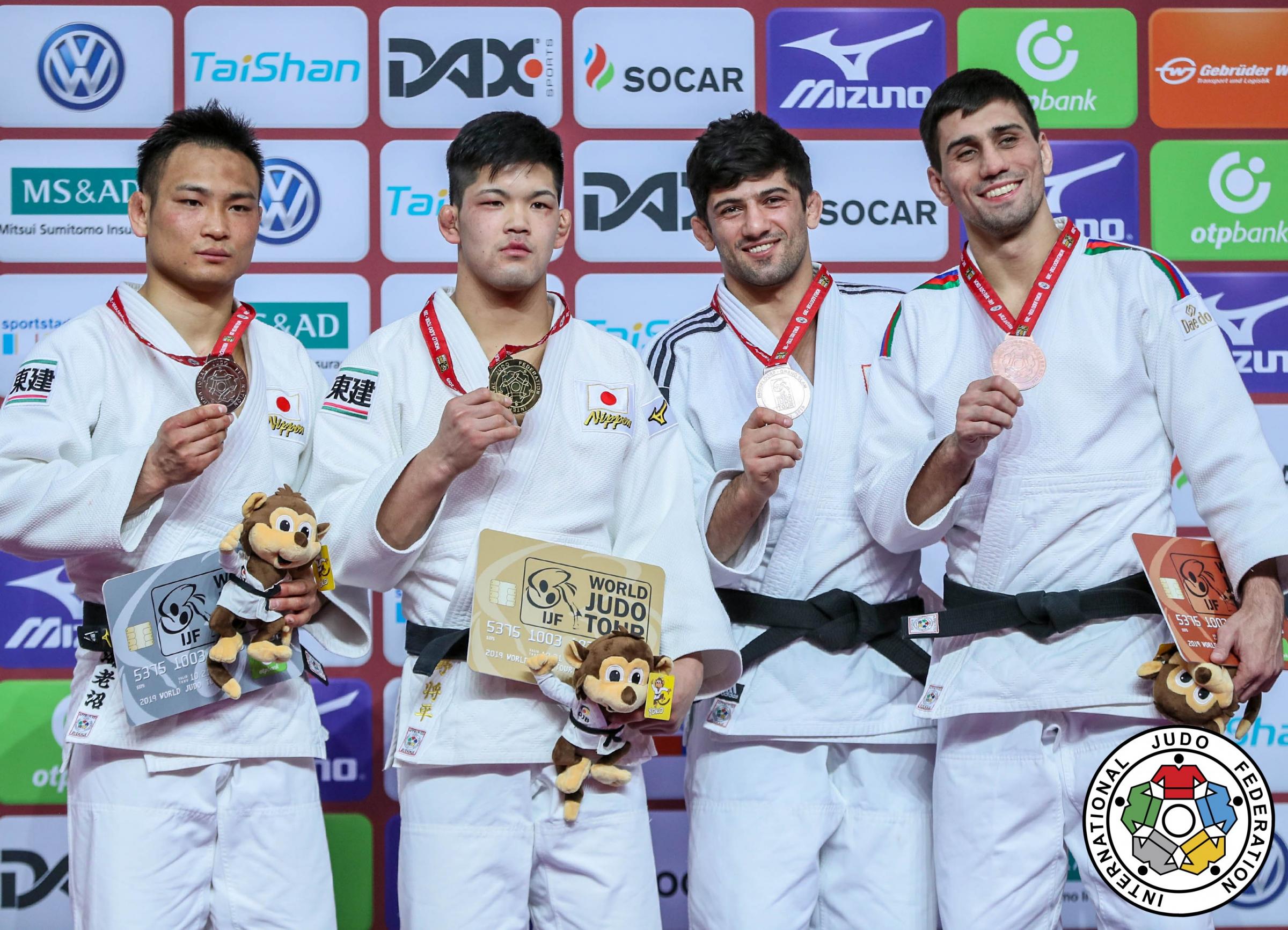 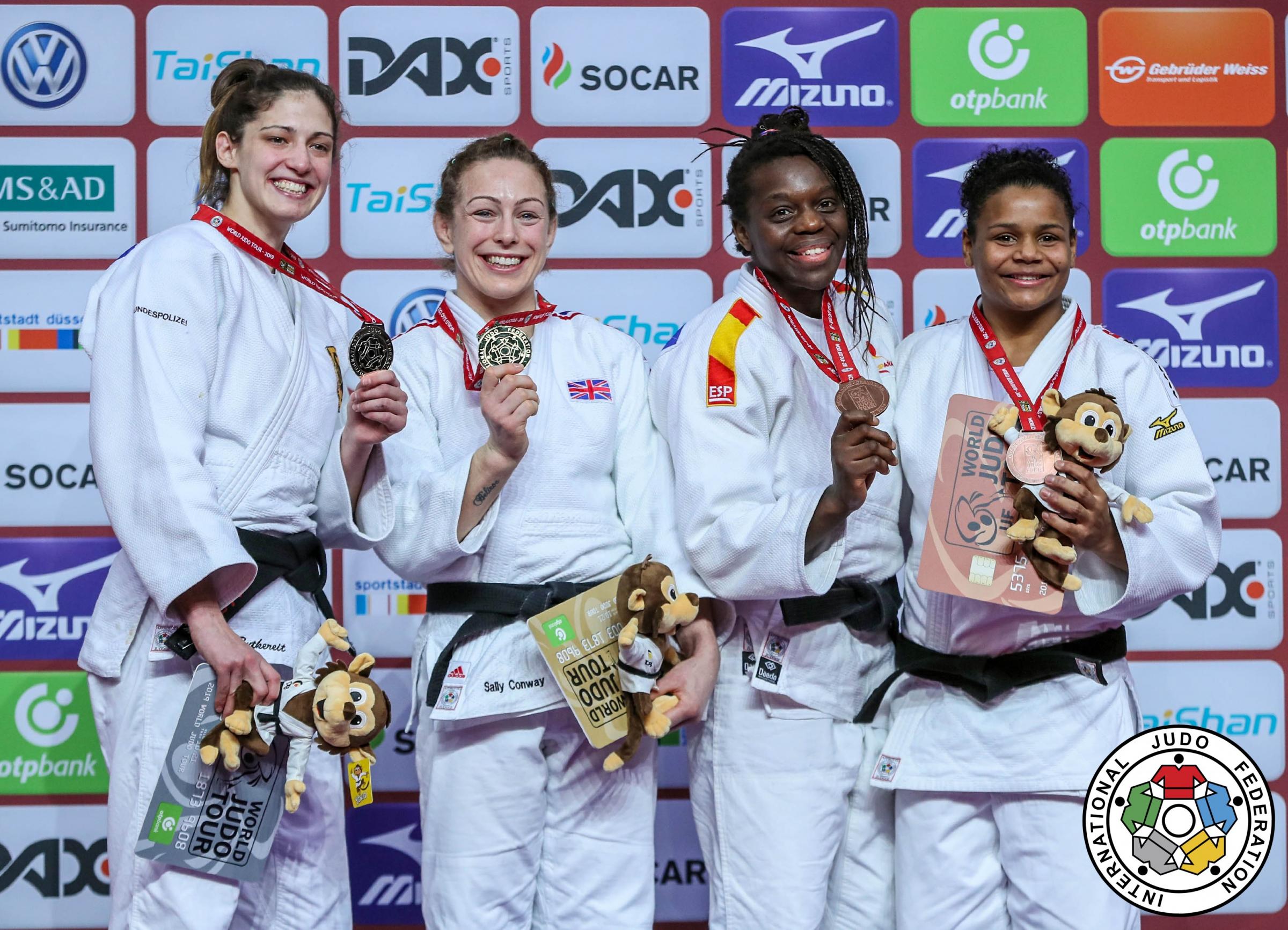 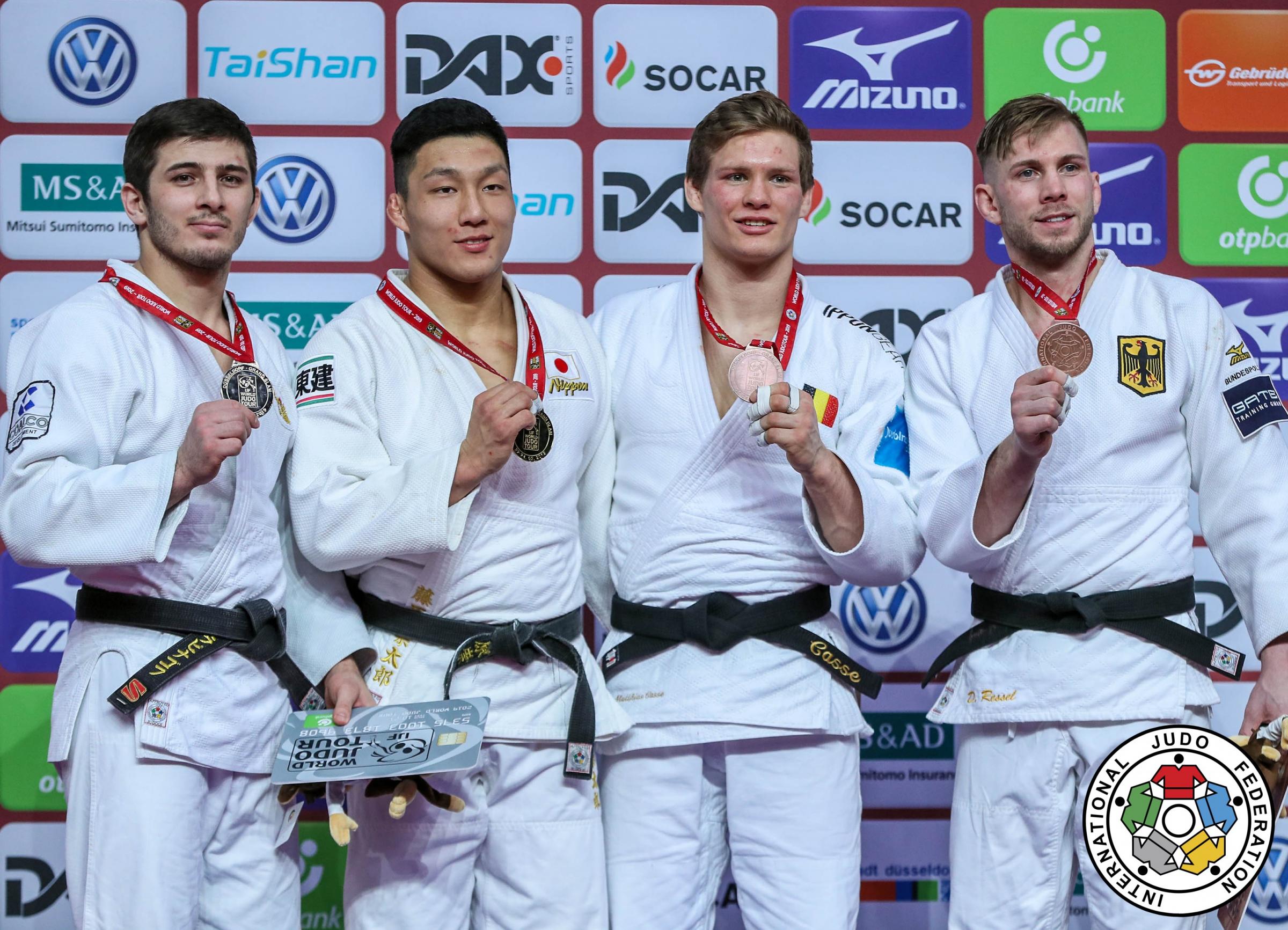 In the -63kg category the gold medal was won by TASHIRO Miku JPN when in the final she defeated Daria DAVYDOVA (RUS). The bronze medals were won by Andreja LESKI (SLO) and DOI Masako (JPN).

In the -70kg category the gold medal was won by Sally CONWAY (GBR) when in the final she defeated Miriam BUTKEREIT (GER). The bronze medals were won by Maria BERNABEU (ESP) and Ellen SANTANA (BRA).

In the -73kg category the gold medal was won by ONO Shohei (JPN) when in the final he defeated EBINUMA Masashi (JPN). The bronze medals were won by Lasha SHAVDATUASHVILI (GEO) and Rustam ORUJOV (AZE).

In the -81kg category the gold medal was won by FUJIWARA Sotaro (JPN) when in the final he defeated Aslan LAPINAGOV (RUS). The bronze medals were won by Matthias CASSE (BEL) and Dominic RESSEL (GER).