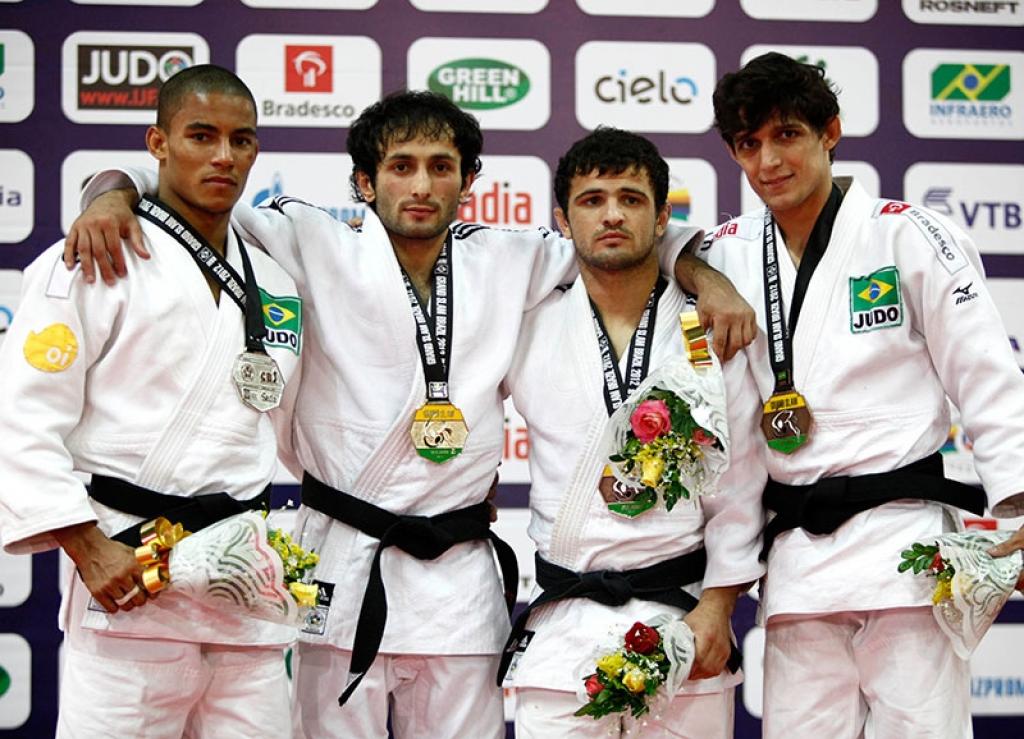 At the first day of the Grand Slam, just outside of Rio de Janeiro three Europeans collected the gold medals. U57kg in the women’s division Jovana Rogic won her weight category.

The first three minutes of the final between Jovana ROGIC (SRB) and Flavia RODRIGUES GOMES (BRA), passed by without any strong attack from both sides. Just before the last two minutes, ROGIC finally found a first tiny opportunity to score a yuko and to take the lead, which she kept until the end of the combat. After her bronze medal obtained two weeks ago in Moscow, the Serbian could celebrate her title.

Another European medal was captured by Ilse HEYLEN who won bronze U52kg. The top seeded athlete from Belgium, had no major difficulties to enter the final block of the women’s -52kg category, where she was opposed to the local fighter, Milena MENDES (BRA). Both athletes launched a simultaneous attack, which, for MENDES, begun with a ko-uchi-gari and ended with uchi-mata for ippon and a place in the final.

Amiran PAPINASHVILI (GEO) was awaited in the final of the men’s -60kg, but it was the other Georgian fighter, who was present on the tatami for the last fight of the category. Just before the first minute, SHUKVANI (GEO) scored a first yuko. Following a high rhythm, the two right handed judoka, kept trying finding the opening in their opponent’s defense, but with no success until the last 52 seconds, when the Georgian swept away (de-ashi-barai) the foot of SANTOS… for ippon ? No, the action was clearly outside and Betkili SHUKVANI had to wait the final gong to go to shake Peter Seisenbacher’s hand, the coach of the Georgian team.

World number 8, Amiran PAPINASHVILI, from Georgia, who is qualified for the London Games, entered the first semi-final after his win by ippon against Daniel MORAES (BRA), in quarter final. During the combat, despite a very tight fight, the Georgian seemed to dominate his opponent. But in front of an incredible public, SANTOS found the necessary energy to throw PAPINASHVILI for a waza-ari, only a few seconds before the end of the semi-final. Suddenly, the public exploded with joy and cheered SANTOS for his great performance. With the Brazilian entering the final, Amiran PAPINASHVILI took the bronze.

U66kg Denis Lavrentiev was able to take the gold medal. In the final against Argentinian Fernando GONZALES, was penalized with a shido for passivity. Then, the fight entered in a more dynamic phase with LAVRENTIEV trying to throw his opponent with a hip technic, while GONZALEZ was trying to counter attack him. But actually, the final suddenly ended with a precise and quick armlock, executed by LAVRENTIEV.

With no surprise, number one seeded, Lasha SHAVDATUASHVILI (GEO) was present among the four athletes qualified for the final block. In his semi-final, he fought against the Russian, Denis LAVRENTIEV, who after 1:44 scored ippon with a o-uchi-gari that pushed the two athletes outside the competition area.