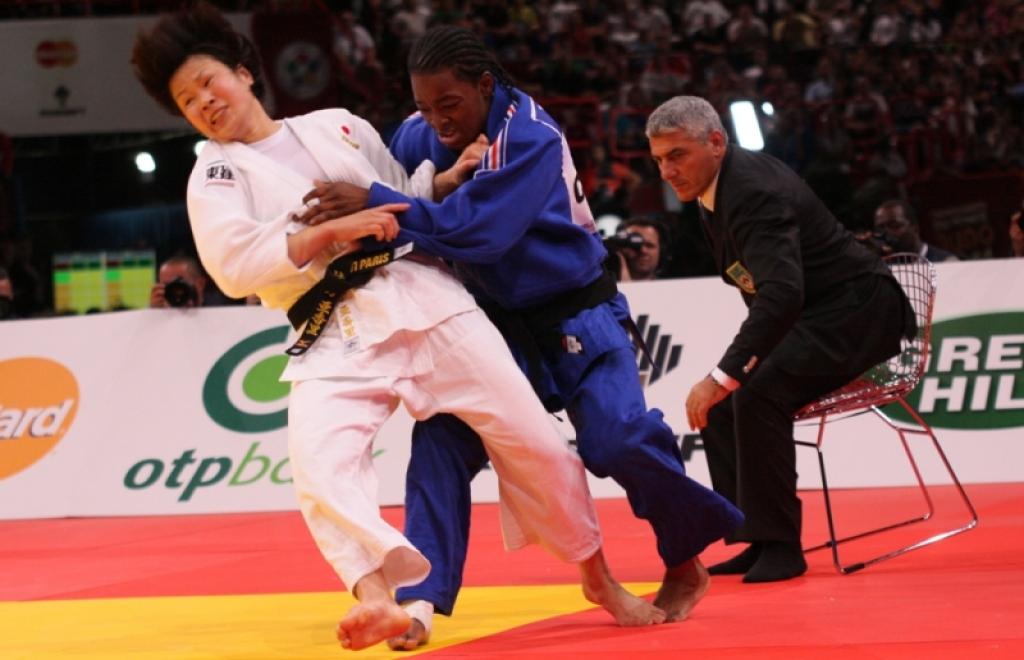 France grabbed two more women’s gold medals while the Greek Olympic titleholder Ilias Iliadis produced a magnificent display of powerfully efficient judo to win the men’s under 90 kgs class on the fourth day of the 29th World Championships in Paris on Friday.

France’s two victories in the under 70kgs and and under 78 kgs classes to add to the Under 63 kgs title, secured on Thursday by Gevrise Emane, have now brought the host nation a total of three gold medals, with their most celebrated fighter, heavyweight Teddy Riner, due on the mat on Saturday when the individual competitions end.
With the French victories of Gevrise Emane, Audrey Tcheumeo and Lucie Decosse Europe collected more world titles than last year.

Europe won annother gold in the only men’s division on Friday which was dominated by Ilias Iliadis, who apart from his triumph in Beijing is the defending world champion and reigning European title-holder. He is particularly dangerous whenever the fighters are at close quaters and even Riner himself, who weighs 40 kgs more than the Greek, respects him whenever they practise together.

Opponents fear getting too close to him but, sometimes, he just penetrates their guard and then hurls them to the ground. With 41 seconds left of his semi-final against the Russian Kirill Denisov, the Greek, who is of Georgian extraction, upended his opponent and using his right thigh to aid the propulsion, dumped the Russian on his back with a pick-up throw, uranage.

This took him into the final against Japan’s Daiki Nishiyama, whom the Greek had defeated in the final in Tokyo last year. Nishiyama kept clear of Iliadis but eventually they closed together and with one minute 21 seconds left, the Greek tightened his grip and wheeled him to the mat with a throw somewhere between haraigoshi (sweeping hip throw) and oguruma (big wheel). He saluted the crowd, who rose to him in appreciation of his physical mastery.

The bronze medals were won by Takashi Ono of Japan and Asley Gonzalez of Cuba. Ono was down to the Korean Kyu-won Lee, who had gone ahead with a morote-seionage (double handed shoulder throw) for yuko and then scored a waza-ari with a leg grab. However Ono produced a tremendous uchimata for victory. Gonzalez always seems to need a couple of shidos to be stimulated to attack and sure enough he did this again against Denisov. After five minutes without any score, the fighters went into extra-time and Gonzalez was awarded a yuko for morote-seionage.

In the women’s under 78 kgs class, France’s Audrey Tcheumeo narrowly defeated Kayla Harrison of the United States in the semi-final. She scored a yuko with ouchigari (major inner throw) and then went on the defensive but the American could not make up the difference. In the final, the French girl was a revelation, producing a stunning right ankle sweep on Japan’s Akari Ogata for ippon and victory.
Motivated by her music she started aggresively and scored a fantastic point and cried, cried really hard and finally showed her emotions with beautiful tears.

Tcheumeo showed her class and delighted the crowd by pulling off this perfectly-timed footsweep to floor Ogata in the final. It was a clear cut victory and one that sent the crowd into a frenzy as the French had won two gold medals today.

The bronze medals went to Kayla Harrison, who defeated Marhinde Verkerk of the Netherlands, and Mayra Aguiar of Brazil, triumphant over the German Heide Wollert, with a magnificent uchimata (inner thigh throw).

The other women’s final, the under 70 kgs, between Lucie Decosse of France and the Dutch girl Edith Bosch was less enthralling but this was not the fault of Decosse. The Dutch girl was given three penalty points for failing to grip properly and being defensive and so Decosse retained her title without hardly being attacked.

The bronze medals went to Yoriko Kunihara of Japan, who defeated Onix Cortes of Cuba with uchimata for yuko, and Anett Meszaros of Hungary. She beat Rasa Sraka of Slovakia with an uchimata for yuko during which Sraka damaged her foot. Although she bravely tried to continue, she was forced to retire with 17 seconds left on the clock.