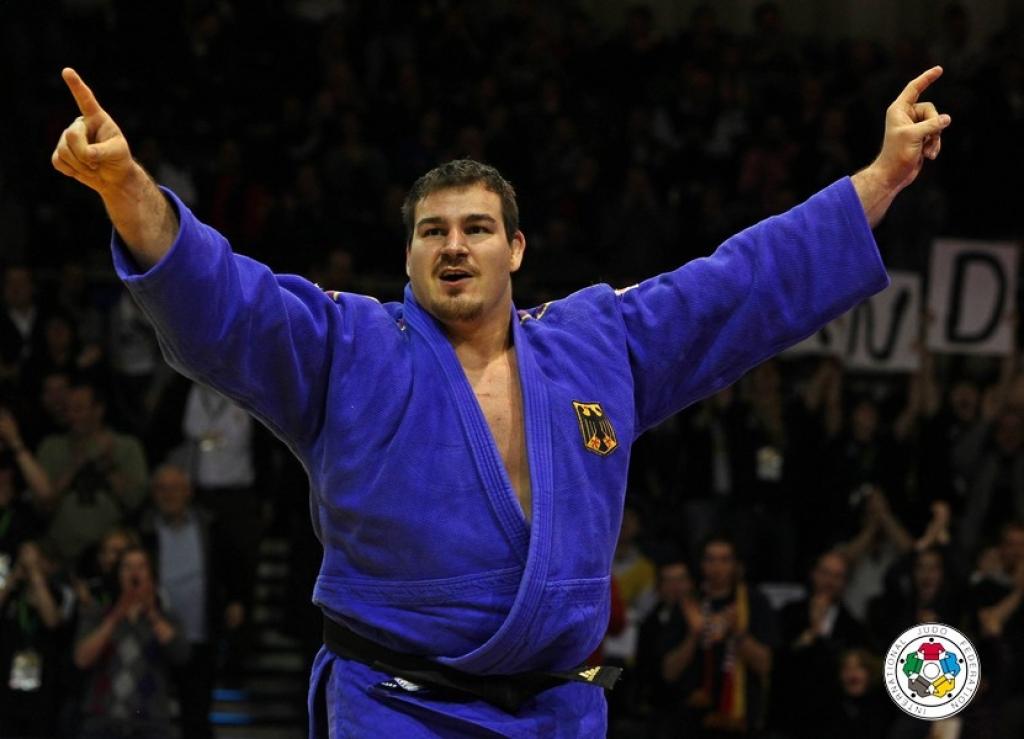 Andreas Toelzer has won the IJF Grand Prix in Düsseldorf. The German gave the crowd its first and only German win this weekend.
In the final he defeated former World and Olympic Champion Keiji Suzuki. Suzuki showed an extraordinary judo all day long, despite his light weight compared to Toelzer. During the first minute of the final, Suzuki proved once again that he could be dangerous at any time, but Toelzer was able to impose his fantastic power and thrown the Japanese by ippon.
The public became creasy and exploded with joy and happiness, the victory of Toelzer giving a perfect end to the Judo Grand Prix, Düsseldorf 2011. “The fans were terrific. I was carrying a small injury but that did not prevent me from giving my best” said the Bulle von Gladbach to the IJF Media team.
In the semi final Toelzer was opposed to his teammate Robert Zimmermann. Only 2:34 minutes were necessary for him to enter the final to fight against Suzuki (JPN).

Germany had another chance to gold in the final U78kg. Heide Wollert who was the title defender, lost her chance for prolongation against Monhgolian Lkhamdegd Purevjargal who destroyed Wollert with a great ippon. Lkhamdegd had previously defeated Olympic Champion Xiuli Yang (CHN). 2009 World Champion Marhinde Verkerk won bronze in Düsseldorf.

It may have been a long wait for Travis Stevens (USA) and the US men’s team, but the American from Tacoma, Washington Stevens finally won gold at an IJF Tour event. Not since Jimmy Pedro won the Tournoi de Paris in 1998 has a US male athlete scaled such heights.

In the women’s heavy weight category World Champion Mika Sugimoto regained her status and won the Grand Prix. Two weeks ago Lucija Polavder was blocked by Megumi Tachimoto in Paris, now it was the world champion who defeated the European Champion.

Travis Stevens was the surprise of the day winning the U81kg category. Stevens has battled hard these past few years on the international circuit and his “total effort” was rewarded with top place on the podium. Stevens, ranked 16 on the IJF World Ranking List (WRL) defeated Olympic Champion Ole Bischof (GER) by yuko with sumi gaeshi. The semi final was against Russian Arsen Pshmakhov to whom Stevens had lost in the Rotterdam Grand Prix in 2010.
In the final Murat Khabachirov was waiting who on his way to the final had defeated the number one seed Euan Burton (GBR) as well as the reigning Olympic champion at -73kg Elnur Mammadli (AZE).
Stevens, however, proved that his experience on the international circuit was good enough to see off the challenge of the young Russian U23 European Champion who despite this defeat is a worthy representative behind Ivan Nifontov and Sirazhudin Magomedov. It was a proud moment for Stevens who won his first gold medal at a World Cup and won the first gold for his country since Jason Morris won gold at a World Cup in 1990 in this comparable middleweight category (U78kg) in Tbilisi.

Marcus Nyman had a comparable milestone. The European Champion won the U90kg category in the final against Romain Buffet (FRA). Nyman is the third ever Swede to win a World Cup or Grand Prix. Ursula Myren and Gabriel Bengtsson were the previous Swedish winners of a World Cup. Myren won the first in 1992 in Budapest, Bengtsson was the last in 2002 in Rotterdam. Myren and Bengtsson both won two events, for Nyman it was his third World Cup medal after bronze in Prague and Qingdao last year.

31 Medals for Europe this weekend against twenty for Asia, but the nine gold medals against the three for Europe is convincingly enough that the European fighters have to work hard to compete for Olympic gold. All European gold medals were won by the men. None of the women’s titles were for Europe, six for Asia, one for Brazil’s Silva.