Toelzer Turns them over at Abu Dhabi Grand Prix 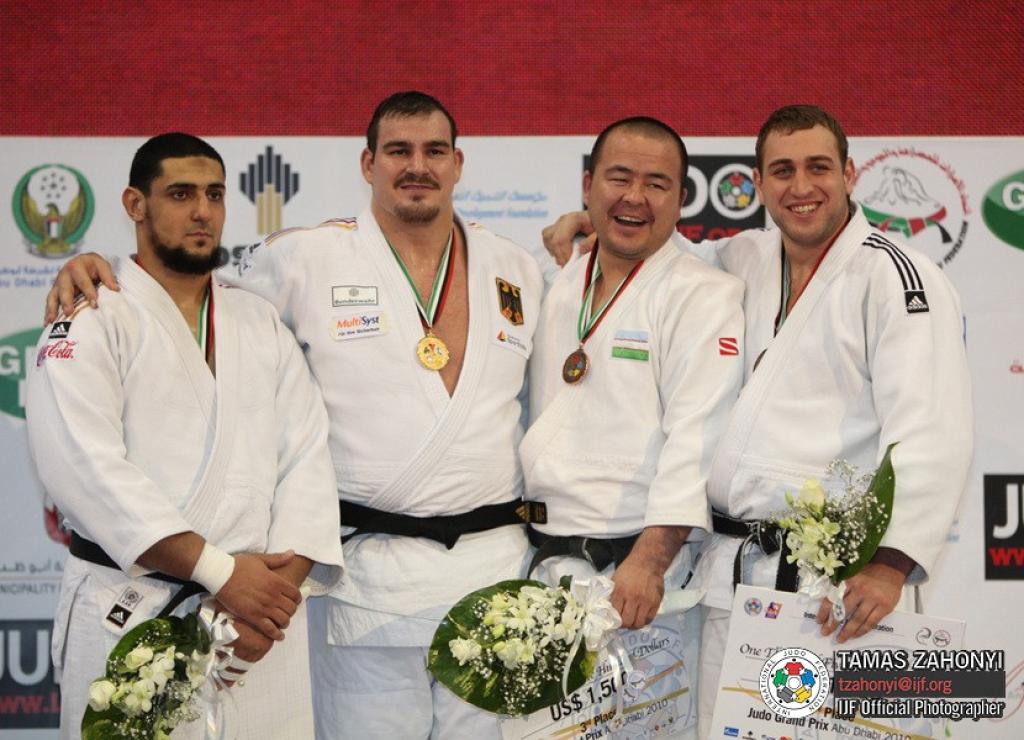 It’s been some while in coming, but Andreas Toelzer +100kg (GER) is finally able to enjoy his first Grand Prix gold medal at the third attempt.
The heavyweight German delivered a crushing all-round performance that saw him win all five of his contests by ippon. Toelzer began the day by demonstrating his now famous “Toelzer-Dreher” or turnover on the unsuspecting Bouaichaoui (ALG). Next to roll was Aslan Kambiev (RUS) who if he had been paying attention should have seen the turn coming. Angel Parra (ESP) avoided getting caught in newaza by Toelzer, but by now it was the German who was on a roll and he threw the Spaniard for ippon to book his place in the semi-final.
Meanwhile Olympic silver medalist Abdullo Tangriev (UZB) was making his way through the lower half of the draw for the anticipated match up with Toelzer. It was Tangriev who had defeated Toelzer in the second round at the Beijing Olympics. It could be that Tangriev had also not been paying attention during the day because he too felt victim to the Toelzer turnover. “It’s a really simple technique. Of course you have to keep moving all the time, to show progression so that the referee gives you time to develop the move”, said Toelzer who with that win found himself in the final. Facing him was Islam El Shehaby (EGY) ranked No. 2 in the world who had defeated all three of his opponents by ippon. The crowd were screaming for the Egyptian but the big man from Köln controlled the contest from the outset eventually putting El Shehaby away with Tani Otoshi for ippon.

At the end of the three days of competition, Max Schirnhofer (AUT) gets the vote for ippon of the day for his Te Guruma on Marcus Nyman (SWE).