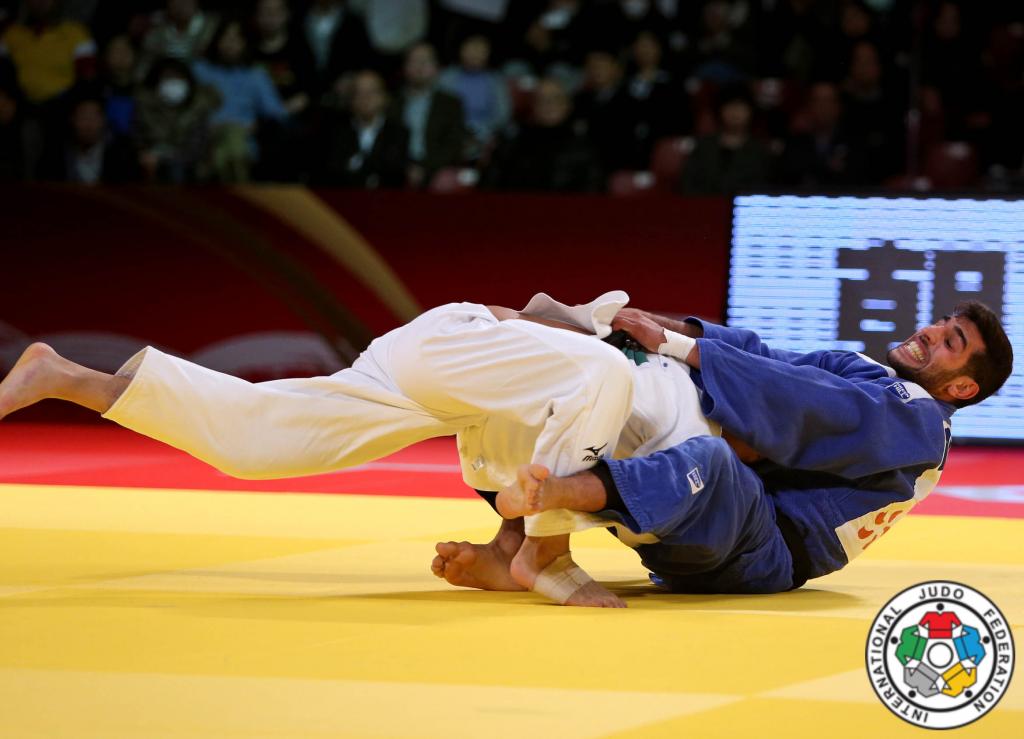 Israel’s Golan Pollack narrowly missed out on taking his first ever IJF Grand Slam title when he placed second in the -66kg category on the opening day at the Tokyo Grand Slam. Returning from a four month lay off due to a shoulder injury sustained in Baku, Pollack followed up his fifth place at the Jeju Grand Prix last week with his first appearance in an IJF Grand Slam final. In a field of 33 competitors that contained three times world champion Ebinuma Masashi JPN and the top six fighters from the IJF world ranking list, Pollack demonstrated that he belonged in the top flight.

After a first round bye Pollack began with a win by ippon over Japan’s Takajo Tomofumi to whom he had lost in the opening round in his only previous competitive outing in Japan in 2011. Pollack threw the Japanese with eri seoi nage for ippon, Takajo contributing to his downfall by bridging on landing. Argentinian Fernando Gonzalez was next up but Pollack caught him off balance twice and countered both times with te waza first for waza ari and then with 25 seconds left for ippon. In the quarter final Vazha Margvelashvili GEO attacked strongly with o uchi gari. But Pollack was quick to pull his opponent in close, block with the hips and counter powerfully with ko soto gake bringing the Georgian crashing down heavily for waza ari and straight into osaekomi from which Margvelashvili, clearly in some discomfort from the landing, submitted immediately. This put Pollack into the semi final where he faced Mikhail Pulyaev RUS. The only previous meeting between the pair (the Paris Grand Slam in 2012) had resulted in a win for Pollack. Both fighters collected shidos and, with very little time remaining, Pulyaev tried to force the pace with a weak sutemi waza effort that left the Russian caught in tate shio gatame, Pollack once again finishing in osaekomi for ippon. In the final Pollack faced current junior world champion Abe Hifumi JPN. In a close contest the 17 year old Japanese wunderkind got the better of the Pollack leaving the Israeli with the bitter sweet sensation of a podium finish at the Tokyo Grand Slam.

“We are back to Israel after this to begin preparing for our national championships on December 18th. After that we’ll come back here [Japan]
for training camps at Tokai and Nitadai universities. “I have dreamed about winning a medal at the Olympics. In fact after the dream I woke up and went to training with renewed motivation”, said Pollack. If coach and mentor Oren Smadja has his way Pollack will have his wish. “All our team work as one. They live and train at the Wingate Centre and have a terrific spirit. My only wish for Golan would be to see him improve on my own performances at world and Olympic level”, said Smadja. That will be no easy task as the current Israeli coach has an exemplary competition record. He also commands incredible respect from his players, a strong indication that he is doing a fine job for his country.