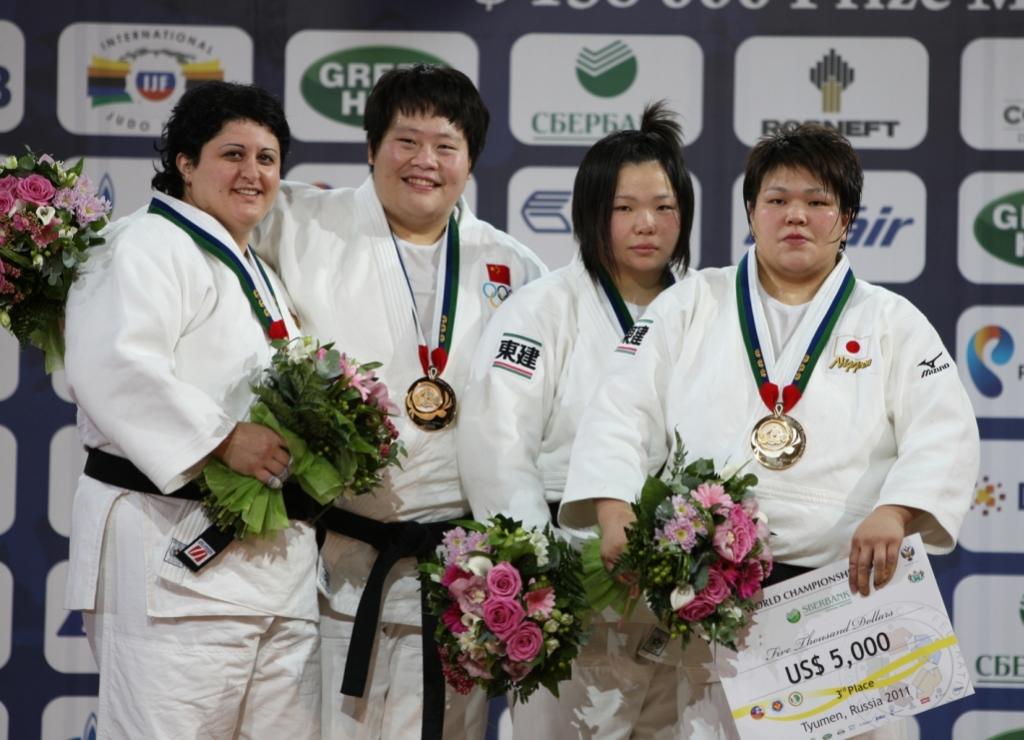 The first day of the Open World Championships in Tyumen 2011 offered some interesting and tense fights in the Open women’s category. All the favorites qualified for the semifinals, including the Olympic champion from the Beijing Olympic Games 2008, Wen TONG (China). The double World and defending champion from Tokyo 2010, Mika SUGIMOTO (Japan), qualified after two ippons along with the bronze medalist from the Athens Olympic Games 2004, Tea DONGUZASHVILI (Russia).

The fourth semifinalist was decided after a very tight fight, in Golden Score: Megumi TACHIMOTO (Japan), bronze at the Open category at World Championship in 2010 in Tokyo, defeated Qian QIN (China), double silver medalist at the same competition.

The Repechages: Nanami HASHIGUCHI (Japan) won by ippon against Nataly SOKOLOVA (Russia). In the second fight, the Chinese champion Qian QIN (China) get the victory by ippon against Iryna IADKOUSKAYA (Belarus).

The bronze medals were won by the Japanese Nanami HASHIGUCHI and Mika SUGIMOTO.

The final offered a very tense contest. The Chinese Olympic champion Wen TONG won the World title against the Russian public favorite Tea DONGUZASHVILI by ippon (makikomi into hold).
The IJF jury accorded the “Ippon award” to the Japanese Megumi TACHIMOTO, for her spectacular techniques, among them two “uchimata”, successfully applied.

It’s the seventh World title for Wen TONG, equal to Ryoko Tani, although she won seven in the same category at seven different World Championships in seven different years. TONG started in 2003 winning her first world title in Osaka. This year she won both world titles in plus and open category.

Watch photos of the winners here: