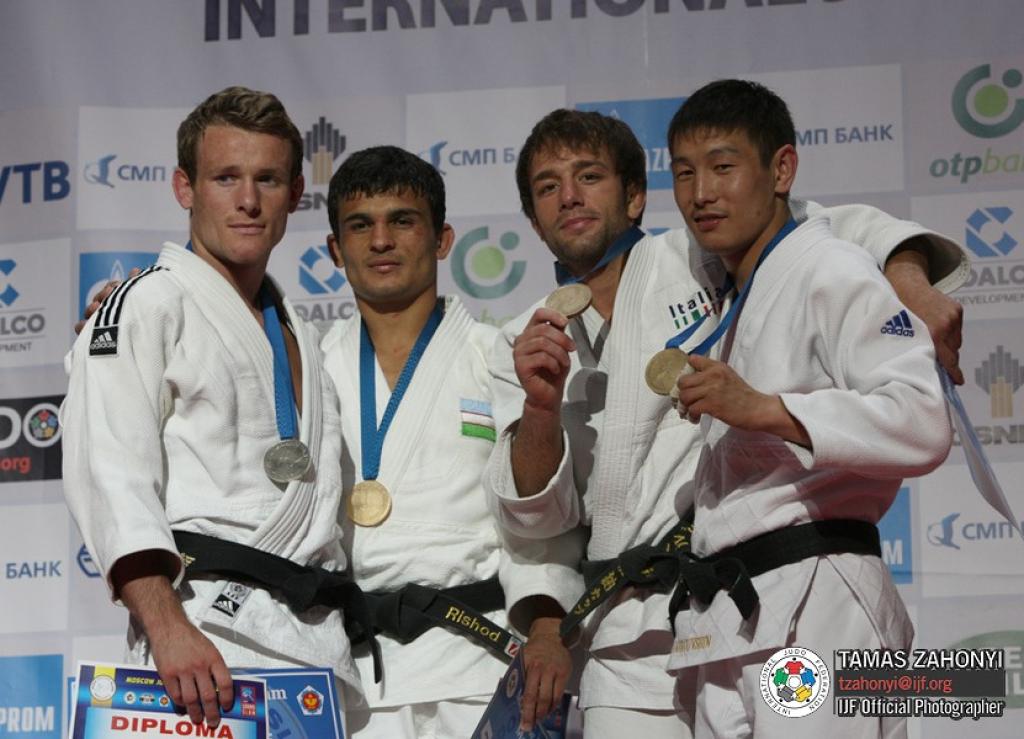 At the first day of Grand Slam of Moscow France took the lead by winning two categories, the same number of titles as Japan.

Last year Japan also won the U52kg category, now it was Yuki Nishida who won the final and gold in the Russian capital. Joana Ramos (POR) lost after three minutes by a second waza-ari for a seoi nage. Nishida had beaten home favourite and double European Champion Natalia Kuzyutina (RUS) in the semi final.

In the women’s category U57kg Sabrina Filzmoser took the title. It’s incredible how she got back in this category this year after giving it a try in the U63 division.
Filzmoser is actually still recovering from a shoulder injury.
A great general repetition for the Austrian fighter for the world in Tokio in September. In the final ‘Sabsi’ defeated Marlen Hein after five minutes by yuko. In the semi final Filzmoser defeated former triple European Champion Telma Monteiro (POR).

In the U63kg category the Japanese and Dutch are dominant this year together with Claudia Malzahn (GER) and Gevrise Emane (FRA). The last one reached the final today after a comfortable draw. The world’s number four didn’t have to fight European Champion Elisabeth Willeboordse (NED) who lost in the first round to Faith Pitman (GBR). But Emane did have to fight the second Dutch fighter Anicka van Emden, who she had met in the final of the GS in Paris as well. In Paris Emane took the title, and today didn’t have much trouble with Van Emden again. From the beginning she took a comfortable lead and only built out the score and finally outscored Van Emden by ippon in the last minute.
The Dutch defeated Claudia Malzahn, winner of the GP of Düsseldorf in the semi final and the best Japanese, Yoshie Ueno, was not present in Moscow.

In the men’s category it was Rishod Sobirov (UZB) who won the title. Sobirov also won the Masters in Suwon and the GP of Tunis this year, but lost the final at the Grand Slam of Paris and Rio. The winner in Rio, the world’s number one Hiroaki Hiraoka (JPN) lost his first bout against Kazach Yerkebulan Kossayev.
Sobirov defeated Dutch Jeroen Mooren in the final who had an excellent weekend after seeing Holland beating Brazil and taking silver in Moscow, but it could have been better if he took his first Grand Slam. Mooren was countered after three minutes in the match by Sobirov who easily defended the lead in the last 90 seconds.

Musa Mogushkov was the only Russian on Saturday to win for the home crowd. Mogushkov won the final U66kg to Kim Joo-Jin. The Korean couldn’t stand the pressure after two minutes in the match and was pressed to the ground.
Mogushkov had beaten world champion Khasbaatar Tsagaanbaatar (MGL) in the quarter final and vice European Champion Miklos Ungvari in the semi, so a well deserved victory.

Benjamin Darbelet (FRA) was the surprising winner U73kg. The French vice Olympic Champion finished fifth in both Paris as Rio, but today he was the best among 49 participants. He defeated Bang Gui-Man (KOR) in the final, the highest seated player, ranked third.

On Sunday more action from Moscow.