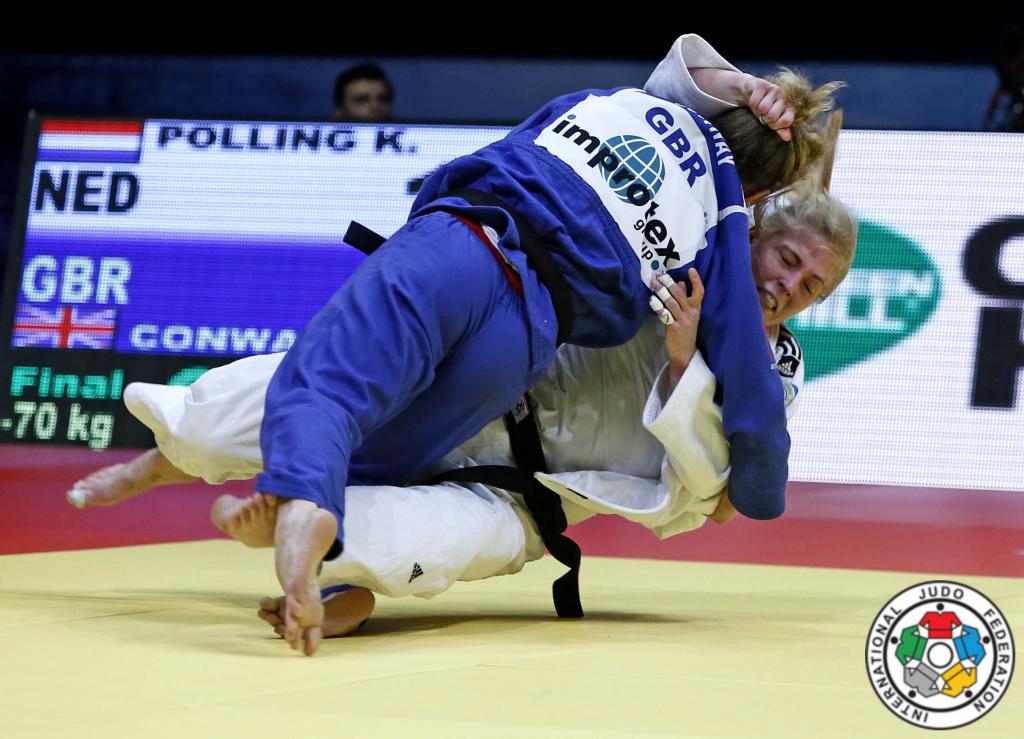 The modern use of the term warrior is generally understood to refer to those who have shown great vigour, courage, and aggressiveness. In which case it is probably fair to say that Sally Conway GBR has proved her credentials as a warrior. Russian novelist Leo Tolstoy maintained, “The strongest of all warriors are these two — Time and Patience.” Conway has been extremely patient in waiting for her first IJF Grand Slam title and today her time came. Seeded here number three behind world number one Kim Polling NED, and number two seed Bernadette Graf AUT, Conway began her day with a win by ippon over Samantha Bleier of the USA. Next came the fast-improving Szaundra Diedrich GER whom Conway also defeated by ippon. This brought about a semi final contest against world number five Bernadette Graf whom Conway had defeated on their only previous meeting. This time Conway narrowly edged past the Austrian who picked up one shido to give Conway the advantage at the end of the contest. The reward was a place in the final (a repeat of last year’s final) against Polling. The Dutch fighter scored first with de ashai braai and held the lead until with only eleven seconds left on the clock Conway launched a huge right sided o uchi gari that levelled Polling for ippon. “Winning a Grand Slam had been on my mind for a long time. I set out today to take one fight at a time, concentrate on what I knew I needed to do and today it paid off,” said Conway. It was Conway’s third medal in three years in Baku, improving from third in 2013, second in 2014 to first today. “There are times when you simply have to keep believing in yourself and I remain determined to become European and world champion. But, of course, I’d like to be on that podium in Rio in 2016,” said Conway.

There were gold medal winning performances too from Rustam Orujov AZE in the -73kg category, Khasan Kahlmurzaev RUS in the -81kg category, and in the -63kg category for Katrin Unterwurzacher AUT.