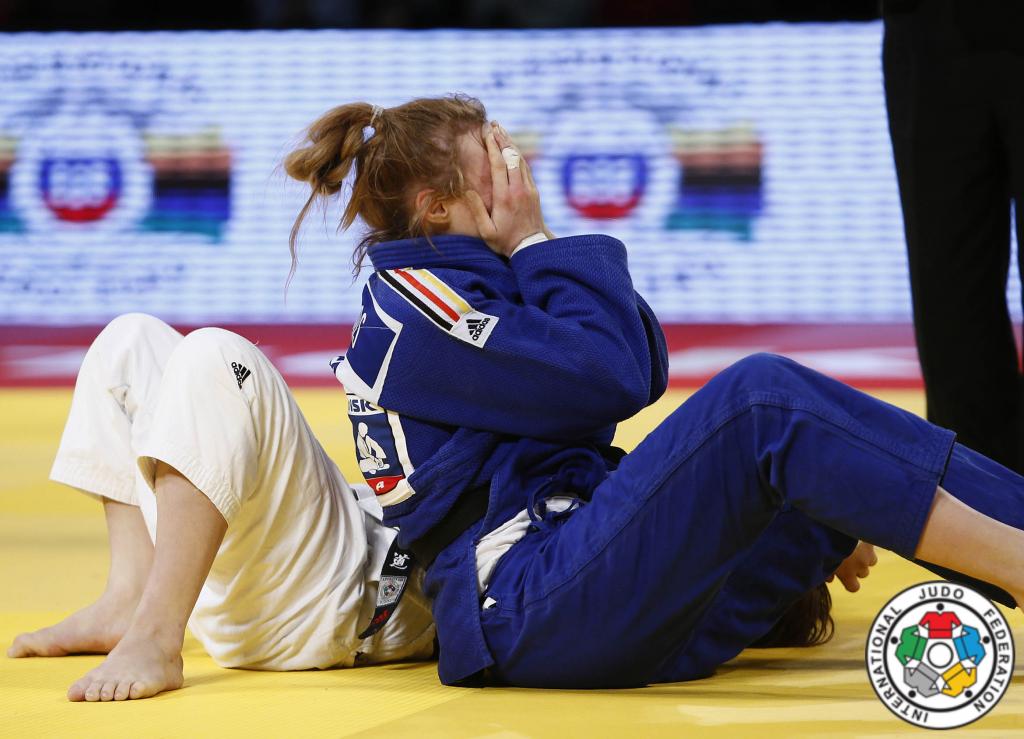 It is always a proud moment to celebrate a gold medal winning performance and to have one’s national flag raised whilst the anthem is played. Martyna TRAJDOS (GER) did just that and triggered celebrations for the small number of German supporters at the Metropolitan Gymnasium by winning gold in the -63kg category on the second day of competition at the Tokyo Grand Slam.

Trajdos, seeded number two, had the benefit of a first round bye before facing NOUCHI Aimi (JPN). The 19 year-old Japanese found it difficult going against the more experienced German and gave up three shidos that saw Trajdos advance to the quarter final. Here Trajdos faced Katharina HAECKER (AUS) whom the German threw with left uchi mata for yuko then held with kesa gatame for ippon. In the semi final Trajdos edged past Anicka VAN EMDEN (NED), the Dutch fighter picking up two shidos whilst Trajdos collected just the one.

The final saw Trajdos up against current world champion and number one seed Tina TRSTENJAK (SLO) against whom Trajdos had an unenviable 1-7 losing record. To add her Tokyo woes, Trajdos had not found the podium on her two previous visits to the Tokyo Grand Slam. Trstenjak scored yuko with ura nage to take the lead. But Trajdos responded quickly when, from the ensuing ne waza exchange, she managed to secure kesa gatame after a prolonged but ultimately in vain defence of the leg by Trstenjak. There was visible relief from Trajdos more from the defeat of her nemesis Trstenjak than her Grand Slam gold medal; that latter fact would sink in some moments later.

When asked about the motivation behind today’s win Trajdos said, “I’m really tired now that I’ve come to the end of the year. But I did not want to miss Tokyo and have always wanted to take a medal here. I had lots of support from my coach, team mates and it was a real bonus to have my boyfriend in the audience. I told myself on the way to the tatami I don’t want to lose in front of him.” With regard to the difficulty of coming to Tokyo, the prospect of facing several Japanese and taking a medal Trajdos said, “I have confidence in my abilities but it certainly helps to be encouraged by those I trust when I see how much they believe in me.”

With the holiday season fast approaching, Trajdos still has some judo left in her. “I’ll be staying for the training camp before heading back home to take a break over the Christmas period,” said Trajdos. German coach Michael Bazynski said that, “Quite often Martyna will begin strongly and then not be able to maintain that tempo throughout the day. It was different today and she managed to bring the same level of intensity to the end.”