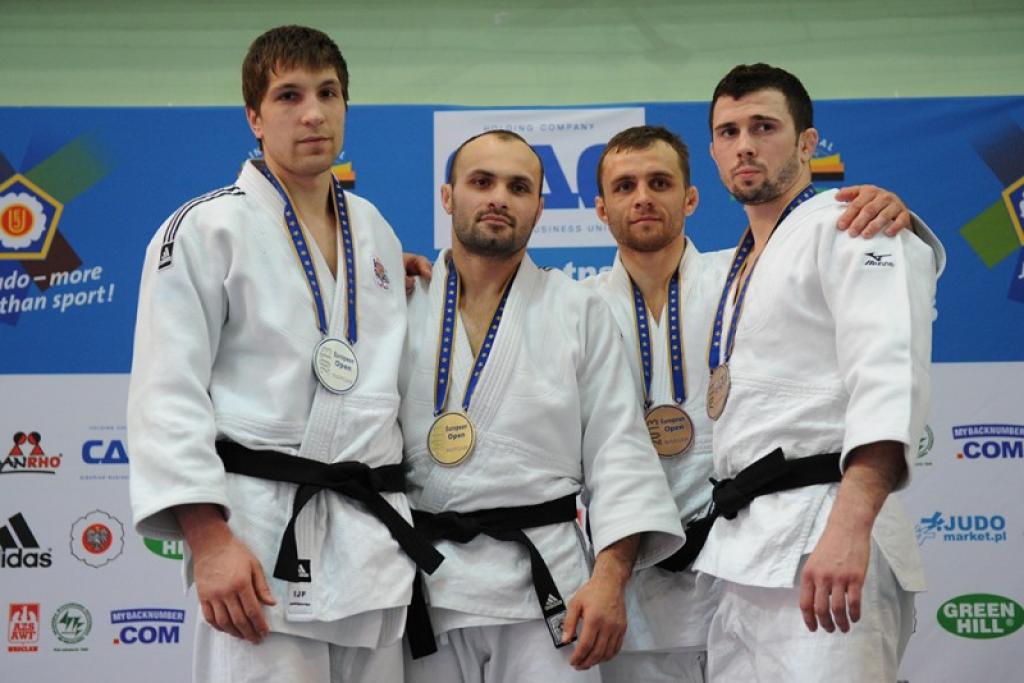 At the second day of the European Open for men in Warsaw four different nations won a gold medal. In the end it was Georgia to win two gold medals over the weekend. Today Levan Tsiklauri added the second. Tsiklauri was expected to win, but the way he performed was impressive and a well-deserved gold medal. In the final he defeated Konstantin Ovchinnikov of Latvia. Again a gold medal for Georgia that won gold at the European Open in Tbilisi as well as the Grand Slam in Paris and GP in Düsseldorf. Last week in Germany Avtandil Tchrikishvili rules the category U81kg, now it was Tsiklauri who reached the final with a powerful and excellent ippon against Maxim Buga.

For Latvia it was the first international medal in 2013, the third for Ovchinnikov, each year one so far since 2011.

Milan Randl (SLV) was the highest seeded judoka at the draw in the division U90kg. Today he finished third and was the only highest seeded player who made it to the final stage. The winner though was Marc Odenthal, the 22-year old number two of his country. He had an excellent day under the guidance of German veteran Frank Möller. Odenthal defeated five opponents including highest seeded Randl, and completed the mission in a team of youngsters from Germany. It was his first international victory at World Cup level. In the final he defeated Ludovic Gobert of France.

Israel won a second gold medal this weekend, one in the women’s European Open in Prague and Or Sasson closed his final bout with a smashing ippon against Toma Nikiforov (BEL) in an attractive final. It was the Belgian who started with the action but the strong Nikiforov took over the match and the last action of Nikiforov to take the gold. Sasson is in a good shape, he also won the European Open in Tbilisi one month ago. In the same weekend, one year ago in Prague, Sasson took his first World Cup, now he won his second, but now named different as European Open.

David Alarza, the most decorated judoka of all 301 participants in Warsaw, added his 27th World Cup medal, this time bronze. Ten years ago he won bronze at the age of 26, if you can count, you can imagine he is the oldest international medallist this year. He is the oldest European male medallist of the last 10 years. He has to fight another 3 years to improve the overall record of his compatriot Isabel Fernandez who a medal at the age of 40, last year in … Warsaw to complete the statistic.

The second bronze medal was for French Clement Delvert who lost the semi final against Nikiforov.

The final +100kg wasn’t held, only a bow to take the gold for Sergey Prokin as  his Russian compatriot Renat Saidov was injured to fight for gold. Alessia Mascetti (ITA) defeated good old Martin Padar of Estonia for bronze, but Juhan Mettis, the new generation was very happy to win the bronze for Estonia a minute before Padar lost. So still a good start of the new headcoach Alexey Budolin.

A satisfying weekend for Georgia again and Kazachstan that won three medals on Saturday U60kg.

Review the event in our media section with all the pictures, results.